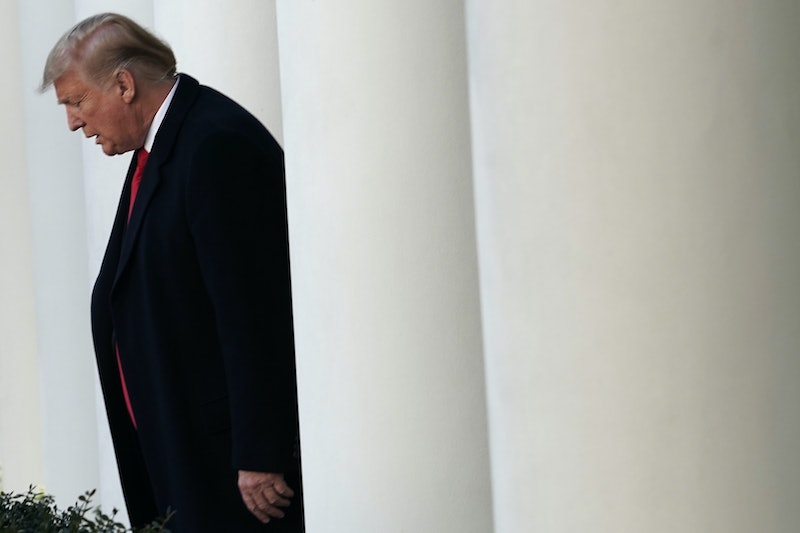 On Tuesday afternoon, the husband of Kellyanne Conway lashed out hard at POTUS. George Conway's latest Trump tweet might have been the most blunt critique of the president yet; despite his wife's deep involvement with the Trump administration, Conway has long been an outspoken critic of POTUS, and frequently airs his grievances on Twitter. This time, Conway went for the jugular.

But first, Trump had to tweet something, himself. POTUS tweeted his own insult out on Tuesday morning, attacking former White House communications aide Cliff Sims for his new tell-all book, Team of Vipers. Trump wrote,

A low level staffer that I hardly knew named Cliff Sims wrote yet another boring book based on made up stories and fiction. He pretended to be an insider when in fact he was nothing more than a gofer. He signed a non-disclosure agreement. He is a mess!

A few hours after that tweet went live, Conway decided to put in his own two cents. Quoting Trump's tweet, Conway wrote, "Your stupidity knows no bounds."

Earlier on Tuesday, Conway also shared an article by The Washington Post which held a series of statistics about how Americans perceive Trump on a number of levels, based on a Post/ABC poll. Conway added to the tweeted link, "Americans’ low opinion of their inept and mendacious president, in numbers."

Conway's Twitter feed is a treasure trove of retweets, quoted tweets, and original tweets that highlight the many perceived flaws of POTUS — with a few Corgi shoutouts every once in a while to lighten the mood. Although the lawyer has nowhere near the following of POTUS (who currently boasts 57 million followers on Twitter), he has slowly developed a pretty robust follow count of his own, with 327,000 followers and counting.

Conway also roasted Trump's lawyer, Rudy Giuliani, in a similar understated fashion on Jan. 21. Following the release of a statement by Giuliani in which he claimed some of his earlier statements were "hypothetical" and "not based on real conversations with Trump," Conway tweeted, "Translation: 'I just made s**t up.'"

The polar political extremes of the Conway household have definitely confused people in the last few months, especially given Conway's increasingly outspoken criticism of the president. In an August profile of the married couple, Kellyanne said to The Washington Post, “I feel there’s a part of [my husband] that thinks I chose Donald Trump over him. Which is ridiculous. One is my work and one is my marriage.”

She added, "I think it’s disrespectful. I think it disrespects his wife.”

As for Conway, he's the reason Kellyanne knows Trump, to begin with. Per The Washington Post, the Conways lived in an apartment in Manhattan's World Trump Tower in 2001 after they were married, and when Conway was offered to join the condo's advisory board, he declined and passed the offer along to Kellyanne.

Conway said to the Post, “Knowing what I know now. I would have said no, and never mentioned it when I got home.”