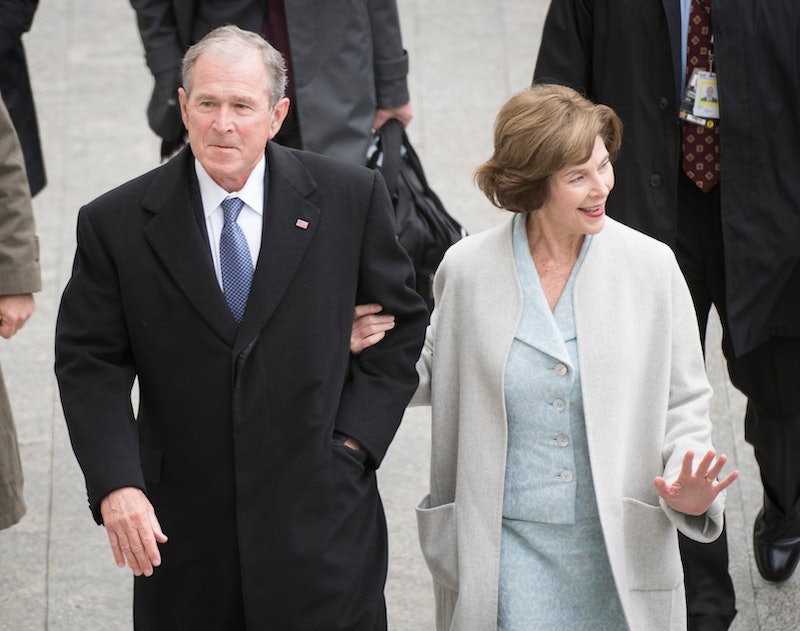 Welcome back into the world of memes, George W. Bush. Donald Trump's inauguration called for rain and it delivered. And former President Bush was well-prepared with a poncho handy. What he didn't have handy was someone to help him put it on, and the internet took notice. Bush struggling with a poncho at the inauguration will go down in the 2017 political meme history books.

Individual and company tweeters alike poked fun at Bush's inability to properly protect himself from the rain. Barack Obama, who is in the foreground of many of the Bush-poncho photos, looks remarkably undistracted by the 43rd president's struggles. Meanwhile, a cowboy hat-wearing Dick Cheney, who is pictured seated behind Bush, looks amused. Bush's vice president wasn't the only person who seemed to find joy in it. For some online, Bush's dance with his rain gear was a welcome diversion from what was happening on the inaugural stage.

And though Bush caught the most attention for it, Hillary Clinton was also roasted on Twitter for struggling to put her poncho on over her head. The Hartford Courant reports that everyone in the stands had a plastic poncho provided to them, as umbrellas were banned for security reasons.

Thanks For The Laughs

The Struggle Is Real

Well, This Is Distracting

We See You, Cheney

Bush wasn't the only one struggling to make the poncho look work, although at least Jon Voight managed to get into his.

This isn't the first time Bush has gotten attention for having trouble controlling a poncho. Back in 2008, the former president sported, and struggled with, a traditional Peruvian poncho while posing for photos at the APEC summit in Lima.

Bush's presence at the inauguration was one of his few public appearances as of late. It's been reported that he has been spending much of his free time engaging his love of painting. Bush's most recent project was painting portraits of soldiers who had been wounded "carrying out my orders."

And while we're talking about Bush wearing ponchos:

The former president was accompanied at Trump's inauguration by his wife, Laura. George H.W. and Barbara Bush were absent as they are both currently checked into the Houston Methodist Hospital for separate medical problems. In a Jan. 10 note to Trump, H.W. wrote, "My doctor says if I sit outside in January, it will likely put me six feet under. Same for Barbara. So I guess we’re stuck in Texas.”

As for the younger George Bush, if this is the last we'll see of him for a while, at least we have the image of him flailing in a poncho to hold on to until next time.

More like this
Christina Aguilera Took A Powerful Stand At Brighton Pride
By Sam Ramsden
Are John Legend & Kanye West Still Friends? The Singer’s Latest Update Is Candid
By Brad Witter
'Scream’s Courteney Cox Has Broken A Major Horror Record
By Sophie McEvoy
The Best Memes & Tweets About Rachel's Group Date On 'The Bachelorette'
By Alyssa Lapid
Get Even More From Bustle — Sign Up For The Newsletter