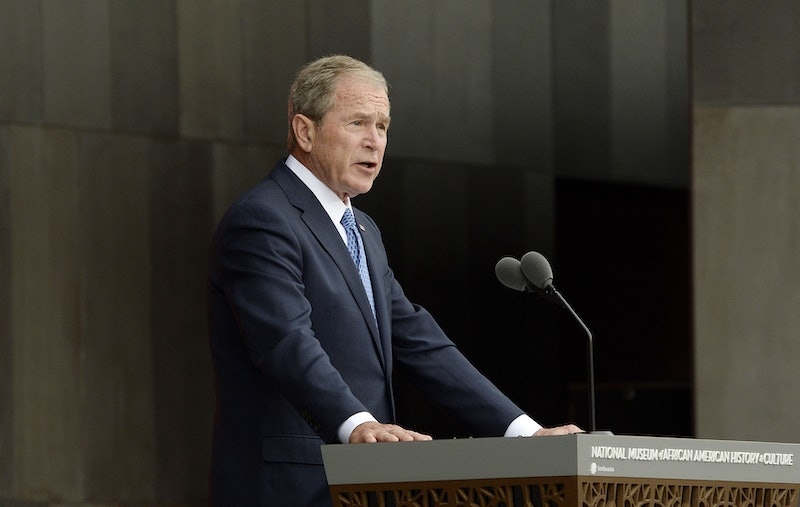 Former President George W. Bush appeared on NBC's Today show on Monday to promote his book Portraits of Courage, but during his interview with Matt Lauer, Bush contradicted President Trump's statements on the media. When asked if he ever viewed the press as an "enemy" during his administration, he responded:

"I consider the media to be indispensable to democracy. That we need an independent media to hold people like me to account. I mean, power can be very addictive, and it can be corrosive, and it's important for the media to call to account people who abuse their power, whether it be here or elsewhere. One of the things I spent a lot of time doing was trying to convince a person like Vladimir Putin, for example, to accept the notion of an independent press. It's kind of hard, you know, to tell others to have an independent free press when we're not willing to have one ourselves."

His comments come after the president's escalating battle against journalists. On Friday, White House Press Secretary Sean Spicer made headlines after he barred multiple news outlets — including the New York Times, POLITICO, CNN, BuzzFeed, and the Los Angeles Times — from a press briefing. On Saturday, Trump announced via Twitter that he would not be attending the annual White House Correspondents' Association Dinner, an event whose proceeds are dedicated to raising money for journalism students and journalism awards. On Feb. 17, he declared the media to be the "enemy" of the American people.

Freedom of the press is a constitutional right protected by the First Amendment. As former President Bush said, it's vital that this freedom exists in a democratic society. By having a press that can freely and directly question political leaders, it's tougher for those in power to get away with abusing their authority, lying to or intentionally misleading the public, or keeping criminal activity hidden from the general population. By agreeing to take questions from journalists, a president demonstrates his or her respect for the people's right to know the truth.

During President Trump's recent, unplanned press conference, he lambasted the media for "fake" news stories, resulting in a display of not knowing the difference between news outlets spreading falsehoods and those merely publishing unflattering stories. When asked to explain his statement "The leaks are real, the news is fake," the president focused more on the tone of the stories being published rather than on whether or not the claims being made in said stories are factually true.

According to a Sunday report from POLITICO, Spicer and others in the administration, growing even more frustrated with the onslaught of information leaking from the White House, are reportedly cracking down on their staff to prevent communication with reporters. Random phone checks are expected to take place more frequently. Staffers are reportedly fearing the notion of firings will be the next step. Bustle has reached out to the White House for comment.

Trump would do well to listen to Bush's message on the indispensability of the press. But even if he doesn't, those in media must push forward, regardless of what roadblocks the new administration attempts to implement.