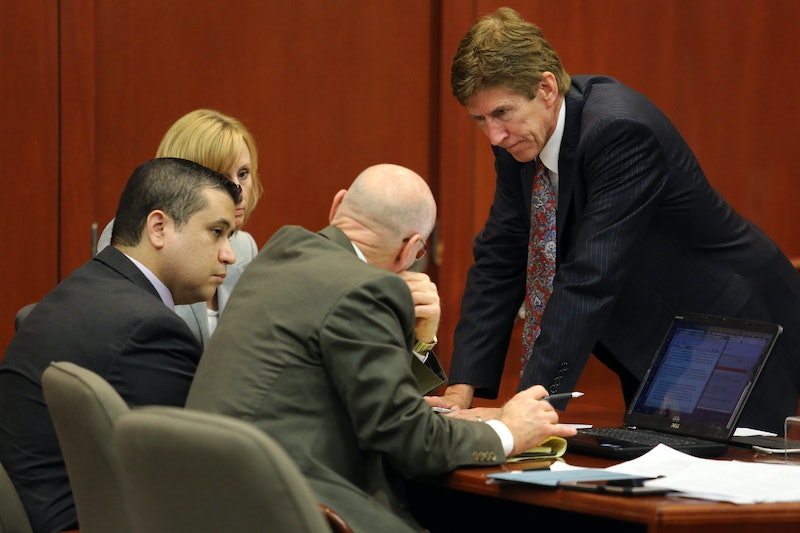 Perhaps no other case of the 21st century has had as profound an impact on the nation as the George Zimmerman trial. Zimmerman, who stood accused of second-degree murder and manslaughter in the death of Trayvon Martin, an unarmed 17-year-old black man, was ultimately acquitted, sparking protests across the nation and launching the Black Lives Matter movement. The case also provided the impetus for national criticism of Florida's "stand your ground law"— yet, Zimmerman's legal team never actually used "stand your ground" during his defense, according to the Oxygen series The Jury Speaks.

"Stand your ground" is a law that excuses the use of deadly force if the defendant felt threatened for their life. Though highly controversial, in the case of Zimmerman, the use of this law seemed a natural defense, since the fatal shots were issued during a scuffle between Martin and Zimmerman. Yet, as discussed in the July 24 episode of The Jury Speaks, the defense chose not to invoke "stand your ground". Instead, they cited self-defense to support Zimmerman's not guilty plea.

Zimmerman's lawyers have not been forthcoming regarding their reasons for rejecting this legal route. CNN reported that Benjamin Crump, the lawyer for the Martin family, stated in a press release regarding the defense's decision not to use "stand your ground":

"We believe the defense's decision to waive a pretrial hearing and to merge the 'stand your ground' hearing into the trial is to prevent putting George Zimmerman on the stand and to preclude the public and the potential jury pool from previewing the many inconsistencies in George Zimmerman's story."

Despite fact that Zimmerman's defense team chose not to invoke "stand your ground", the controversial law still had profound impact on the results of the trial. Jury instructions included a charge to consider "stand your ground," according to The Washington Post. And some jurors have since admitted that they considered the law when arriving at their not-guilty verdict. Maddy Rivera, the only non-white juror on the Zimmerman case, echoed this sentiment when speaking to Bustle at an event for The Jury Speaks.

"In this world it’s crazy to say that you can kill somebody and have a reason to kill them," Rivera explains. "'Cause as long as, what was told to me, as long as he felt like he was threatened, he was able to use his gun 'cause he was licensed to carry, and he was licensed to take it wherever he wanted, which I believe they shouldn’t do that."

Rivera also invoked "stand your ground" by name while speaking to Bustle about how a similar event could be prevented in the future. "So, that’s one of the good ways we can change the law, to stop the, what is the law called? It’s called stand your ground. But that’s, you should stand your ground if you have like a license to carry and you’re a police officer."

Clearly, the inclusion of "stand your ground" in the jury instructions was enough to impact the decision of some of the jurors, even though Zimmerman's defense team didn't explicitly employ the law. And on the national scene, reaction was such that it seemed as if Zimmerman's lawyers had been using that defense from the very beginning. Zimmerman's acquittal sparked national criticism of "stand your ground", and Reuters reported that in July, a Florida state court judge ruled new portions of the law unconstitutional, signaling a potential change regarding the use of this controversial legislation.

Yet these changes may not come soon enough to prevent others from benefitting from "stand your ground," whether used as an explicit defense or not. And according to Rivera, laws such as "stand your ground" perpetually work to protect perpetrators over victims. "That mistake was already written," she says. "We gotta follow the law."

More like this
Andrea Arlington, Alexis Neiers Haines’ Mother, Now Works As A Life Coach
By Morgan Leigh Davies
Glenda Cleveland Died 2 Decades After Trying To Turn In Neighbor Jeffery Dahmer
By Brad Witter
Alleged Cult Leader Larry Ray Is Awaiting Sentencing Following His Conviction
By Brad Witter
Where Is The Bling Ring’s Rachel Lee Now?
By Arya Roshanian
Get Even More From Bustle — Sign Up For The Newsletter