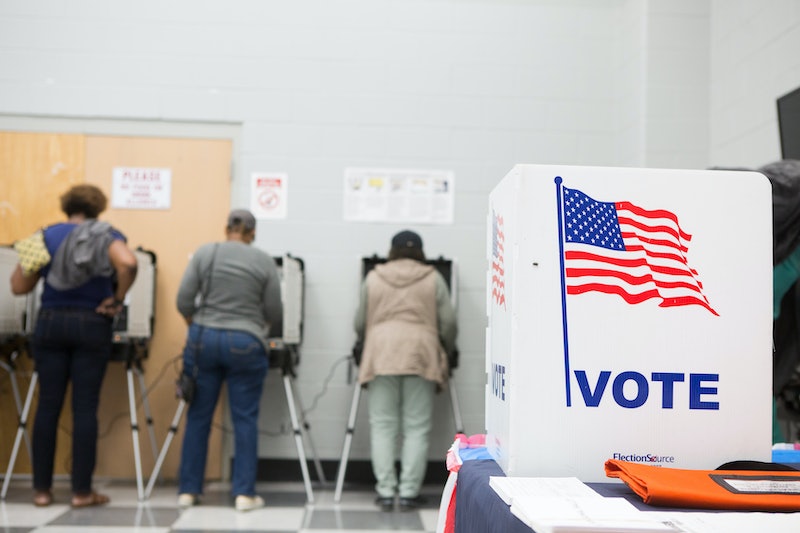 Early voting in Georgia started on Monday, and according to the ACLU, ballots are already being thrown out due to strict voting laws. On Wednesday, the ACLU of Georgia sued to rectify a "signature mismatch" law, naming Georgia's secretary of state Brian Kemp, as well as all county registrars as defendants. Bustle has reached out to Kemp's campaign for comment.

"Georgia does not notify voters before their ballots are rejected," the organization said in a statement. "Nor does it provide them an opportunity to contest the determination."

This isn't the first lawsuit the ACLU has filed against Kemp, a Republican who is also currently running for governor against Democrat Stacey Abrams. Last week the organization sued him over Georgia's "exact match" law, which requires all personal information included on voter registration forms to match the state's database. A missed punctuation mark or absent middle name can get voters placed on a "pending" registration list, according to Reuters. The ACLU says there are currently more than 50,000 names on that list and accused Kemp of using the law to swing the gubernatorial race in his favor.

Slate reported that almost 500 absentee ballots in Gwinnett County, Georgia, have already been rejected due to the signature mismatch law, and that minority voters are disproportionately affected. According to the ACLU, signatures vary for a number of reasons, including disability, age, and language capability. According to them, elderly people and people who speak English as a second language are more likely to provide differing signatures. Additionally, disabled people are more likely to vote by mail, making them much more susceptible to a voided ballot.

Other states like New Hamsphire and Florida have had run-ins with signature mismatch laws, particularly for the relatively arbitrary nature of determining whether two signatures are identical or not. A forensic examiner testified when the ACLU sued New Hampshire over their signature mismatch law, saying an effective handwriting comparison would require 10 sample signatures "at minimum." The Miami Herald also reported last month that black and Hispanic Floridians were much more likely to have their mail-in ballots rejected than their white counterparts.

Right now, the ACLU of Georgia is demanding a temporary restraining order on the law, to "stop an ongoing constitutional train wreck that threatens to disenfranchise potentially hundreds, if not thousands, of voters." Abrams herself has called the restrictions on voting an effort by Kemp to suppress voters before the general election next month. In an interview with CNN's Jake Tapper on Sunday, she said, "When you know what you're doing is going to have a disproportionate effect on people of color and on women, and you do it anyway, that erodes the public trust in the system, and that's problematic."