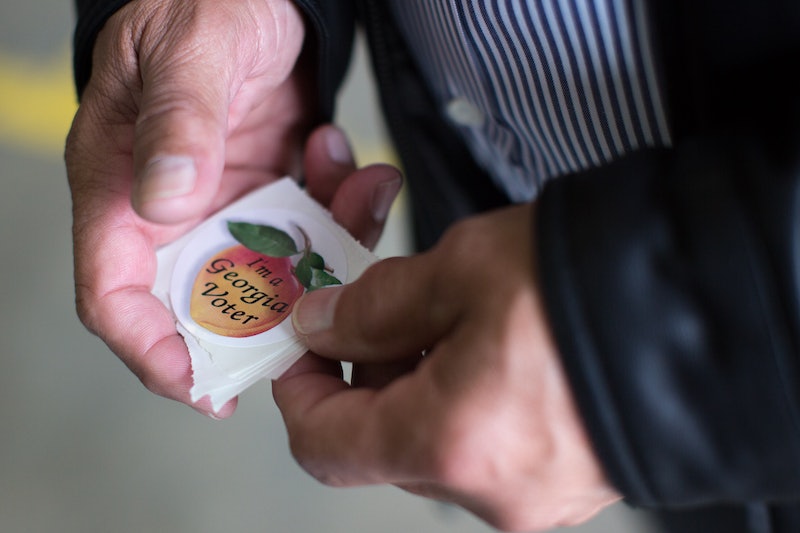 As the midterm elections approach, some surprising state voting rules are receiving a lot of scrutiny. For example, last year, Georgia's "use it or lose it" voter registration rule resulted in the removal of over 100,000 people from the voter registration rolls, according to an American Public Media (APM) investigation. For the most part, these people were removed from the state's registry simply because they didn't vote or make contact with election officials in a seven-year period of time. These "use it or lose it" removals could stand to significantly impact the outcome of November's midterm elections, in Georgia and beyond.

Georgia's voter roll purge was led by Republican Secretary of State Brian Kemp in July 2017, APM reported. Kemp has argued that the "use or lose it" rule keeps voter rolls up-to-date and prevents people from registering in multiple states. However, as NPR reported, others argue that "use it or lose it" policies unfairly suppress people's right to vote. Bustle reached out to Kemp for comment on the matter.

In one day in July 2017, half a million people (or 8 percent of Georgia's registered voters) were removed from the state's voter registry, as APM reported. Over 100,000 of these people were taken off the rolls not for standard reasons like relocation, but because they had opted not to participate in recent elections or make contact with election officials.

APM also pointed out that many Georgians were not aware they had been removed from the voter registry, something that could come as a surprise if they do decide to vote in the November midterms. Notably, though, Georgia is not the only state to employ the "use it or lose it" voter registration rule. In June, the U.S. Supreme Court upheld Ohio's "use it or lose it" rule, finding that the state could continue to remove inactive voters from its registry. While Georgia and Ohio's laws have received the most national attention, APM also found that seven other states have "use it or lose it" policies as well. These states include Alaska, Montana, Pennsylvania, South Dakota, Oklahoma, Oregon, and West Virginia.

In Georgia, the "use it or lose it" rule could potentially have significant implications for the state's governor's race. APM reported that, if the race between Kemp and Democrat Stacey Abrams is tight, the state's voting rule could affect its outcome. As the outlet explained, Abrams could become the first-ever African American governor in Georgia — and she has focused on reaching out to people of color to encourage voter turnout.

Glamour also reported that "use it or lose it" policies seem to inordinately affect Democratic and minority voters. Indeed, the magazine cited a 2016 Reuters study which revealed that impoverished African-American voters in Ohio were most significantly impacted by "use it or lose it" voter roll removals in the state. Moreover, the study also found that, in Ohio's three biggest counties, Democratic neighborhoods had voters removed from the registry at around twice the rate of Republican neighborhoods.

Overall, "use it or lose it" voter registration rules could certainly stand to have electoral implications in Georgia and beyond. Time will soon tell just how much of an impact these policies have had when the nation heads to the polls on Nov. 6.