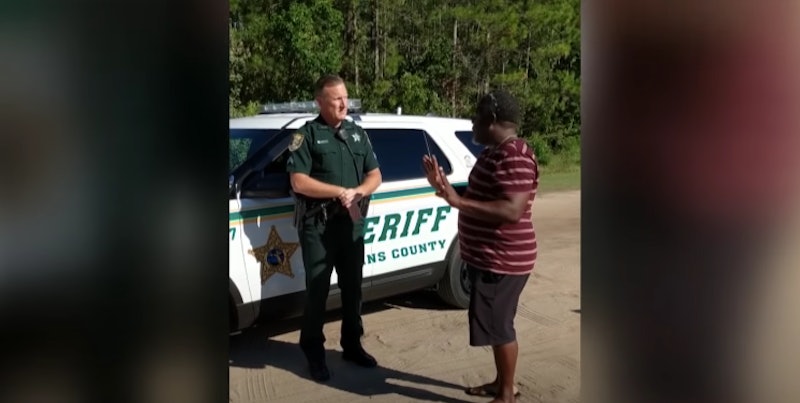 At a kid's soccer game in Florida over the weekend, a white woman called the police on a black father for giving instructions to his son during the game, First Coast News reports. It's only the latest case of a white person calling the police on a black person for doing something mundane and harmless, and Gerald Jones' response to "Golfcart Gail" calling law enforcement on him is heartbreaking.

"I'm working hard every day," Jones told ABC affiliate WJXX-TV, according to ABC News. "Do everything right. Love everybody. And my son, he's like, 'Hey, I just don't understand it.' I don't understand it. Something has to be done. What can be done? I don't know, but it's just too much."

Jones was watching his son's soccer game when, according to eyewitnesses, his son got frustrated at a call the referee made. From the sidelines, Jones shouted at his son to listen to the ref ("The ref is right, always," he later recalled saying). Shortly thereafter, a white woman — who is identified in local reports as a "field marshal" for the Ponte Vedra Athletics Association but has not been named publicly — approached him in a golf cart and, according to Jones, told him to not to speak to the ref. According to Ginger Williams, who recorded a video of the incident and wrote about it on Facebook, the woman told Jones that "harassment would not be tolerated."

When Jones noted that he was speaking to his son, not the ref, the woman told him to "go sit down," according to Maria Morales-Walther, another eyewitness who also published video of the incident. Williams says that when Jones attempted to explain, the woman told him, "I no longer feel safe due to your threatening behavior," and said she would call the police on him if he didn't leave. Jones began collecting his things and attempted to leave, but the woman called the police anyway.

The woman in question later told police that Jones "got nasty with me," according to video of the exchange. Morales-Walther says that the woman told deputies that she "feared for herself and the children because she didn't know what [Jones] was capable of." But Morales-Walther and Williams both dispute this characterization.

"At no point was he aggressive," said Morales-Walther, according to ABC affiliate First Coast News. Williams wrote on Facebook that Jones "was peacefully leaving his own son's soccer game to avoid exactly this situation."

The police did show up. Jones and the woman both gave their side of the story, and deputies left without incident. But Jones said that things could have been much worse.

"Anything could have escalated — me going to jail, my kid seeing me like that," Jones told WJXX-TV. He added that he "absolutely" thinks he deserves an apology.

However, Ponte Vedra Athletic Association President Gary Easom defended the unnamed woman, saying in a statement that she was acting out of concern for the children's safety.

"It was an unfortunate incident and I am sorry it happened, but our team acted appropriately to protect the children, consistent with our organizational mission," Easom said in a statement.

On Facebook, Williams said that the statement was made all the more egregious by the fact that earlier in the game, a white parent had been ejected from the game for being unruly, but the "field marshal" didn't approach them at all.

"What makes this even worse," Williams said, "is that a parent had actually been ejected from this game during the third period. There had to be a delay of game due to the disturbance, yet Golfcart Gail didn’t need to call the police on him. Why weren’t the police called? What was the difference? I’ll give you a guess."