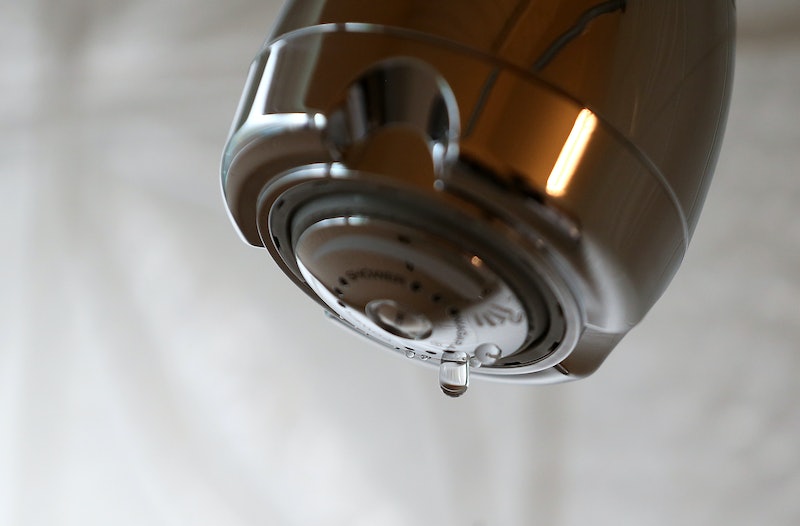 While it seems obvious that the whole point of taking a shower in the first place is to get clean, it turns out that your shower might be dirtier, and less clean, than you thought. According to a new study, germs in your shower head could cause lung disease. Published in the journal MBio, the study shows that a lung disease, called nontuberculous mycobacterial (NTM) lung disease, can be caused by breathing in the aerosols of a specific type of mycobacteria. And as gross as this sounds, the fact that these critters are lurking on your shower head as you unwittingly take your daily shower is even yuckier — because you definitely don’t need lurking, disease-causing germs raining down on your head everyday.

Newsweek reports that while most people can inhale mycobacteria without getting sick, if these germs attack the lungs, it can result in inflammation, NTM, or chronic lung problems. Symptoms include shortness of breath, coughing, fatigue, and weight loss, according to Newsweek. Antibiotic treatment can help, but in severe cases, they might be needed for up to 12 months in order to fully clear the infection out.

Newsweek writes that in the U.S. alone, over 80,000 people have NTM, with many people affected being older adults and people with compromised immune systems. The areas most affected by NTM-causing bacteria include southern California, Florida, Hawaii, and New York City, according to Newsweek. About NTM notes that folks come into contact with NTM bacteria regularly during daily life, and it’s usually not a cause for concern for most people.

Part of the problem with NTM-causing germs lies in the fact that they survive both heat and the chlorine added to municipal water in the disinfection process, Metro reports. University of Colorado at Boulder researcher and study co-author Matthew Gebert, told Metro that “Bacteria grow and persist in biofilms coating the inside of shower heads and shower hoses, despite the seemingly inhospitable conditions.” Gebert also said that these germs also seem to be able to tolerate “rapid temperature fluctuations, long intervals of stagnation, followed by turbulent flow events.”

So, basically, these little critters are tough, and aren’t so easily washed away. “In the act of showering, we are exposed to elevated concentrations of shower-head-associated bacteria as they are dislodged,” Gebert said. Yikes.

So, what to do to keep your shower head as free of bacteria as possible? Per Newsweek, researchers say that plastic shower heads are less prone to mycobacteria domination, as they tend to foster a wider range of non-harmful bacteria growth than metal ones do. If you can switch your metal shower head out, and opt for plastic one, that might help. Otherwise, just keep your shower head as clean as you can. A cleaning solution of equal parts white vinegar to water is effective, according to Good Housekeeping. Otherwise, you can just use your favorite commercial shower scrub.

While it can be helpful to be aware of the potential risks, there’s definitely no need to swap your showers for baths — NTM is a rare illness, according to the National Organization for Rare Disorders. Most microbes in your shower are totally harmless, and can be washed away with a good scrubbing.