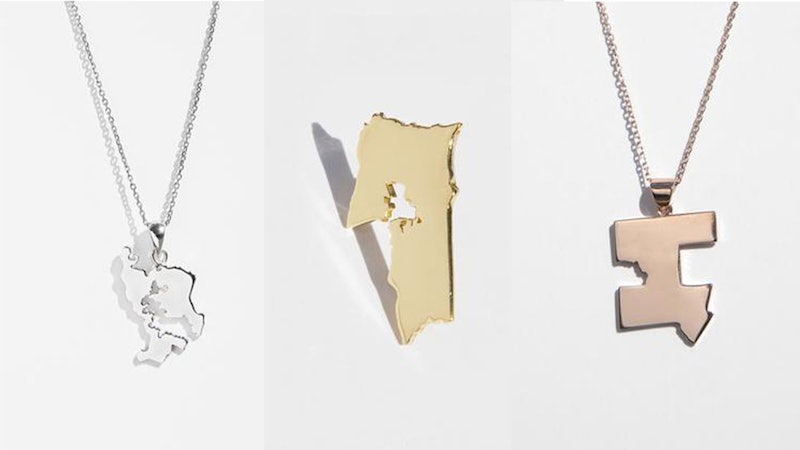 If you’re looking for a statement necklace that really makes a statement, look no further than Gerrymander Jewelry. It is, like its name suggests, jewelry shaped like the worst gerrymandered districts in the U.S. As the website states, anyone who looks at your oddly shaped jewelry won’t be able to help but say, “Wait…what?”

OMGWTF.VOTE, a non-profit supporting Democratic candidates in key Republican-controlled states, is to thank for the jewelry line shining a light on racially-based redistricting. “Forget circles, squares, or rectangles,” the website for the jewelry line states. “The modern district approaches a hectagon (a shape with 100 sides). With our one-of-a-kind pieces, we outline every border your state legislators or commissioners drew and your governor approved.”

For $195 (the proceeds of which go to support OMG WTF) you can purchase one of six Gerrymander Jewelry pieces in rose gold, white gold, or yellow gold. Each piece is 14K sterling silver plated, available as either a necklace pendant or pin, and, most importantly, features the effed up shape of some of the most gerrymandered districts in the country. Take the pendant modeled after Louisiana's sixth district, for example. “You’ve been missing this beautiful piece of jewelry in your life,” the product description states. “Just like LA-6 is purposely missing the African-American neighborhoods in Baton Rouge so that Republicans keep winning the district.”

You can even request your own district if you want to rep the gerrymandering going on right in your own backyard. Straight lines, as the Gerrymander Jewelry site states, are so 2011.

If you want to hear gerrymandering explained in a British accent, John Oliver did a thorough segment for Last Week Tonight on political redistricting last year. Essentially, gerrymandering is the act of redrawing districts to numerically favor one party over another. Though technically illegal, forms of legal gerrymandering still happens quite frequently, often affecting some of the most politically disenfranchised demographics. As Oliver asserts in his segment, politicians are “drawing voting districts in a way that creates unfair advantages for whoever happens to be drawing the line.”

“Gerrymander reminds you politicians have gone to amazing lengths to minimize your vote,” a parody ad for the jewelry company states. Communities with large populations of racial minorities and Democrats in Republican-controlled states are disproportionately affected by gerrymandering. Some analysts suggest this is why Republicans control a disproportionate number of districts in certain states.

For example, as Oliver points out, in 2014, 44 percent of voters chose Democratic candidates when voting for the House of Representatives. However, Republican candidates won in 13 of the 18 districts (about 72 percent).

Districts are redrawn every ten years with the next set of new lines being drawn in 2021. This means that the 2018 gubernatorial elections in states like Ohio, Michigan, and Florida are especially important as governors have the power to veto Congressional lines. Who you vote for in November could determine your district from 2022 until 2030.

As a whole, OMG WTF is working to keep citizens informed, energizing Democratic voters in Republican-controlled states. Like OMGWTF.VOTE states, government representatives at the state and local level “are the best way to stop Donald Trump and the Republicans.” They control things like overseeing the fairness in local elections and ensuring Congressional district don’t look like a mess of politically-motivated lines. With this jewelry line, OMG WTF is urging people to vote for governors who will veto these grossly shaped Congressional lines.

Whether you decide to sport Gerrymander Jewelry or just stay informed on how gerrymandering is affecting our elections, you can help ensure your representatives are actually working to represent you. As Gerrymander Jewelry states, “A diamond is forever, but a district lasts a decade.”