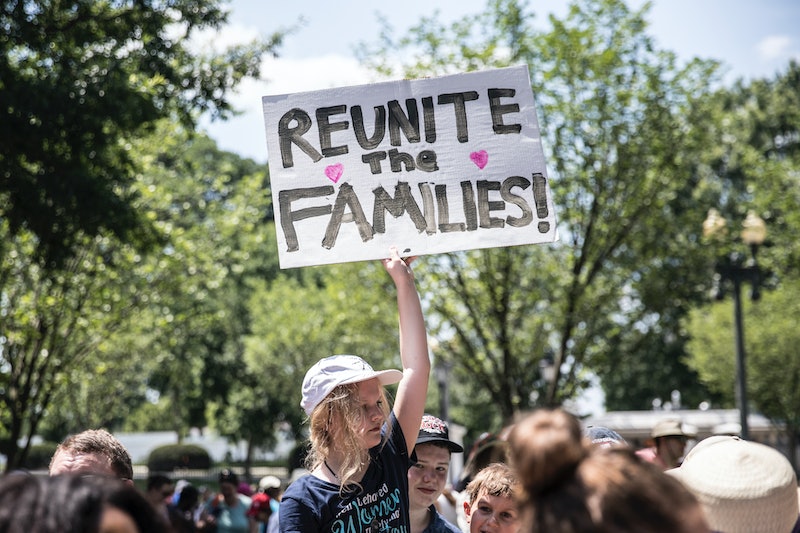 In the chaos following the end of the Trump administration's family separation policy, the difficulty that many parents are facing extends beyond just locating their children. The costs of getting a migrant child out of detention are steep, financially and otherwise.

As many parents remain in custody, having crossed the border illegally, the only way to get their children out of detention is to find a sponsor in the United States willing to take them in. According to The New York Times, sponsors must undergo an exhausting and complicated process in order to take in the children. This can include proving they are a blood relative of the child, providing proof of income or other financial documents, and complying with home visits.

Most alarming for many potential sponsors is a newly enacted requirement to submit fingerprints to Immigration and Customs Enforcement (ICE). The majority of sponsors, according to The Times, are themselves undocumented immigrants, and fear outing themselves by trying to rescue a child in detention.

A new memorandum of agreement, signed by the Department of Health and Human Services (HHS) allows ICE to collect fingerprints from any adult in the sponsor's household, with no guarantee that they won't be used for immigration enforcement. According to congressional testimony, this requirement seems to have resulted in lowered rates of sponsors coming forward to retrieve children from custody.

Finally, on top of all of this, the sponsor is required to pay for the transportation costs of the child and an escort to get from the detention center to the sponsor's location. For many sponsors, the costs are impossibly high, and pose a serious financial burden. One Salvadoran mother was charged $576.20 to cover airfare for her son and an escort traveling from Miami to Virginia, The Times reported. A Guatemalan immigrant living in New York had to borrow money to pay the $2,500 required to fly two teenage relatives from Texas. A construction worker in Los Angeles requested that his detained niece be put on a bus from Houston, but authorities refused, and with only a day's notice, he was forced to pay $1,800 for her airfare.

According to Newsweek, a Rhode Island couple, who had to submit proof of residency and income, as well as six letters of support from community members to ICE as part of their sponsorship application was then forced to pay for an expensive last minute flight for their sponsored child and an escort.

The rigorous sponsor verification process is a measure to prevent children from being released to human traffickers or unfit homes, according to the Office of Refugee Resettlement (ORR). According to The Times' report, the policy of having sponsors pay for transportation costs is not new, but the Obama administration tended to waive the costs to get children who showed up at the border alone out of detention more quickly.

In some cases, advocacy organizations are able to help mitigate costs for sponsors, and in more extreme instances in which sponsors are unable to meet the cost, lawyers will convince case workers to waive payment, The Times said.

Rep. Cheri Bustos and more than 100 of her Democratic colleagues in the House sent a letter to Department of Homeland Security secretary Kirstjen Nielsen and HHS secretary Alex Azar demanding a cost breakdown of the family separation, detention and reunification process, calling the situation a "misuse of taxpayer dollars". Some have pointed out that the government could reallocate money used to detain children to transport them to their sponsors, and even save money doing so.

"It’s counterintuitive to keep a child in care," Bob Carey, the former Obama administration head of ORR told The Times. "The human cost incurred aside, the financial cost for the government is significant. One day of care could cover transportation costs."