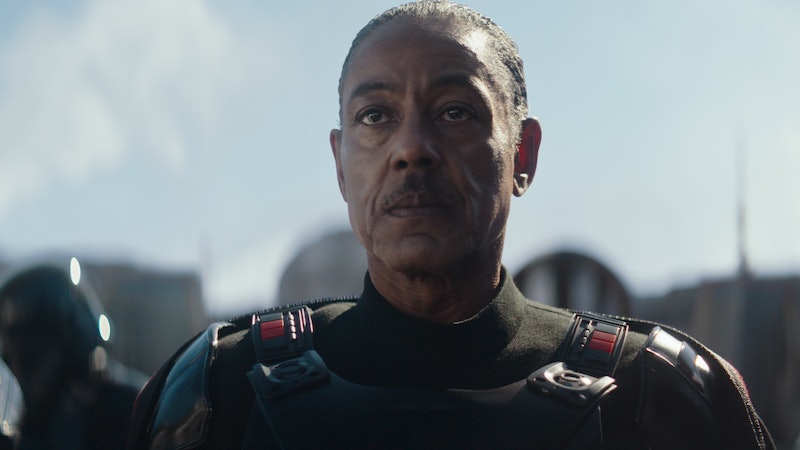 Baby Yoda may have taken the internet by storm using something much more powerful than the Force: adorableness. However, that bundle of cuteness isn't the only new character to make their debut into the Star Wars franchise. Giancarlo Esposito plays Moff Gideon on The Mandalorian, and while the character has yet to appear in any of the episodes thus far, he will apparently serve as a vital part of the Empire's future, for better or for worse.

According to Entertainment Weekly, Moff Gideon was a former governor under the Galactic Empire and saw his world turned upside down after the Rebels destroyed the Death Star. Now, years later, he's licking his wounds and figuring out where exactly he fits in this post-Empire world. “He’s an Imperial remnant of a very fine officer who then switches to become sort of the guardian of the people,” Esposito explained to EW during an interview. “But what does [Moff Gideon] really want? This guy is going to be a big player because he has an idea of how to keep order.”

Interesting choice of words, considering that series showrunner Jon Favreau teased to EW in a separate interview that The Mandalorian will explore the origins of the First Order. "What could happen in the 30 years between celebrating the defeat of the Empire and then the First Order?” Favreau teased. "You come in on Episode VII, [the First Order are] not just starting out. They’re pretty far along.” He later added: "“So somehow, things weren’t necessarily managed as well as they could have been if [the galaxy] ended up in hot water again like that."

Perhaps Esposito's Moff Gideon will come to be the brains behind the First Order's creation, making him an important figure to keep an eye on once he makes his grand debut — whenever that will be. The Mandalorian isn't even credited on the actor's IMDb page, making it all the more difficult to know when exactly to expect him on the show. But given that there are only eight episodes in the first season, fans shouldn't have to wait much longer.

For his part, though, Esposito couldn't be more thrilled to join the Star Wars universe, given that he himself is a big fan of the original film. "I really loved the original Star Wars movie, which had all this mystery and comedy," he told The New York Times in a recent interview. "As a young adult, I was empowered by this vast universe — it was the unknown, and the unknown can be very intriguing."

Now Esposito will get to be part of that intrigue and add his own influence to this fictional realm for all to see — even if you're from a galaxy far, far away.