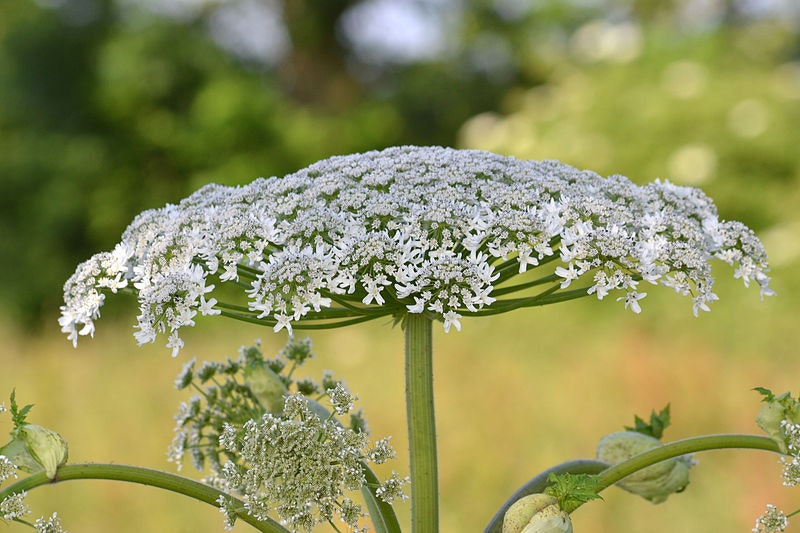 An enormous plant that can blind you and cause third degree burns might sound like something out of a creepy old horror movie, but the real-life risks are all too real. Giant hogweed is a highly toxic and dangerous invasive species that can cause major injuries, and knowing how to identify and avoid the weed is super important.

Hogweed pretty much looks like huge Queen Anne’s lace, which is a benign plant that produces delicate white flowers. Unlike Queen Anne’s lace, however, giant hogweed is an invasive and poisonous species of weed that can cause severe damage to your skin and eyes, according to CBS News. This dangerous plant is cropping up throughout the New York State and Virginia this summer, and according to the New York State Department of Environmental Conservation (DEC), hogweed is also found in Pennsylvania, Ohio, Maryland, Oregon, Washington, Michigan, Vermont, New Hampshire, and Maine.

The dangers of coming into contact with this plant are all too real. A Virginia teen was hospitalized with third degree burns after touching hogweed while landscaping, and has since been under the care of doctors at a local Virginia burn center, BuzzFeed News reports.

Recent high school graduate Alex Childress took a landscaping job this summer to save money for college. While familiar with clipping a variety of shrubs and trees throughout his hometown, this was the 17-year-old's first brush with the toxic hogweed plant, CNN reports. The teen told NBC affiliate WWBT that he was “working outside a factory and I snipped down a bush and it fell and touched my face.” Unaware that he’d been exposed to toxic hogweed, the teen wasn’t concerned at first. When severe burns began to appear on his face hours later, however, his mother, Chrissy Childress, a nurse at the Virginia Commonwealth University Medical Center, urged her son to seek medical care. Once admitted to the hospital’s burn unit, Childress was told to shower for an hour and a half, and since hogweed sap becomes more toxic when exposed to sunlight, Childress three days in an unlit room before being released from the hospital, CNN reports. The teen is now recovering at home, and his family has started a GoFundMe to help with medical expenses.

CBS further reports that giant hogweed is a member of the carrot family, and is considered a noxious weed by the federal government. Indigenous to the Caucasus Mountains, hogweed made its way to the U.S. in the early 20th century via seed-carrying waterways and birds. Growing up to 14 feet tall, giant hogweed has huge, thick leaves that can grow up to five feet wide, while the stems are green with white hairs and pronounced purple blotches. Giant hogweed produces a toxic sap which can cause burns, scarring, and even permanent blindness when exposed to sunlight. According to BuzzFeed News, a skin reaction can show up as soon as fifteen minutes after contact with hogweed, and it takes about 48 hours for blistering to form. BuzzFeed further notes that it can take weeks for skin to heal from hogweed exposure, and burns can last anywhere from weeks to years. If you happen to spot giant hogweed, you can report an invasive species sighting here.

Remember that while giant hogweed exposure is dangerous for humans, you’ll also want to make sure to protect your animals and pets. You can check out some tips for protecting your dog from hogweed poisoning here. If you or your pets do come into contact with giant hogweed, immediately rinse the affected areas with cold water, get out of the sun, and seek medical attention ASAP. If the sap comes into contact with your eyes, rinse with cold water, put on sunglasses and avoid sunlight, and check in with your doctor on the double.