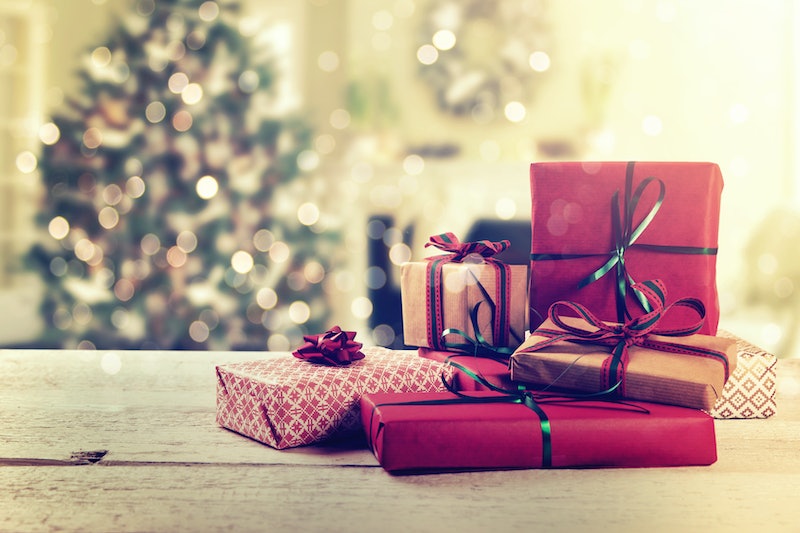 Have you ever received something like a toothbrush as a holiday gift and wondered, is this person trying to tell me something? File this under things that make you go hmm because passive-aggressive gifting is real. Apparently, the holidays are the most passive aggressive time of the year, according to a new survey commissioned by Groupon. Two-thousand people were asked about gift-giving trends during the holiday season, and they discovered that 22 percent of people reported receiving a gift they felt carried a hidden meaning — and they were not happy about it.

If most of the passive-aggressive holiday gifts you've received came from your mom, you're not alone. Mothers topped the list as the most passive-aggressive gift givers. Perhaps because your mom would rather send you a message that you need your secret-decoder ring to understand instead of telling you straight out that they can't stand your hairstyle/clothes/eating habits.

According to Groupon, some of the most passive aggressive — and unwanted — gifts included self-help books, wrinkle cream (OK, I actually asked my mom for this because that sh*t is wicked expensive), and fruitcake, which I actually received once and threw lovingly at a friend's car during a New Year's road trip to Florida. Because, has anyone ever actually eaten a fruitcake? Aren't they just recycled year after year and good long after the apocalypse like Twinkies?

You Shouldn't Have, Seriously

The study also noted that men are 67 percent more likely to receive a passive-aggressive gift from their mother than women, and they are three times more likely than women to throw out a ‘bad’ gift within 48 hours of receiving it. Like, hey mom, thanks for that flip book of professional men's hairstyles, but I'm still not getting rid of my man bun. However, if someone is determined to send a message, well-meaning or otherwise, there is probably little you can do to stop them.

Miscommunication, or total lack of communication, causes the most problems in relationships, according to Our Everyday Life. Clearly, the holidays are an obvious time to miscommunicate with a loved when they are already feeling extra stressed and vulnerable. That always goes over well, said no one ever.

"Top hidden meanings of gifts included becoming more productive or organized, making diet improvements, increasing number of trips to the gym, learning how to cook, and spicing up sex life," Groupon reported. I'm no expert, but I mean seriously, if you want your partner to be more adventurous in the bedroom (spouses trailed mothers only slightly as the most passive aggressive gift givers), it's probably better to talk to them about it instead of having them open a tantric sex book in front of everyone on Christmas Eve.

No one knows how to throw a dagger in like a family member, and the Independent reported that passive-aggressive gifting is extremely common among families. "My sister was overseas for Christmas, but thoughtfully left me the gift of Trinny and Susannah's How to Dress for your Body Type book," the newspaper quoted one reddit user as saying "I re-gifted it to her the next year. And back and forth we go."

The Independent spoke with relationship counselor Denise Knowles about the dangers of engaging in this kind of mean-spirited behavior. "[B]ear in mind that gifts can be quite a blunt instrument," she told the Independent. "There are generally better ways to communicate uncomfortable and difficult conversations than giving passive aggressive gifts. Some conversations are more difficult to have than others because if we love or care about somebody we don’t want to hurt them, but if we say nothing our feelings of disgust, hurt or anger can turn into resentment."

While you might think that giving your brother a dictionary is a subtle way of telling him he's dumb, passive-aggressive gifts can cut pretty deep, especially if the thing you're failing to communicate with words is meant to disparage someone's intelligence, body type, mental health, lifestyle choices, etc. For example, one Reddit user revealed, "I had a friend who was 5 months pregnant and was not married; her aunt gave her a book that was basically about how she was going to hell. Keep in min[d] my friend had a serious boyfriend of [seven] years, they just didn't want to get married; people do that now they call each other life partners."

Personally, instead of a gift riddled with hidden meaning, I'd rather receive nothing at all. Because, I don't need anymore stuff. And, I especially don't need stuff coated in bad mojo.

More like this
13 Summer Solstice Quotes To Celebrate The Longest Day Of The Year
By Sadie Trombetta
23 Personalized Father's Day Gifts Your Dad Will Actually Like
By Brittany Bennett
18 Father's Day Poems That'll Make You & Your Dad Tear Up
By Michelle Regalado and Siena Gagliano
The Summer Solstice Spiritual Meaning, Explained
By Jessica Booth and Brittany Beringer
Get Even More From Bustle — Sign Up For The Newsletter