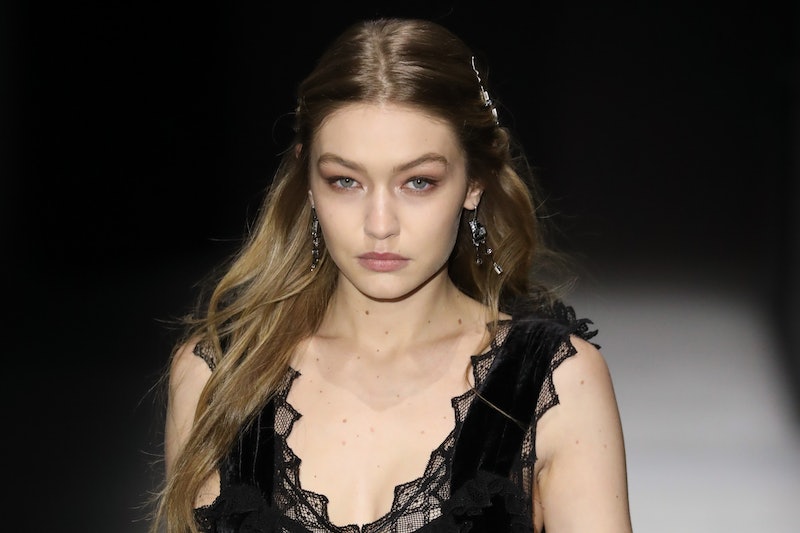 You would think that in 2018 we would be past the odd need to tell women that their bodies look wrong — and that includes models. With body positivity movements gaining traction, calls for less Photoshop in ad campaigns, and body diversity pushes in fashion, you would think that many would think twice before critiquing a woman's body.

But Gigi Hadid was body shamed after NYFW, being called "too skinny" on social media after she walked down some of the biggest runways in the industry. Not willing to ignore the comments, Hadid went on Twitter to address it. In her tweet, she explained why her body has fluctuated in size over the last couple of years, and also pointed out the hypocrisy of this new concern, seeing how many people thought she was "too big" to walk the runway just a few years back. Her body has changed, she explained, because she was diagnosed with Hashimoto's disease five years back.

"For those of you so determined to come up w why my body has changed over the years, you may not know that when I started @ 17 I was not yet diagnosed w/Hashimoto’s disease; those of u who called me 'too big for the industry' were seeing inflammation & water retention due to that," her tweet said.

Hashimoto's disease is a condition where your immune system attacks your thyroid, which is a small gland that produces hormones that organize many of your body's functions. Since your thyroid isn't able to work properly, it can lead to a slew of different symptoms, everything from stiff joints to unexplained weight gain to memory lapses.

In her next tweet, Hadid explained in great detail how hard it has been over the years trying to manage her symptoms and finding a way to live with her diagnosis.

After sharing her personal medical journey, Hadid then explained that she hadn't been starving herself as some have suggested, but that her body has been processing food differently since it has now working more properly. Hadid also pointed out the fact that it was inappropriate that strangers felt that they had the authority to look at her body and decide whether or not it looked OK based on their own standards, and she should not have been put into the position to share such deeply personal information just because people she did not know decided to get up in arms over her body.

The fashion industry has made strides over the years to regulate weight minimums in an effort to curb the industry’s promotion of extreme thinness. Seeing how models were forced to lose alarming amounts of weight in order to book jobs, this was seen as a plus.

In France, models need a doctor's note affirming that they're not under weight in order to walk the runway, and Denmark mandates annual check ups for models to make sure that they're healthy. But in the US, no such similar legislation has passed. Instead, designers are using "healthier" models thanks to public pressure and demand — and some naturally thin models have reported seeing a backlash to this. For example, one model shared that ASOS allegedly told her to gain weight because their customers responded better to curvier models, shaming her lithe frame and making her lose out on work.

In the end, having your body scrutinized and be called "too skinny" is still a form of body shaming, even if it doesn't come with the social stigma and discrimination plus size people experience. The point of the body positivity movement is to stop scrutinizing bodies — period.

And remember: No one needs to explain their body to you. Not even a supermodel.