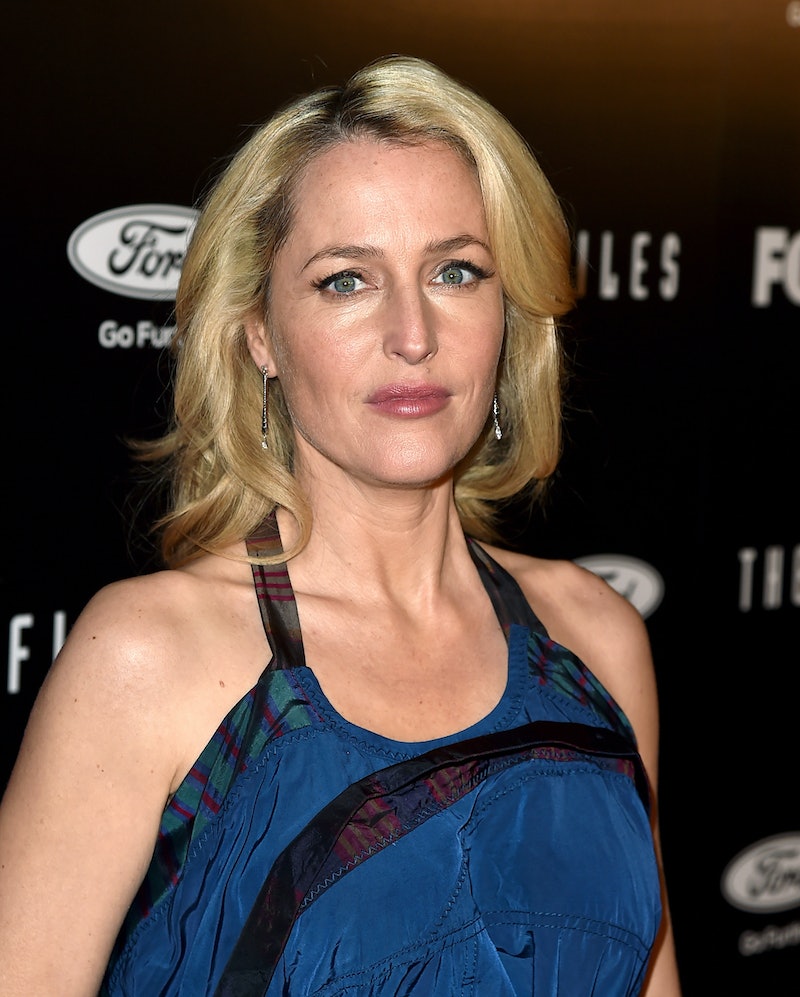 Margaret Thatcher, the controversial former prime minister of the United Kingdom, was an inevitable addition to The Crown, but Netflix just made her anticipated appearance way more exiting. As reported by Deadline, Gillian Anderson will join The Crown as Margaret Thatcher for Season 4. Since Season 3 has yet to premiere, fans will likely have to wait more than a year to see The X-Files actor on the show. According to The Sunday Times, Anderson will join filming over the summer as she prepares to take on the Iron Lady.

Thatcher will be an interesting role for the star. During the 11 years she served as Prime Minister, Thatcher had a notoriously sour relationship with Queen Elizabeth. The women held weekly meetings, but not much is known about what occurred during these sit downs, according to The Guardian. It will be exciting to see how The Crown writer Peter Morgan portrays the contentious relationship — and even more exciting to see Anderson and the reigning Queen Elizabeth actor, Olivia Colman, go toe-to-toe in scenes.

The Crown will air its third season later this year, and it's set to jump forward in time — which means a new cast is set to take over the royal roles. Colman will replace Claire Foy as Queen Elizabeth, and Tobias Menzies will step in as Prince Philip in Matt Smith's place, as per Deadline. The third season will begin in 1963, and will encompass more contemporary events such as the rise of The Beatles and England winning the World Cup. There are a few other significant castings as well: Helena Bonham Carter will play Princess Margaret, and Ben Daniels will play her husband, Antony Armstrong-Jones, the 1st Earl of Snowdon.

Fans can expect Anderson's season to take place in the '70s, since Thatcher was Britain's first female Prime Minister from 1979 to 1990. However, Netflix has yet to confirm any details about Season 4.

Even though it's only January, 2019 is shaping up to be a major year for Anderson's career. Earlier this month, Anderson appeared as a sex therapist and overly attentive single mom in the hit Netflix series Sex Education. The show follows Otis, a 16-year old navigating the complicated world of teen sexuality, who starts a business offering therapy to his equally confused peers. The comic role of Jean Milburn, Otis' mother, is a pretty big departure from Anderson's iconic role as Dana Scully on The X-Files, but she completely owns the part.

In a recent interview with Vanity Fair, Anderson discussed the joy of dabbling in comedy. "I've always played such serious characters before," she said. "I've never had an experience like that where I've gotten to just let it all hang out, so that in and of itself was such a pleasure."

It will be exciting for fans to see Anderson and Colman act opposite each other on The Crown. Colman is also having a major year in her career. The actor's breakout role was on the BBC drama Broadchurch, but she's just beginning to gain recognition in the United States. In early January, Colman won the Golden Globe for Best Actress for her role as Queen Anne in The Favourite. The two actors seem likely to have great chemistry on The Crown, and it's difficult to think of anyone better to portray the strained political relationship between Thatcher and Queen Elizabeth than these two TV legends.