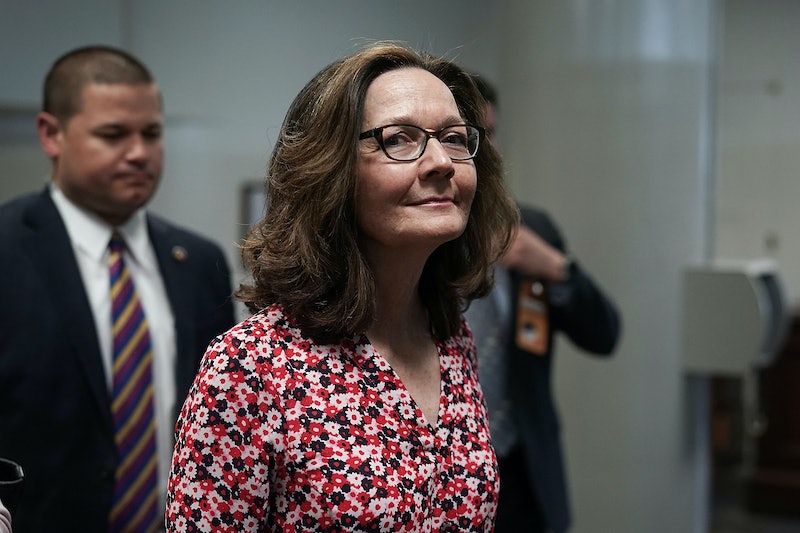 If career clandestine officer Gina Haspel can clear a Senate confirmation hearing process that begins Wednesday, she will become the first-ever woman to lead the Central Intelligence Agency. But while President Trump and his administration officials were quick to point out that Haspel's confirmation would be a historic feminist achievement, Press Secretary Sarah Huckabee Sanders went a step further and accused Haspel's critics of hypocrisy for claiming to be supportive of women, yet opposing the CIA director nominee.

"Any Democrat who claims to support women’s empowerment and our national security but opposes her nomination is a total hypocrite," Sanders wrote on Twitter Saturday. The comment revived a debate over what it means to be a feminist, and whether the Trump administration was weaponizing the term in order to pressure votes in Haspel's favor.

"It's more complicated than 'feminists have to vote for all women,'" Laura Beth Nielsen, Research Professor at the American Bar Foundation and Professor of Sociology at Northwestern University tells Bustle. "That kind of unthinking feminism is knee-jerk and reactionary and designed to sort of bully people."

Haspel has drawn particular criticism for her involvement in the enhanced interrogation and torture of suspected terrorists in the wake of 9/11. That issue is expected to take center state during Wednesday's confirmation hearing before the Senate Intelligence Committee, along with Haspel's involvement in the destruction of video tapes that showed suspects being tortured.

"Women's empowerment has never meant that being a woman sanitizes that person's beliefs, values, actions, or ideas, and to insist that is a crude and counterproductive version of feminism," Naomi Mezey, Professor of Law and co-director of the Gender+Justice Initiative at Georgetown University, tells Bustle. "It's offensive to the complexity of people."

Haspel's confirmation in the Senate rests on a very thin Republican majority, with just 51 Republicans in the chamber, compared to 49 Democrats. The vote could likely come down to a slimmer margin: Sen. John McCain, R-Ariz., is undergoing medical treatment in his home state and may be unavailable to vote (and is himself a former prisoner of war who has spoken out against torture), and Sen. Rand Paul, R-Ky., has said he will not support Haspel. No Democrats have said they'll support her.

"She's a nominee of Trump, and his judgment has been shown to be so poor that it would make me question any nominee he puts forth," Mezey says. "That's politics, but that has nothing to do with whether she's a woman."

In interviews with Bustle, gender studies experts pointed out that in many ways, torture is a clear feminist issue. They described violence against women and the torture of political enemies both as efforts to deprive people of their dignity.

"Both include attempts to strip a person of their humanity through confinement, threats, and violence, or ultimately, murder," says Ara Wilson, Associate Professor of Gender, Sexuality & Feminist Studies at Duke University. "Feminists are not interested in promoting someone who tortured because she is a woman."

Drawing on her record of more than three decades in the CIA, Nielsen calls Haspel "someone who's demonstrated profoundly bad judgment in the field they're proposed to lead," and points out that torture proved ineffective in the Global War on Terror. From the U.S. Senate Select Committee on Intelligence's report on the CIA released last fall:

The use of the CIA's enhanced interrogation techniques was not an effective means of obtaining accurate information or gaining detainee cooperation.

"There are a lot of people that think that the kind of violence that was perpetrated in the enhanced interrogation that the CIA conducted with her participation is antithetical to a vision of a feminist worldview, because it's torture," Nielsen says. "And feminism isn't just about supporting women. It's about supporting policies and practices that promote equality and humanity in the world."

Experts highlighted feminism's roots in recognizing women's historical place as lower-status individuals, and said the movement extends toward recognizing the subordinated status of people who have endured torture. Others pointed out that on a widespread level, more work needs to be done to elevate the representation of women in government, and especially in the higher ranks.

"Between really qualified candidates, yes, we do need women to have more access to power," Mezey says, "but it doesn't mean we ignore the things they stand for and the ideas they have."

Haspel's ideas and her record will be on full display Wednesday. Whether she can gain lawmakers' support will be entirely up to her.