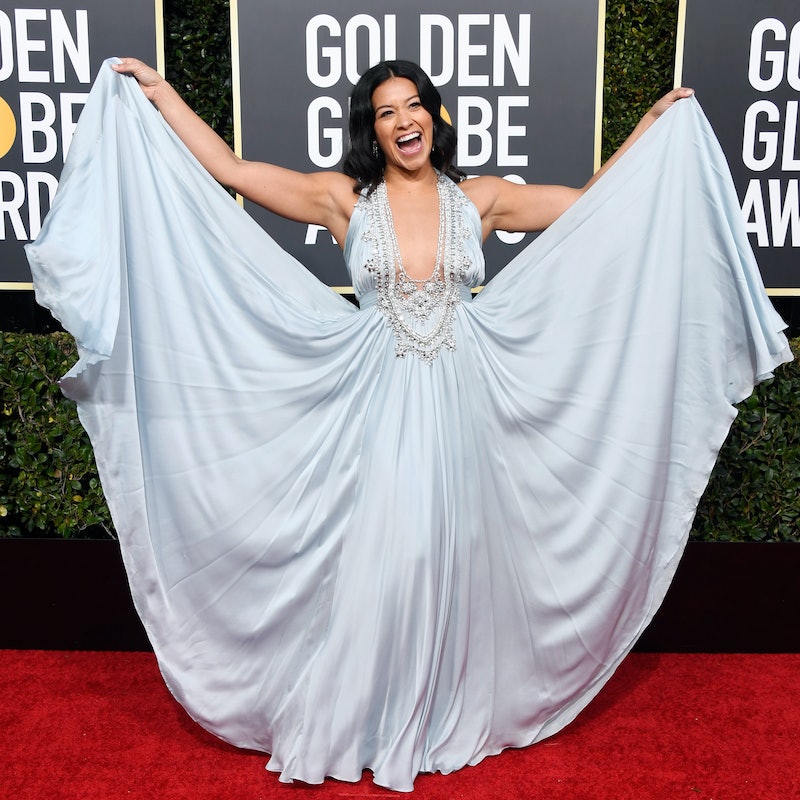 On Wednesday evening, CW fans everywhere rejoiced: in an Instagram post, actress Gina Rodriguez confirmed a Jane the Virgin spinoff is happening, and she even gave a few spoilers away in the process. In the photo, Rodriguez was standing next to actor Elias Janssen, who plays her five-year-old son Mateo on Jane the Virgin — and she was also sporting a pretty substantial baby bump. Needless to say, the photo might have fans wondering what in the world the spinoff is going to hold.

Rodriguez wrote in her caption, "We got good news from the CW! Jane will be birthing a SPIN OFF!!!!! Jane The Novelas!!!"

As E! News reports, the spinoff comes on the heels of the announcement that Jane the Virgin would be ending after its fifth season. What's more, the network notes that Rodriguez's caption hints that a particular plot line on Jane the Virgin might just be carried into central focus in the spinoff.

The new show will be a "telenovela anthology series in the tradition of JANE THE VIRGIN, where each season is based on a different fictional novel 'written by' Jane Villanueva and narrated by the author herself," a CW spokesperson told Bustle via email. "The first installment takes place at a Napa Valley Vineyard, where family secrets (and family members) don't stay buried for long."

The CW further confirmed that Rodriguez will be one of the executive producers on the show, though it's not clear if she will physically appear at any point on the spinoff series. The news comes alongside the announcement that hit TV show Riverdale also has a spinoff series in the works.

Per TV Guide, the Riverdale spinoff series is titled Katy Keene, and the plot follows future fashion legend Katy Keene and her friends as they try to make it in New York City in their early twenties. Along these spinoff announcements were the news that the CW has finally handed out pilot orders for two shows that have been in development for several years: a Nancy Drew-related series and a television reimagining of The Lost Boys, per TV Guide.

Rodriguez's happy announcement about the Jane the Virgin spinoff came less than a day after she offered up another stunning revelation: she met her fiancé, Joe LoCicero, while he was playing the role of a male stripper on Jane the Virgin.

To late night host Jimmy Kimmel, Rodriguez said, "He came on as a stripper that my mother hired for my bachelorette party. Jane is, like, super against it and super terrified and just, like, doesn't know what to do with all that. But Gina does."

She continued, "He's like a walking Photoshop. Like, perfection. It's so terrifying," she said. "I think I was, like, drooling and trying to remember my lines at that moment."

Since they started dating, Rodriguez has posted several pictures of herself with her fiancé. In one birthday post, Rodriguez wrote, "To my king. I love you. Happy birthday. #sexiestmanAlive"

Rodriguez has not yet confirmed what she will be doing after season five of Jane the Virgin wraps, but it's safe to say fans are hoping she'll be heavily involved in the spinoff series.