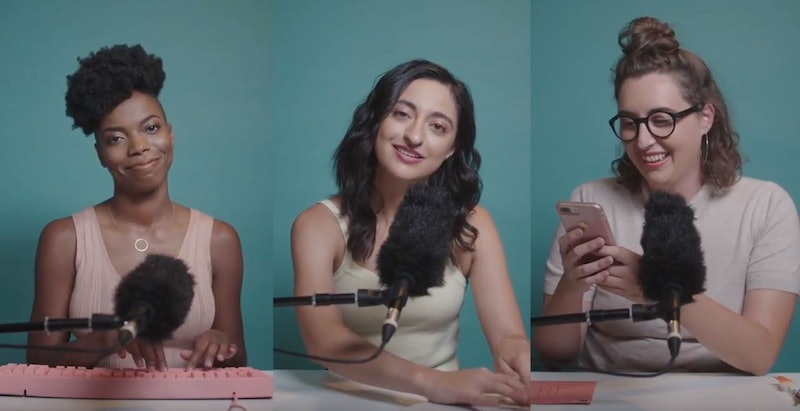 Taking to the streets and marching isn’t the only way to be an activist. Sometimes activism is much quieter. Like, whisper-quiet. Take it from the Girls Who Code's ASMR activism series, which can help you be calm while you fight the powers that be, Teen Vogue reports. ASMR Activism is the third set in the organization’s Sisterhood series, a visual album dedicated to celebrating young women who are driving transformative movements around the world.

According to Teen Vogue, “ASMR Activism” features familiar faces like Sasheer Zamata, Aparna Nancherla, Mitra Jouhari, and Caitlin Kimball, who perform typical ASMR sounds such as crinkling paper, playing with Silly Putty, and typing on keyboards. During this whole relaxing ASMR experience, viewers learn how to be active in their communities, like how to register to vote, find a town hall, or make protest signs, Teen Vogue reports.

"Girls, women, and ladies make up 51 percent of the population, but it’s archaic white dudes (and their lame foot soldiers) deciding what happens to our bodies, futures, and environment," Caitlin told Teen Vogue about participating in the video. "They are doing a sh*t job. Meanwhile, women are using their vast creativity, brains, empathy, and strength in activism to fight for justice, equality, and social change. Girls Who Code rules, and I’m hyped they included me to encourage women to vote, protest, and harness their power through activism — let’s rage."

But sometimes rage can be overwhelming and exhausting, especially in today’s political climate. That’s what makes Girls Who Code’s ASMR Activism videos so darn brilliant. If you’re not familiar with ASMR, if stands for “autonomous sensory meridian response,” which is this tingling sensation people feel in the back of their heads and in their spines in the response to various everyday sounds or stimuli, The New Yorker reports. Some of these stimuli, says The New Yorker, could be voices whispering, clothing rustling, fingers tapping, pencils scribbling, pages turning, or plastic crinkling.

It looks like Girls Who Code are onto something with their ASMR Activism videos. Not only are they teaching people how to get involved, but they’re keeping people relaxed and in the zone while they’re doing it.

"Spreading civic and political awareness feels more important now than ever, but truly, there's never a bad time," Aparna told Teen Vogue. "It's never too late or early to be informed about how to be an activist and engaged in issues that affect you and your community on both micro and macro levels. Throw some old-school phone dialing noises on top of that, and you're golden."

More like this
How To Fight For Reproductive Rights, Based On How Much Time You Have
By Courtney Young
8 TikTok Pasta Recipes To Try Out At Home
By Emma Garza
TikTok’s “5-9 Routine” Trend Is Here To Boost Your Productivity
By Courtney Young
What Is "The Ick?" The TikTok Dating Term, Explained
By Courtney Young
Get Even More From Bustle — Sign Up For The Newsletter