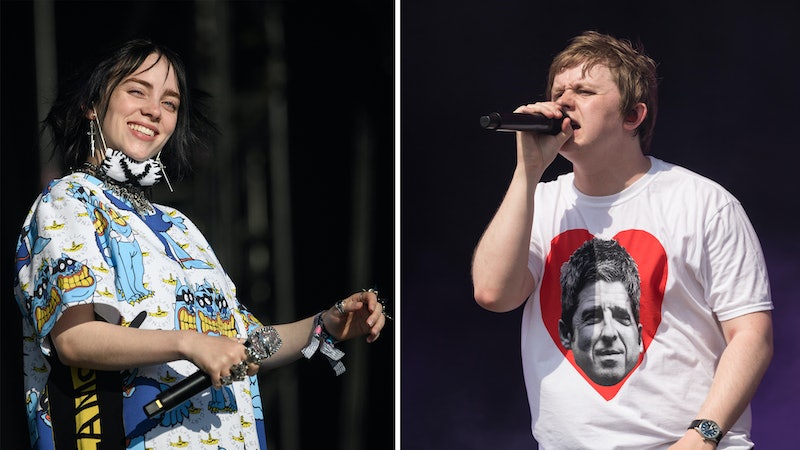 If you regularly buy new clothes, here's a couple of statistics you may have missed. Every single week, 11 million pieces of clothing find a new home on a landfill site. And in the UK alone, the amount of clothes sent to landfill every year weigh as much as the Eiffel Tower. Both of these nuggets of information come from the charity Oxfam. But the organisation has found a way to combat those figures, and it involves asking Glastonbury performers to donate their festival outfits.

The theme of the 2019 festival was climate change. As well as banning single-use plastic bottles for the entire long weekend, the festival also saw the launch of Oxfam's Second Hand September campaign which is asking people to pledge to stop buying new clothes for one month. To help get in the spirit of things, the charity is giving people the chance to own some mega musical memorabilia.

Numerous celebrities including Kylie Minogue, Billie Eilish, Sheryl Crow, Lewis Capaldi, and Robert Smith have gifted one of their festival must-haves. Each design will be available to buy or win online via Oxfam's site until September.

The full list is yet to be announced but current items include a sun visor from Minogue, Frank Turner's signed black tie, a sequinned top courtesy of KT Tunstall, a pair of wellies from The Lumineers, and a T-shirt reading: "Fcuk Boris" from Loyle Carner.

The Cure frontman donated a shirt he first wore back in 1989. (Its most recent outing was at a Sydney Opera House gig earlier this year.) Singer Gabrielle Aplin gave away her "fabulous gold sparkly jumpsuit." In a statement, she said: "I want someone else to feel as good in it as I did. I love the idea of my outfit being sold by Oxfam to help people who don’t have the basics in life. And I believe passionately in sustainability. Chucking perfectly good clothes in landfill really has to stop."

Oxfam will use all of the profits from the celebrity donations and its standard secondhand clothing sales for various charitable endeavours. Those living in refugee camps and those who are facing poverty and inequality across the world are just some of the people who will be helped.

"It’s in everyone’s power to change things," Oxfam's sustainable fashion expert, Fee Gilfeather, said in a statement. "By signing up to Second Hand September and pledging to say no to new clothing for one month, you can help protect the environment and, if you buy secondhand in Oxfam, you’ll be helping the poorest people around the world escape poverty."

The charity currently uses a state-of-the-art recycling centre to ensure that as little as possible goes to waste. More than 12,000 tonnes of clothing is diverted from landfill every year using this strategy, weighing as much as the Eiffel Tower.

The full list of celebrity donations is as follows:

And if your favourite Glastonbury act isn't named, keep an eye out as there is reportedly more on the way from the likes of The Chemical Brothers, Fatboy Slim, and George Ezra.