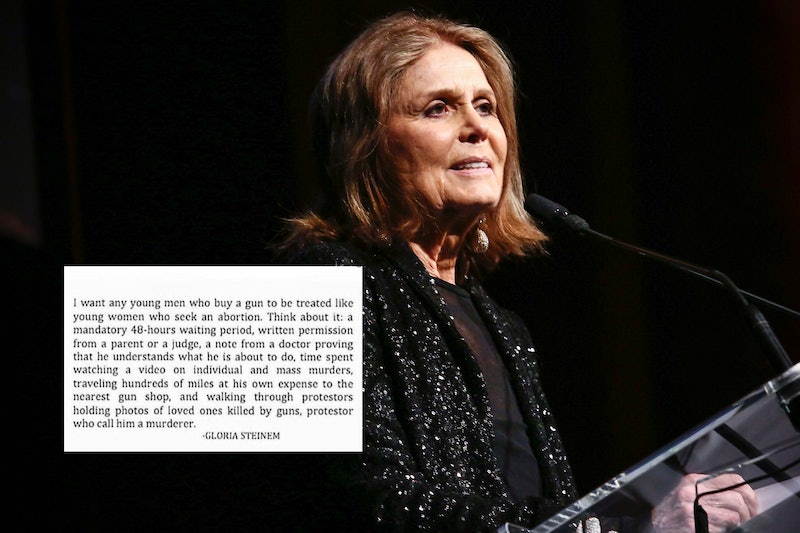 After a gunman murdered 59 people and wounded more than 500 others at a country music festival in Las Vegas, Americans lurched into the familiar cycle of shock, mourning, and calls to action. Social media latched on to a viral "Gloria Steinem" quote on abortion and guns that asks Americans to think about what would happen if the process of buying a gun looked more like the process of getting an abortion. Celebrities posted the meme, attributed to the iconic feminist leader, on their Instagram feeds and Twitter accounts.

But Bustle has learned that the famous passage, which rails on people who fight for stricter abortion laws but rally against any regulation of guns, was actually the brainchild of two men.

"I thought it was a really, really clever way to show the hypocrisy between the different positions," says Brian Murtagh, the 52-year-old Navy veteran who wrote the meme in 2015. "They can throw all kinds of ridiculous obstacles in the way of a woman getting a needed and legal procedure and they see nothing wrong with that, but you try to put the smallest and most reasonable limitations upon carrying a gun, and this is just impossible."

"I think the view many Americans have is massively distorted by the continual propaganda of the people who make money selling guns."

The argument points out that the regulations imposed on abortion providers — including requirements that procedure rooms be a specific size, that abortion facilities be no more than a set distance from a hospital, and that providers have admitting privileges at a nearby hospital — has resulted in reduced access for women seeking abortions.

During the fight to repeal The Affordable Care Act, Republicans sought to enact tax subsidies tied to a prohibition on abortion coverage. Just this week, the U.S. House of Representatives passed a bill that would ban abortions after 20 weeks under threat of a fine or up to five years in prison for the provider.

Yet House Republicans have shown no interest in taking up any legislation pertaining to gun rights since the Sunday night shooting, suggesting little can be done to prevent gun violence.

"A woman having an abortion doesn't usually kill a room full of people in minutes," Murtagh says. "Let's get our priorities straight."

Gloria Steinem shared the quote in December 2015 and didn't take credit for it, but the internet didn't listen. When she thanked "whoever gave us all this present" of prose, Murtagh — a hobby writer with more than one viral post to his name — never quite rose to prominence.

Murtagh posted the meme to his Facebook page in 2015, as a reflection on an article written by his acquaintance William Hamby in February 2013 (Bustle has reached out to Hamby but not received a response). Hamby's article, "What If Gun Laws Were Like Abortion Laws?", was published on Examiner.com and has since been taken down — however, the full article is still available thanks to the WayBackMachine.

"Why can't we treat them like we do cars?" Murtagh says, spinning another analogy, continuing:

Why can't you have to go through a brief training course to show you can operate the thing safely? Why can't you register a particular gun just like you register your car to you? Why aren't you required to take out insurance in case something goes wrong and you're in an accident or whatever? You accidentally shoot somebody?

[I]f you have the privilege of carrying a lethal weapon around with you, then if you misuse it, if you use it while under the influence of drugs or alcohol, if you use it in the commission of crime, it should be taken away from you.

In fewer than 200 words, Murtagh's post excoriates gun rights advocates who fight to limit a woman's access to abortion — two pillars of the conservative right.

Let's close down all but one gun shop in every state and make him travel hundreds of miles, take time off work, and stay overnight in a strange town to get a gun. Make him walk through a gauntlet of people holding photos of loved ones who were shot to death, people who call him a murderer and beg him not to buy a gun.

"It really showed off the hypocrisy of, basically the same people to say it's a complete impossibility to do anything about guns because buying a gun, that's a right, as opposed to the right to have an abortion or reproductive access rights," Murtagh says.

A veteran of the Navy, Murtagh learned to handle a pistol and shotgun — but he doesn't want to own one today. He suffers from periodic bouts of depression and can't ignore the sky-high rate of suicides committed by guns, which outpaces any other method "because it's just so easy."

"I should not be going out to where little kids wait for their bus and see shell cases on the ground."

Murtagh celebrated his 21st birthday in boot camp, a decision he made for the opportunity to leave home in England and relocate to the U.S. His father was in the Air Force and Murtagh has dual citizenship of the U.S. and Ireland. In the country he's continued to call home, the number of gun deaths outpaces every other developed nation, giving Murtagh the perspective of both an outsider and insider to this unique scale of tragedy.

I think it gives me a normal, sane view. I think the view many Americans have is massively distorted by the continual propaganda of the people who make money selling guns.

Last year, the apartment complex where Murtagh lives was rocked by a "running gun battle" when a man engaged the police in a shootout. He saw bullet shells laying near the spot where a school bus stops to pick up the neighborhood kids.

"This kind of thing should not be happening. I should not be going out to where little kids wait for their bus and see shell cases on the ground," Murtagh says. "It's madness."

Sunday night's shooting at an outdoor country music festival on the Las Vegas strip is the deadliest in modern American history, and the 273rd mass shooting since January, according to the nonprofit Gun Violence Archive. That averages nearly one per day this calendar year.

Murtagh's goal is to use his words to cut through the "numbness" that's engulfed Americans after years of ever-deadlier mass shootings. As for his and Hamby's thoughts becoming a piece of Steinem's legacy, Murtagh has no hard feelings, and only wishes he had put Hamby's name at the bottom of the viral post.

I just figure, whenever I meme things … I don't mind if it doesn't get attributed to me. I put it out there, I figure its like releasing an idea into the wild. You hope that it will survive and do well.

More like this
Beyoncé & Madonna’s “Break My Soul” Remix Honors A Group Of Black Icons
By Stephanie Topacio Long
A Political Thriller Inspired By The Munich Massacre Is Coming Soon
By Darshita Goyal
Why Eurovision 2023's Host City Won’t Be Revealed For A While Yet
By Sam Ramsden and Rachel Mantock
Are John Legend & Kanye West Still Friends? The Singer’s Latest Update Is Candid
By Brad Witter
Get Even More From Bustle — Sign Up For The Newsletter