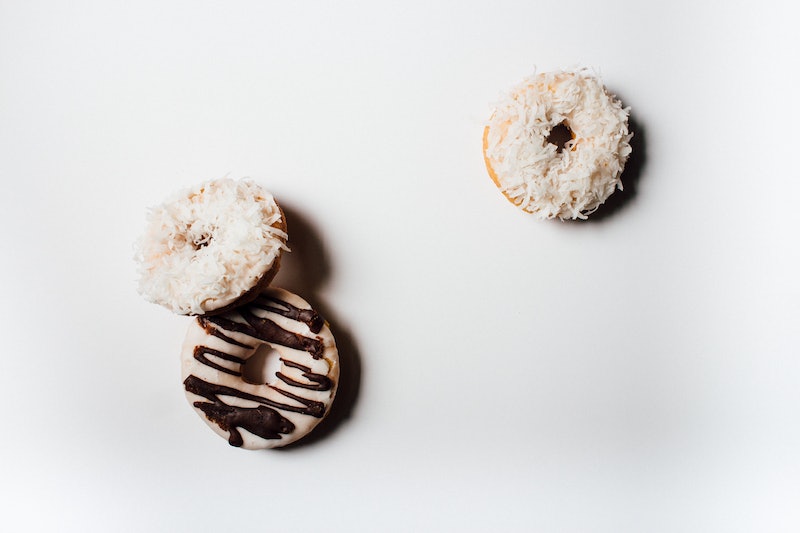 Are you sick of being unable to see your doughnuts every time you're eating in the shameful darkness of your kitchen at 4 a.m.? Black Star Pastry has the solution to all your poorly-lit culinary woes. The Australian bakery recently introduced glow in the dark doughnuts, appropriately called Glonuts, to their menu, and they'll make you forget galaxy food was ever a trend. Normally, this is the part when I would recommend running, not walking, to get your hands on them, but considering it's on another continent, it's probably a better idea to just book a flight ASAP.

According to Food & Wine, the doughnuts' creator, Christopher Thé, was inspired last year by Sydney's Vivid Festival, a famously dazzling outdoor lighting meet-up. Over the next year, he managed to concoct a recipe for yuzu fruit icing that glows beneath a blacklight without poisoning the person who eats it. Thé told the Australian Daily Mail that the Glonut is made from all-natural ingredients, with no additives or dyes. Like many foods (and drinks) that glow in the dark, its radiant nature comes from vitamin B. The result is a buttery, tart doughnut that looks like it's had a run-in with a radioactive spider.

The bakery team chose to combine the icing with a doughnut because the pastry is naturally messy, so Glonut consumers — or at least their body parts that end up smeared in icing — will glow in the dark themselves even after their treat is long gone. "We thought it would be fun to see people with glow in the dark icing all over their hands and faces so donuts were the natural choice," reads the Black Star Pastry website.

The doughnut is currently being sold for $7 at this year's Vivid Festival, which runs in Syndey until Jun. 17. If doughnuts (inexplicably) aren't your thing, Black Star Pastry is also offering glowing doughnut holes and a black sesame yuzu cake, and it's partnered with N2 Extreme Gelato to sell glowing beverages.

Needless to say, people have taken quite a shine to the Glonut. According to its website, Black Star Pastry has had to increase production to keep up with the demand. However, the bakery is famous for more than aesthetically pleasing festival fare. Its wildly popular Strawberry Watermelon Cake is ever so photogenic, and some have claimed that it's one of the most Instagrammed desserts out there.

So if you find yourself in Sydney this month, be sure to drop by Black Star Pastry's installation in Martin Place for some sweet, radioactive deliciousness. Once you have your luminescent doughnuts in hand, waste no time hitting up the nearest disco. Something tells me that if you show up to one with a dozen Glonuts, you'll be the most popular person there.