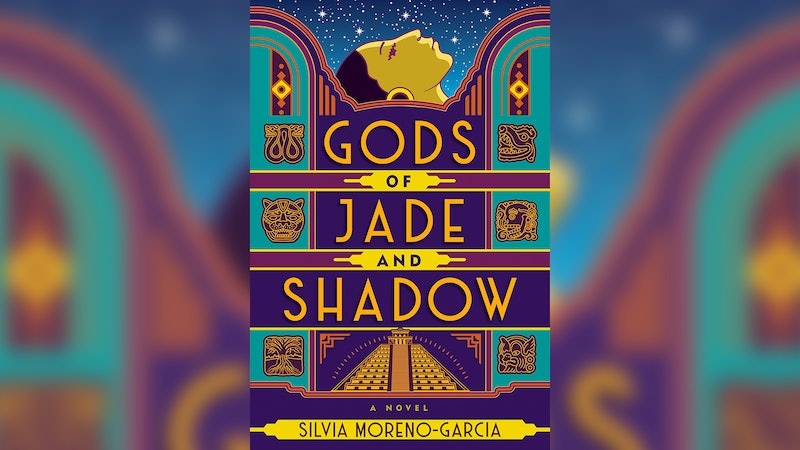 If you've long-desired to read a fantasy novel rooted in the folklore and mythology of Mexico, you will definitely want to pick up Silvia Moreno-Garcia's spellbinding new novel, Gods of Jade and Shadow, out on July 23. Bustle has an exclusive excerpt of the book below!

Here's what you can expect: It's the Jazz Age in Mexico, but Casiopea isn't enjoying it at all: Instead of dancing with handsome gentleman, she is cleaning the floors of her wealthy grandfather's house and dreaming of a life bigger, brighter, and better than the one she has. That's why she does the forbidden and opens her grandfather's secret chest. She hopes it contains all the gold she needs to plot her escape — but instead, it contains the spirit of an ancient Mayan god of death. And now she has to help him reclaim his throne from his two-timing brother. In the adventure that follows, Casiopea journeys from Mexico City to El Paso, from Baja California to the underworld of the dead (and back again) and learns a thing or two about who she is and who she wants to be in the process.

Gods of Jade and Shadow is a magical fairy tale about identity, freedom, and love, and it's like nothing you've read before. For a taste of the novel, start reading below — fair warning: you'll want to read the whole thing once you've begun.

Excerpt: Gods of Jade and Shadow by Silvia Moreno-Garcia

When her family left the next morning, Casiopea went to her grandfather’s room and sat on the edge of the bed. He’d piled his shirts on a chair. Casiopea had brought her sewing kit but upon the sight of the stupid shirts she tossed the sewing kit against the mirror atop the vanity. She would not ordinarily have allowed herself such a visible demonstration of her rage, but this time the anger was too overwhelming and she thought she’d catch on fire. She must cool down. Afterward, she would be able to take a deep breath and push the thread through the eye of the needle, stitching new buttons in place.

Something metallic rattled and slid off the vanity. With a sigh she rose and picked it up. It was grandfather’s key, which he normally wore around his neck. Since he’d gone to the waterhole he’d left it behind. Casiopea stared at the key resting on her palm and then at the chest.

Casiopea endured, patiently, like her mother asked her to, but the girl was no saint, and every mean remark she swallowed had accumulated like a bloated tumor.

She’d never opened it, never dared to attempt such a thing. Whatever lay in there, whether it was gold or money, it must be valuable. And she recalled that the old man was going to leave her nothing. She had not stolen from Grandfather; it would have been idiotic since he would notice it. But the chest . . . if it was gold coins, would he truly notice the absence of a couple of them? Or better yet, should she take all of them, would he be able to stop her from running off with his treasure?

Casiopea endured, patiently, like her mother asked her to, but the girl was no saint, and every mean remark she swallowed had accumulated like a bloated tumor. If the day had not been so warm, with a heat that scrambles the senses, the kind of heat that makes a tame dog bite the leg of its owner in an act of sudden betrayal, she might have eluded temptation. But she was feverish with her quiet anger.

She slashed at the cycle of her pitiful existence and decided that she’d look inside the chest, and if there was indeed gold inside, damn it all to hell, she’d take off and leave this rotten place behind. If there was nothing — and most likely there was nothing and this was but a quiet act of rebellion, which, like the tossing of the sewing kit, would serve as a tepid balm to her wounds — then she would at least satisfy her curiosity.

Casiopea knelt in front of the chest. It was very simple, with carrying handles on each end. No decorations except for the one image painted in red, the decapitated man. When she ran her hand along its surface, she discovered shapes that had been carved and painted over. She could not tell what they were, but she could feel them. She gave the chest a push.

'Gods of Jade and Shadow' by Silvia Moreno-Garcia

Casiopea rested both hands on the chest and for a moment considered leaving well enough alone. But she was angry and, more than that, curious. What if indeed there was money locked away in there? The old man owed her something for her suffering.

Casiopea inserted the key, turned the lock, and flipped the lid open.

She sat there, confused at the sight of what lay inside the chest. Not gold but bones. Very white bones. Might it be a ruse? Could the prize be hidden beneath? Casiopea placed a hand inside the chest, shoving the bones around as she tried to uncover a hidden panel.

Nothing. She felt nothing but the cold smoothness of the bones.

This was her luck, of course. Black.

With a sigh she decided enough was enough.

Pain shot through her left arm. She pulled out her hand from the chest and looked at her thumb only to see a white shard, a tiny piece of bone, had embedded itself in her skin. She tried to pull it out but it sank deeper in. A few drops of blood welled from the place where the bone had splintered her.

“Oh, what foolishness,” she whispered, standing up.

Blacker than black her luck. The daykeepers would have laughed predicting her life, yet as she rose, the chest . . . it groaned, a low, powerful sound. But surely not. Surely the noise had come from outside.

Casiopea turned her head, ready to look out the window.

With a furious clacking the bones jumped in the air and began assembling themselves into a human skeleton. Casiopea did not move. The pain in her hand and the wave of fear that struck her held the girl tight to her spot.

He seemed a warrior-king, the sort of man who could exist only in myth.

In the blink of an eye all the bones clicked into place, like pieces in a puzzle. In another instant the bones became muscle, grew sinews. In a third blink of the eye they were covered in smooth skin. Faster than Casiopea could take a breath or a step back, there stood a tall, naked man before her. His hair was the blue-black of a sleek bird, reaching his shoulders, his skin bronzed, the nose prominent, the face proud. He seemed a warrior-king, the sort of man who could exist only in myth.

Unnaturally beautiful the stranger was — this was beauty sketched from smoke and dreams, translated into fallible flesh — but his dark gaze was made of flint. It sliced her to the core, sliced with such force she pressed a hand against her chest, fearing he’d cut through bone and marrow, to the very center of her heart. There was a song the girls of her town sometimes sang; it went “Now there, mother, I’ve found a man, now there, mother, I’ll dance along the road with him, now there I’ll kiss his lips.” Casiopea did not sing it because, unlike the girls who smiled knowingly, who smiled thinking of a specific young man they’d like to kiss or whom they’d kissed already, Casiopea knew few names of boys. She thought of that song then, like a pious person might have thought of a prayer when caught in a moment of turmoil.

Casiopea stared at the man.

“You stand before the Supreme Lord of Xibalba,” the stranger said. His voice had the chill of the night. “Long have I been kept a prisoner, and you are responsible for my freedom.”

Casiopea could not string words together. He had said he was a Lord of Xibalba. A god of death in the room.

More like this
10 New Must-Read Books Out This Week
By K.W. Colyard
In Elizabeth Strout’s Novels, The World Changes But People Stay The Same
By Morgan Leigh Davies
Rhaenyra's Sons May Not Last Much Longer On 'House Of The Dragon'
By Grace Wehniainen
Aemond Targaryen's Fate On 'House Of The Dragon' Is Full Of Revenge In The Book
By Grace Wehniainen
Get Even More From Bustle — Sign Up For The Newsletter