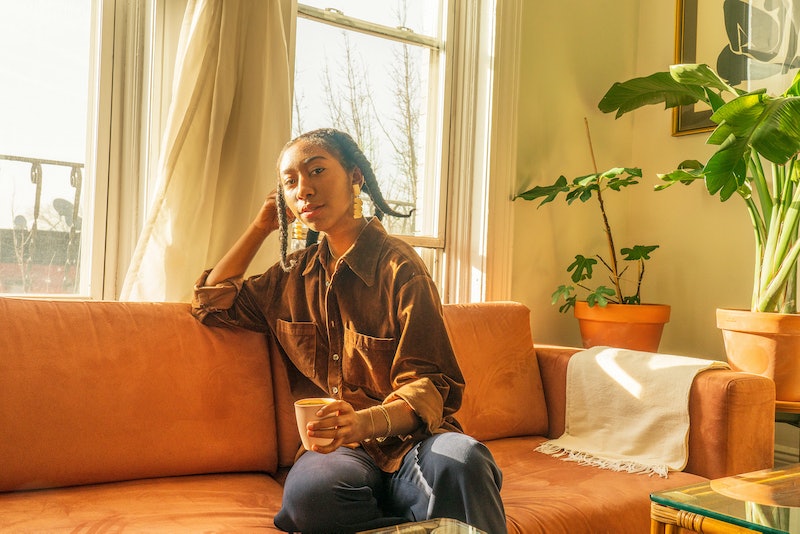 Trinity Mouzon Wofford / Courtesy of Golde
By Stephanie Long
May 14, 2019

In the two short years that clean beauty and body brand Golde has existed, the company’s mission to “bring good vibes to the wellness industry” has unfolded at lightning speed. With its signature turmeric tonic blend now available at multiple well-known retailers — Urban Outfitters, Madewell, and Goop, to name a few — and the recent introduction of its superfood face masks, Golde is well on its way to becoming a staple in the booming self-care world.

The brand’s roots reach back to founder Trinity Mouzon Wofford’s upbringing in upstate New York’s Saratoga Springs, where she and Golde's co-founder, who is also her longtime boyfriend, Issey Kobori met. Conceived when they were just 23, the self-funded startup centers itself upon the foundation of making wellness accessible for people of color in a time when the idea of being well can feel out of reach for many — something Mouzon Wofford knows first-hand.

“I was raised by a single parent who was dealing with an autoimmune disease,” Mouzon Wofford shares with Bustle. “My mom has rheumatoid arthritis, which is essentially characterized by your immune system attacking your joints.” While her mother initially dealt with limited mobility, Mouzon Wofford says her mother's symptoms lessened when she began to see a holistic physician. “It was almost night and day,” she explains. “She went from being bedridden for a few days out of the week to just leading a normal life, and that was really eye-opening for me.”

But when her mother had to stop seeing the new doctor due to unaffordable fees, Mouzon Wofford found herself at a crossroads. “From that point, I had this moment of sort of internal reckoning of ‘OK, am I going to practice holistic care for the community that can comfortably afford it? Or am I going to try to do something to try to fix the medical insurance industry?’" she recalls.

Ultimately, after receiving a psychology degree and working in marketing at a tech startup, Mouzon Wofford decided that creating Golde was the way to go. And since following this path, she's not only created an affordable beauty and wellness brand, but she's also made history as the youngest Black woman to launch a beauty line at Sephora; a milestone in an industry that has historically made Black women an afterthought, despite this cohort spending $465 million on skin care products in 2017 alone.

“It’s unfortunate that wellness has been relegated to this category of white things, that taking care of yourself is inherently not something women of color should be engaged in,” Mouzon Wofford laments. “I think wellness is always a couple of steps behind, so I hope to see more founders of color in the wellness space. I hope to see more people of color represented in imagery that represents wellness and taking care of yourself. I think there’s a lot we can still do there.”

Her business triumphs aside, Mouzon Wofford — who says she's generally feeling good about the growth of Golde — still admits her accelerated rise was not free of trials and tribulations.

“I think from the outside, it definitely looks a bit more fairytale than of course it is in reality,” Mouzon Wofford says, alluding to the social media facade that often makes life appear glossy. “There’s a lot of work and hard learnings that have gone on in the last two years."

For instance, she shares a time when one of the manufacturers melted an entire production run of the Cacao Golde and Matcha Golde blends in a commercial blender, ruining thousands of dollars worth of product. The kicker: Customers had already placed orders for these products, expecting them to arrive in time for the holidays. On top of that, Mouzon Wofford was scrambling to sort out packaging, since the original colors she had chosen didn't match the recent batch of pouches sent to her by the printer. But luckily, at least for the packaging, she was able to find a solution. “We found [a printer] in the eleventh hour, and I mean the eleventh hour,” Mouzon Wofford shares as she exasperatedly recalls the nerve-wracking event. “Normally these pouches take like 12 weeks; we found someone that was willing to do it for us in 10 days.”

But the chaotic events, she says, are just par for the course when it comes to entrepreneurship. “A lot of what we’ve done over the past two years is just fail fast and learn and move forward,” Mouzon Wofford explains.

Even so, it's clear from the outside looking in that Mouzon Wofford is poised to become a notable individual in the Black and brown wellness movement, alongside the likes of Hannah Bronfman — who featured Golde on her YouTube channel last year — Sophia Roe, Lauren Ash, and the many trailblazing women of color reclaiming their seats at the table. Each of these women, while all carving out their own sectors within wellness, are vital figures for creating more representation in this space.

“I think we’re in a really interesting moment now where there is a lot of excitement behind inclusivity and diversity," Mouzon Wofford muses. "There is an openness now for people of color to engage if they feel comfortable."

As for what she personally hopes for the future, she says it's all about her original goal: helping people in her community embrace self-care without the exorbitant price tag. “It feels good to be arriving at this point now, but it doesn’t necessarily feel like we’ve arrived at what you would call success," she says. "The biggest thing that I’m focused on is continuing to build out an array of products that serve this superfood space in beauty and wellness, and making it accessible and approachable."