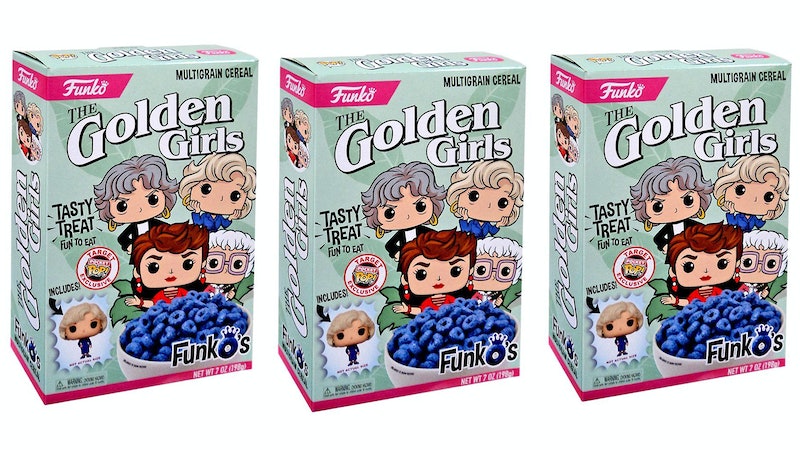 Hold on to your Betty Whites because there’s a brand new Golden Girls cereal that will have you saying “oh my Blanche.” While you may not be able to leisurely enjoy a rerun of the classic sitcom every morning, pop culture toy company Funko is hoping to bring a little bit of your favorite Miami-based friends to your breakfast table.

A representative for Funko told TODAY that cereal is a Target exclusive. The Golden Girls “Funko’s” were first made available at the end of September. After people started sharing their cereal aisle find on social media, the limited edition cereal gained greater attention. According to Funko (and the myriad tweets to Target corporate asking “WHERE ARE MY GOLDEN GIRLS FUNKO’S???”) the cereal is hard to come by in stores and is selling out quickly. If you’re desperate for that Golden Girls-themed cereal fix, a few online retailers are selling boxes of the Funko’s at a steep price: you can get a box at Mercari for $19 or on ToyWiz.com for a whopping $99.99. Is the cereal really worth $100? I guess it depends on whether you think you can quantify your love for the Golden Girls in U.S. dollars.

At Target, the cereal is priced at $7.99, which is still pretty pricey for a box of cereal. What does $8 Golden Girl-themed cereal look like? Apparently, bright blue Cheerios. The cereal is inexplicably a deep blue and contains multigrain loops which look about the size of Apple Jacks or Froot Loops. Why are they blue? Why are they loops? More importantly, do they taste like cheesecake?

Pictures of the cereal leaves us with more questions than answers, to be honest.

Funko hasn’t provided any explanation for the color of the cereal. (Perhaps it’s to coordinate with Rose’s blue suit? Am I seeking meaning in that which has none???) In fact, the cereal box packaging appears to be the most Golden Girl-specific part of the cereal. The front of the box features illustrations of Blanche, Dorothy, Sophia and Rose in the style of Funko’s POP! TV figurines. The back of the box has a maze which seems completely unrelated to Golden Girls and more just in the vein of “cereal box activities.”

There’s also a message on the back of the cereal box which reads, "Hey kids, remember what it was like to sit in front of the TV on Saturday morning and watch cartoons while eating your favorite cereal?! Well, Funko does! So we're bringing back Saturday morning to kids of all ages with our new sugar toasted FunkO's!"

Each box of cereal comes with a collector’s toy inside a la breakfast cereals of yesteryear. (If you’re trying to collect ‘em all without having more bowls of blue cereal than you know what to do with, you can buy all four Golden Girls figurines on Amazon or at Walmart.)

The company told Refinery29 the cereal is part of a larger retro TV campaign which will be running at Target from September 30 through November 10. A July press release for the campaign said the cereals will also extend to other pop culture fandom favorites. “Inspiring fans to connect with their favorite pop culture moments in a novel and delicious way, the new cereals continue the Funko tradition of developing collectible products with fun and whimsical designs,” the press release reads. “Each cereal box will include a corresponding miniature Pocket Pop! figure and the back panel will feature additional themed activities, puzzles, and games.”

If you’re looking for some ooky spooky cereal, the collection will include Halloween movie favorites like It, Nightmare on Elm Street, and Friday the 13th. All three of those cereal will feature red loops because...blood? Regardless, the cereals are sure to be a hit with anyone who’s a diehard pop culture fan or anyone who can’t resist a limited-edition Target item.