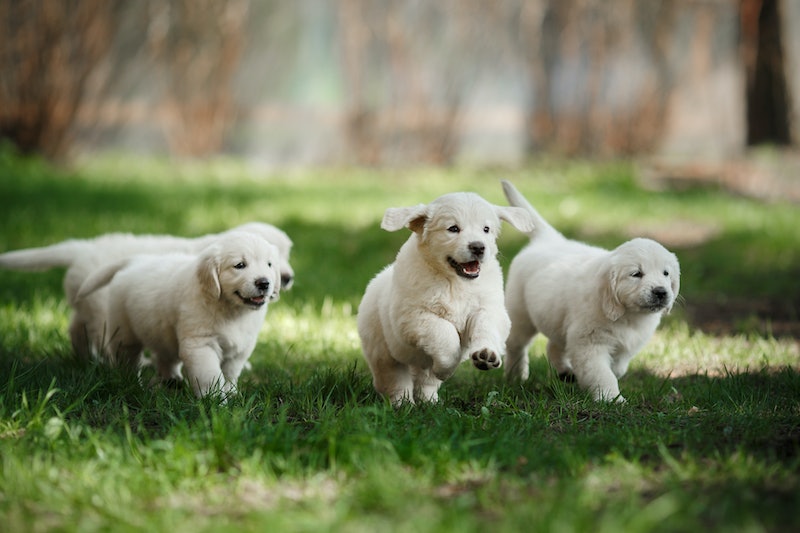 An unprecedented, perhaps even record-breaking event went virtually under-the-radar last week. Unlike many of the headlines that occupy the present news cycle, this one is absolutely joyous. Last week in Scotland, more than 350 Golden Retrievers Golden Retrievers gathered to celebrate the breed's 150th anniversary. The gathering of the goldens, if you will, took place among the rolling hills of the 19th century estate of Lord Tweedmouth, a Scottish aristocrat. Photos of the event depict heaven on earth in the form of 361 pups enjoying each other's company in a picturesque setting sure to woo Downton Abbey devotees worldwide.

Interestingly, Lord Tweedmouth's Estate was not chosen purely for aesthetic purposes. The location, in fact, has a storied history with the breed. According to CBS News, the legend goes that Lord Tweedmouth was in dire need of a companion to accompany him on hunts. He needed a dog who could handle both the rocky mountain terrain and soggy marshes one finds frequently in Scotland. So, instead of compromising, he did what any good aristocrat would do and created a whole new breed of pup. He is said to, per CBS News, "have crossed a wavy-coated retriever with a tweed-water spaniel to create the forerunner of the golden retriever — equally at home on both land and water."

The Golden Retriever Club of Scotland organized the gathering, which included events like a breed championship show, and a 300-pup procession on the first night. But, don't be mistaken, the event was not pedigree-exclusive. Doreen McGugan, chair of the Golden Retriever Club of Scotland, told TODAY, "It was a lot of pet owners who came just to join the fun," she said. "People didn’t realize that it all went back to this and that there is a place to go to commemorate [the breed]."

Initially founded in 1946 by "Field Trial enthusiasts who wished, amongst other things, to add the Showing of their dogs to their other activities," the club now focuses on its mission to "[e]ncourage the breeding and type of the Golden Retriever laid down in the Breed Standard." In recent years, The Golden Retriever Club of Scotland have actively focused on the health problems the breed often faces, and has worked with other Breed Clubs and the Golden Retriever Breed Council to combat these. It has also become involved in work with service dogs, in particular with "Hearing Dogs for Deaf People," and aims to end the widespread work of puppy mills.

It is hard to believe the sunny, smiley, happy-faced Golden Retriever has only been making people smile for more than a century. Seeing hundreds of golden pups frolicking in the fields of the Scottish countryside is enough to make the heart of any dog lover sing. Pour one out for Air Bud.