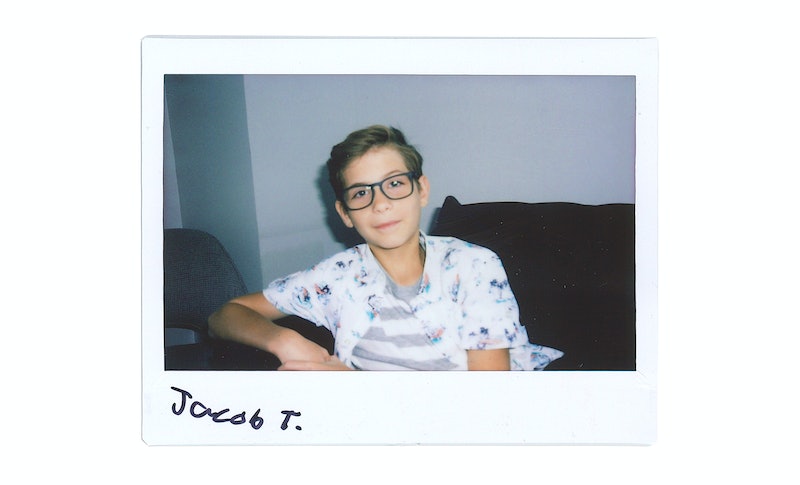 When celebrities hang out with Bustle editors, we want to give them the chance to leave their mark. Literally. So we hand them a pen, a piece of paper, a few questions, and ask them to get creative. This time, Good Boys star Jacob Tremblay is leaving his mark in the Bustle Booth.

His new raunchy comedy Good Boys is not the most adult movie 12-year-old Jacob Tremblay has been in. Not by a long shot. After getting rave reviews for his affecting performance in 2015's abuse drama Room, the already experienced actor moved on to other serious, "grown-up" fare (The Predator, Shut In), with a few more kid-friendly projects like Wonder sprinkled in. He's more than held his own opposite Naomi Watts, Julia Roberts, and his bestie Brie Larson, but in Good Boys, Tremblay gets to spend the majority of his screen time with his peers, which made being on set feel like hanging out with friends.

"I like [working with kids my age] a lot, because after you’re done filming and after you’re done [with] scenes, you can just hang out with them and be able to talk about stuff that they understand," he says, highlighting the animated series Voltron and Avatar: The Last Airbender as frequent topics of conversation.

Good Boys shot in Tremblay's hometown of Vancouver, meaning that his family — including his Instagram-famous dog Rey — were on set with him a lot, too. "She’s kind of shy," he says of his pup. "She can get anxious sometimes, but otherwise, she’s really good with people." Playing with Rey, Tremblay remembers, is how he first bonded with Good Boys producer Seth Rogen. During the Good Boys press tour, she was enjoying her first visit to New York City.

According to Tremblay, he, Keith L. Williams (Lucas), and Brady Noon (Thor) all have a little bit in common with their Good Boys characters — three forever buddies who are navigating growing up and what their changing interests (including "kissing parties") will mean for their friendship. Tremblay relates to Max, he says, "in the sense that we’re both sort of discovering who we are and discovering what types of people we like to hang out with."

As far as R-rated comedies go, Good Boys is hopefully a glimpse of the future. There's an abundance of dirty jokes — plus Tremblay's favorite sequence, a fight scene in which the tweens take on an entire frat house, "shooting paintballs and like, flipping people over your shoulder and smacking boards over people’s backs." But there's also an inherent sweetness and mentions of consent that are endearing instead of preachy — kids repeating lessons because those lessons make sense to them. "You can feel like you can laugh without being uncomfortable about a joke," is how the actor sums up the tone of the movie.

With as many roles as Tremblay tackled, he also has his whole career ahead of him. He wants to do it all, basically, including continuing to make people laugh, possibly in a movie with his comic actors idols, Jack Black, Kevin Hart, and Adam Sandler. If that movie can incorporate his uncanny Tommy Wiseau impersonation, all the better.

Learn about more of Tremblay's favorite things in his Bustle Booth below.