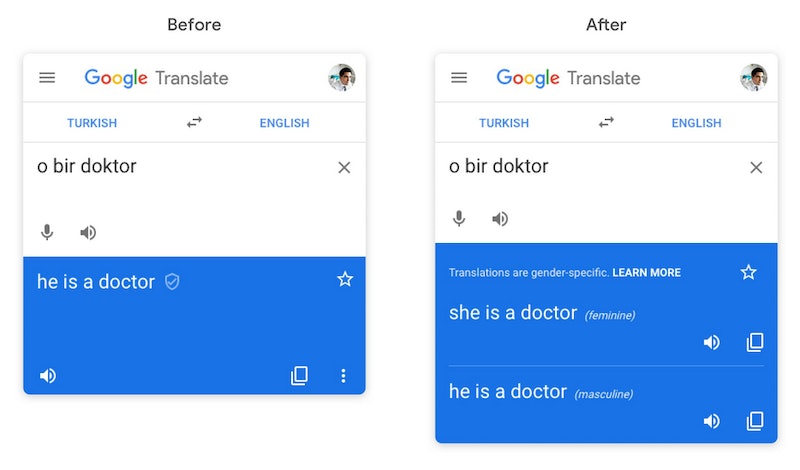 Google is working to make the web more gender equitable by reducing the gender bias on Google Translate, engadget reports. On Dec. 6, Google announced that its Google Translate service will stop defaulting to the masculine option for some languages, says engadget, offering both a masculine and feminine translation when either are available. The new feature is currently only available when translating English to French, Italian, Portuguese, or Spanish, and when translating from Turkish to English, according to engadget.

This isn’t the first move Google has made to make their products more gender neutral. In November, Google stopped predicting people’s genders in its Smart Compose tool in Gmail, according to Cnet. Google decided to make the change after one of its research scientists typed, “I am meeting an investor next week,” says Cnet, and Smart Compose suggested, “Do you want to meet him?” Google’s Paul Lambert told Cnet that was the kind of gender bias Google simply did not want to see in its AI, so they eliminated gender predictions from the tool.

What might seem like a minor change to an everyday tool is actually a major move toward gender equity. The way people use language is one of the most powerful ways gender discrimination is perpetrated, according to the Oxford Research Encyclopedia of Communication. Masculine terms are often used as a neutral to refer to men, women, and nonbinary people, says the Oxford Research Encyclopedia of Communication, essentially rendering women and nonbinary people invisible. And, according to the Oxford Research Encyclopedia of Communication, the language people use affects the way they think about groups of people. So the more people use language that exacerbates gender-based stereotypes, the stronger those stereotypes become.

According to the Annals of Surgery, there’s a growing body of evidence that shows when societies use gendered language consistently, they exhibit greater gender inequality overall than societies that use gender-neutral language. That’s because the way people use language can affect their implicit biases, says Annals of Surgery, which are the unconscious beliefs and attitudes they have about gender. That’s why using gender-neutral language is so crucial to reduce instances of gender discrimination and stereotyping.

The new Google Translate feature will be available in other languages in the future, as well as the Android an iOS apps, FastCompany reports. But Google isn’t done dreaming up new features to reduce gender bias, says FastCompany; the company is also looking into query auto-complete and how to address nonbinary translation queries.

It's encouraging to see Google include nonbinary folks in their pursuit of gender equity on the web. Inclusion of feminine translations is a great first step, but it's just a very small step. The world is waiting for technology to catch up, and it really is about darn time.