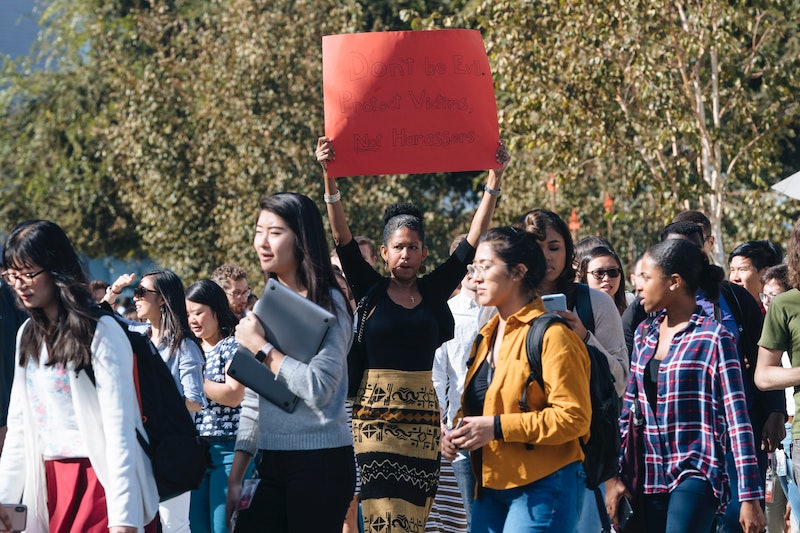 Google employees have fought to change workplace policies and promote transparency for months. Now, two Google walkout organizers say the company is punishing them for their work in last November's demonstration, wherein some 20,000 employees walked off the job.

"Google has a culture of retaliation, which too often works to silence women, people of color, and gender minorities," wrote Google employees Meredith Whittaker and Claire Stapleton, according to a copy of an internal letter obtained by Fortune. Bustle has reached out to Google for comment.

In the letter, both Whittaker and Stapleton detail how their experiences at Google changed following the November walkout. Earlier this year, Google broke up its artificial intelligence (AI) ethics council after some employees pushed back against the appointment of a hardline, right-wing figure, according to The Guardian. After the council was disbanded, Whittaker said she was told that her position at Google would change dramatically, if she wanted to keep working there, reports Fortune. If she stayed at Google, Whittaker said, she would have to give up her work in the realm of AI ethics at the company.

“I have worked on issues of AI ethics and bias for years, and am one of the people who helped shaped the field looking at these problems,” Whittaker said in the letter. “I have also taken risks to push for a more ethical Google, even when it less profitable or convenient.”

In turn, Stapleton said that Google made moves to demote her two months after November's demonstration. As part of the demotion, she said she would lose half of her reports and no longer be able to pursue a project that had already been approved, per Fortune. When she brought the issue to human resources and other internal authority figures, Stapleton said that the situation only got worse.

“My manager started ignoring me, my work was given to other people, and I was told to go on medical leave, even though I’m not sick,” she said in the letter, per Fortune.

This was eventually resolved, Stapleton wrote, after she involved a lawyer. But work, she says, has not been the same.

“While my work has been restored, the environment remains hostile and I consider quitting nearly every day,” Stapleton said.

Google has told news outlets that retaliation is not allowed within the company, and that it takes such allegations seriously.

“We prohibit retaliation in the workplace, and investigate all allegations,” a Google spokesperson told The New York Times in response to reports about employee retaliation. “Employees and teams are regularly and commonly given new assignments, or reorganized, to keep pace with evolving business needs. There has been no retaliation here.”

In the letter, both Stapleton and Whittaker maintained that they believed they were being punished by their employer.

“Retaliation isn’t always obvious,” the pair wrote in the letter, according to a copy of the correspondence published by Wired. “It’s often confusing and drawn out, consisting of icy conversations, gaslighting, project cancellations, transition rejections, or demotions. Behavior that tells someone the problem isn’t that they stood up to the company, it’s that they’re not good enough and don’t belong.”