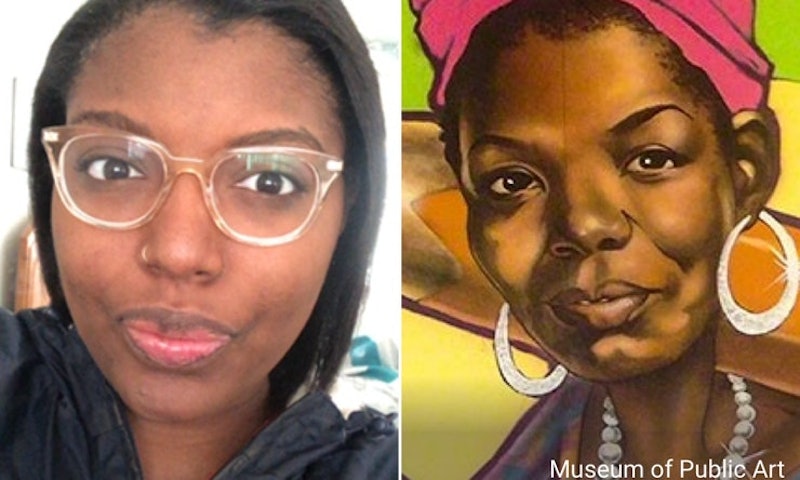 The Google Arts & Culture app has kept me entertained for the last several days thanks to its museum doppelgänger feature, which allows you to find artwork containing people that look like you. It's at the top of both iOS and Android app charts right now, so it's safe to say the app is doing pretty well with its target audience. But even though the museum twin feature is wildly popular, some people are wondering if the Google Arts & Culture app is racist because of how it matches certain users with paintings in its collections — but this backlash points to how the art world as a whole needs to up its inclusivity.

While it's to be expected that some matches are more accurate than others, Asian and Latin American users in particular have reported results that either feature stereotypical images or don't match their ethnicity at all. Google tells Bustle that the app can't provide perfect matches because its database of artwork only has so many faces available — a blog post from the company notes that the app pulls from a collection of 6,000 exhibitions from museums in over 70 countries. The concern doesn't seem to be that the technology is racist. Rather, people are viewing the Google Arts & Culture app as a reflection of a much larger issue in the art world: People of color often aren't represented as frequently as white people, and if we are, many of the representations often feel offensive or inaccurate.

Karen Vidángos, founder of A Latina In Museums, tells Bustle, "Google Arts & Culture's ongoing efforts to create a platform for a larger audience has its limitations, but is incredible for the goals it's trying to achieve. The app is a great way to reach and engage people in ways a single museum might not be able to." At the same time, it needs to be acknowledged that "The collecting practices of museums have long favored a more Eurocentric approach," and that this curatorial perspective "no longer connects with an increasingly diverse audience," she says.

When you look at the demographics of working artists, it's not hard to see why people of color may feel underrepresented whether we're walking through a museum or trying to find our museum twin. One study found that nearly 80 percent of the people who earn a living from their artwork are white. A 2013 essay published by German news broadcaster Deutsche Welle about the end of Eurocentric art notes that the art world at-large began to welcome work from African countries only in the 1900s. Google's database has portraits dating back to the 1300s, which means that African artists in its database have been receiving widespread acclaim for much less time than white artists. It's no surprise that people see Eurocentricity in art culture, or the centering of European artists and culture while ignoring the talent of artists from non-Western countries, as a reflection of systemic racism as a whole.

It's clear that the Google app isn't entirely to blame for this gap in inclusivity. As Michelle Obama pointed out in 2015, museums have a hard time attracting people of color, and it's fair to ask whether that's because we don't feel represented when we look at portraits in museums. Google introduced the selfie feature as an amusing thing to try, not an exact science, so it's natural to take your matches with a grain of salt. But the results some people of color have received have sparked a conversation about what a truly inclusive art world — including fun, viral apps that match your likeness with your art history doppelgänger — would look like.

I wasn't particularly impressed with my match — you can see it in the photo at the top of this story — but I didn't consider the racial implications until a friend, who is a person of color, jokingly mentioned she got the same painting as me and we look nothing alike. Yes, Google Arts & Culture is a fun tool that isn't meant to be taken seriously, but it's become yet another reminder for people of color that we so often aren't fairly depicted in popular culture.

Vidángos notes that there are many ways, however, to engage with inclusive art in and out of a museum setting. "While Google Arts & Culture is an immense, far reaching undertaking that I want to see include more diverse art, there are so many wonderful museums, exhibitions, projects, and happenings at the local level that need our attention," she tells Bustle. She recommends Museum Hue, Brown Girls Museum Blog, as well as her own A Latina in Museums, as online resources to encounter art that represents marginalized voices. The Google Arts & Culture app may have started out as a fun way to find a surprise doppelgänger, and learn more about art at the same time, but it's emphasizing a cultural problem that's impossible to ignore.