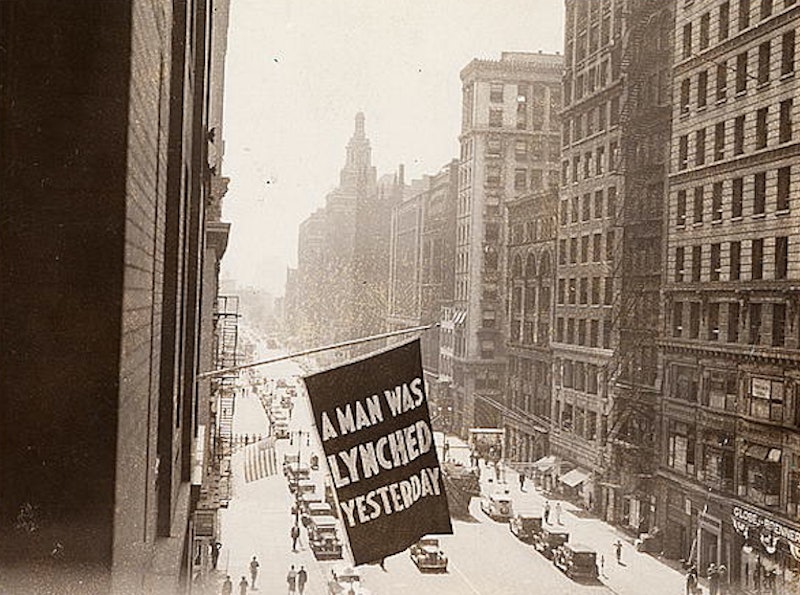 A new website produced by Equal Justice Initiative, a nonprofit dedicated to fighting for racial civil rights, partnered with Google.org, Google's philanthropic branch, to chronicle the extensive, horrific history of lynching in the United States. The project — titled "Lynching in America" — provides a powerful and harrowing record of one of the ugliest parts of American history.

An interactive map detailing the number of lynchings in 20 states, along with audio stories, videos, and an extensive 77-page report can be found on the site. Upon visiting the page readers will be presented with the website's purpose:

In order to heal the deep wounds of our present, we must face the truth of our past. After slavery was formally abolished, lynching emerged as a vicious tool of racial control to reestablish white supremacy and suppress black civil rights. More than 4,000 African Americans were lynched across 20 states between 1877 and 1950. These lynchings were public acts of racial terrorism, intended to instill fear in entire black communities. Government officials frequently turned a blind eye or condoned the mob violence. The effects of racial terror lynchings are still felt today.

According to the interactive map, Mississippi had the highest rate of reported lynchings of African Americans between 1877 and 1950 with 654 murders; Georgia comes in second with 589, followed by Louisiana with 549.

It's easy to see the origins of the persisting issue of police brutality and discrimination against racial minorities throughout the EJI's heavily-researched report. One such example is President Johnson's actions allowing white Americans in the South to freely commit violent acts against black Americans without repercussions, resulting in massive tragedies. It reads:

On May 1, 1866, in Memphis, Tennessee, white police officers began firing into a crowd of African American men, women, and children that had gathered on South Street, and afterward white mobs rampaged through black neighborhoods with the intent to 'kill every Negro and drive the last one from the city.'

The connections between police brutality and America's history of lynching has long been a subject civil rights activists have tried to bring to the public's attention. The number of unarmed black Americans killed by police officers are not too far off from the numbers seen on Lynching in America's interactive map. In fact, a study conducted by by the Malcolm X Grassroots Movement found that 313 black Americans were killed by police officers in 2012 alone.

Clearly, this new project is incredibly pertinent to present-day society.