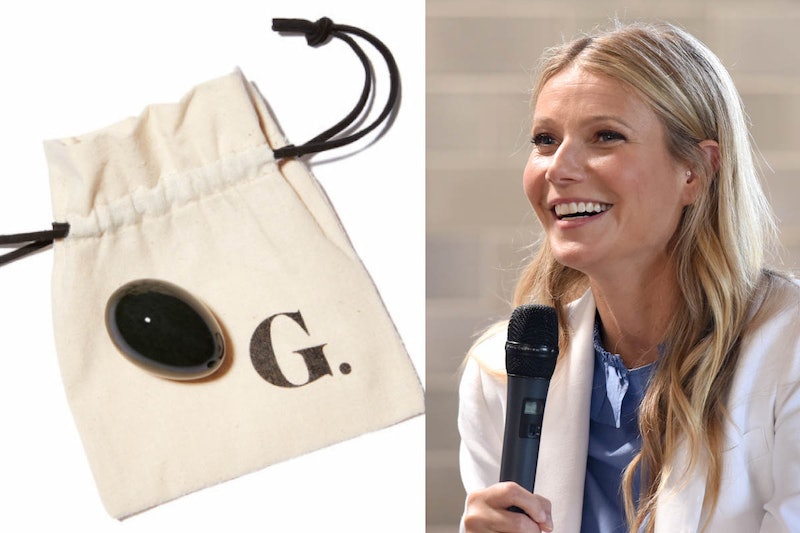 On Tuesday, Gwyneth Paltrow’s lifestyle company Goop, Inc. settled a lawsuit with California prosecutors over allegedly unfounded medical claims attached to some of its products, including stone eggs meant to be inserted into the vagina.

The lawsuit, filed by Santa Clara County District Attorney Jeff Rosen and nine other state prosecutors, alleged that some of the products sold on Goop’s website advertised medical claims that weren’t backed by science. You may remember the backlash over Goop’s Jade and Rose Quartz eggs, stones meant to be inserted vaginally and worn for extended periods of time. Goop allegedly asserted that the stones could “balance hormones, regulate menstrual cycles, prevent uterine prolapse, and increase bladder control,” according to a statement from the District Attorney’s office. It wasn’t just the vaginal eggs under scrutiny, either: Inner Judge Flower Essence Blend, an essential oils blend that Goop allegedly advertised as helping prevent depression, was included in the lawsuit.

In a statement sent to BuzzFeed on Tuesday, Goop's chief financial officer Erica Moore wrote, “Goop provides a forum for practitioners to present their views and experiences with various products like the jade egg. The law, though, sometimes views statements like this as advertising claims, which are subject to various legal requirements." Bustle has reached out to Goop for comment, and we will update this post when we receive a response.

“The health and money of Santa Clara County residents should never be put at risk by misleading advertising,” District Attorney Rosen said in a statement. “We will vigilantly protect consumers against companies that promise health benefits without the support of good science…or any science.”

Goop, which was last valued at $250 million, according to Fortune, will pay $145,000 in civil penalties. The company will also offer full refunds to consumers that bought any of the three items between Jan. 12 and Aug. 31, 2017, as well as cease advertising the products’ medical claims “without possessing competent and reliable scientific evidence,” according to the statement from the District Attorney.

BuzzFeed reported the lawsuit was motivated by a complaint from Truth in Advertising, a watchdog organization. Last summer, the group identified more than 50 instances in which Goop used “deceptive marketing” for products sold on its site, claiming the products could treat numerous health problems including depression, infertility, and anxiety, among others.

Moore's statement continued, “The Task Force assisted us in applying those laws to the content we published, and we appreciate their guidance in this matter as we move from a pioneer in this space to an established wellness authority.”

This isn’t the first time Goop has faced criticism over how it presents scientific claims. In a recent profile of Paltrow for The New York Times, Paltrow said the reason Goop magazine broke off its partnership with media company Condé Nast was due to there being “a lot of rules” at Condé Nast, specifically, Condé Nast’s strict approach to fact-checking. Brodesser-Akner wrote that Goop wanted “to allow the Goop family of doctors and healers to go unchallenged in their recommendations [...] and that just didn’t pass Condé Nast standards.” Standards included factual support behind scientific claims, like peer-reviewed studies.

The company’s $66 Jade egg and $55 Rose Quartz egg are still available for purchase online, though the page for the Jade egg now claims that it can “increase sexual energy and pleasure” by connecting “the second chakra (the heart) and yoni for optimal self-love and well being.” In bold type underneath, it warns customers to follow the instructions included with the egg. At the time of writing, the $22 Inner Judge Flower Essence Blend still claims it can “be used frequently [...] to help prevent 'shame spirals' downward toward depressive states.” It’s currently sold out online.