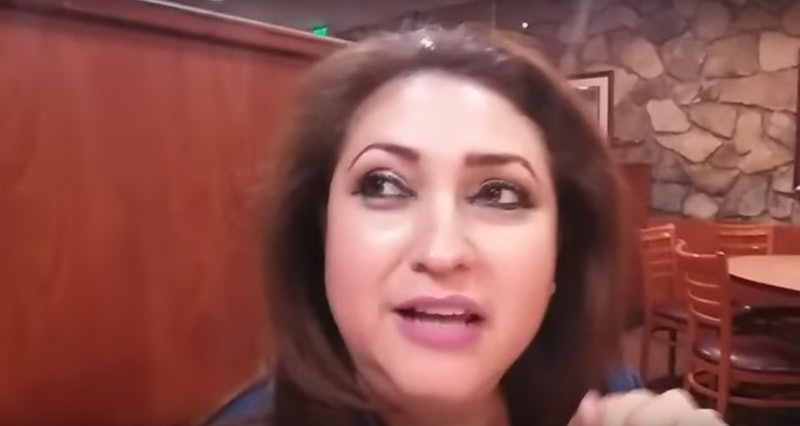 On Tuesday, Republican congressional candidate Jazmina Saavedra harassed a trans woman in the bathroom at a Los Angeles Denny's and shared a video of it online. Saavedra, who's running to represent California’s 44th congressional district, livestreamed herself following the woman into the bathroom, misgendering her and accusing her of violating Saavedra's privacy by using the women's restroom.

"I'm trying to use the ladies room, and there is a man here saying that he's a lady," Saavedra says in the video, which she posted on her Facebook page along with a request for campaign contributions. "A few different customers [are] trying to use the restroom, but the guy insists he's a lady."

"You are harassing me," the woman, who is inside a stall, responds. "I'm just trying to use the restroom, and you're invading my privacy."

"No, you're invading my privacy, because I'm a woman and I deserve to use the woman — the ladies room," Saavedra shouts in response.

"I'm on the toilet," the woman replies. "How am I invading your privacy?

In a subsequent interview with Refinery29, Saavedra defended her actions, and again insisted that the woman "wasn’t a lady, she was a man."

"I heard his voice. I came with my camera, on my phone, to ask him why he was in the women’s restroom,” she said. “The LGBT community is always trying to victimize themselves and twist any story to look like a victim.”

Saavedra added that "anyone can say he feels as a woman and go into the restroom and attack a woman." It's worth noting, however, that there has only been one documented case in United States history of a trans person attacking somebody in a bathroom, according to Reason. It took place in the bathroom of a private home, not a public restroom, and the assailant was ultimately convicted. Aside from that, PolitiFact was unable to identify a single case of a trans person sexually assaulting somebody in a bathroom in the United States.

After the video of Saavedra went viral, the Denny's Corporation responded in a statement, saying that the company is "extremely disturbed by the incident."

"At Denny’s, we do not tolerate discrimination of any kind, inclusive of gender identity and sexual orientation," the statement reads. "We are dedicated to providing a welcoming dining environment for all our guests and believe that our transgender guests and team members should be allowed to use the bathroom of the gender they identify with."

Saavedra's Democratic opponent in the race, incumbent Rep. Nanette Diaz Barragán, said in a statement to the Daily Beast that she's "appalled by the treatment that this woman received for simply trying to use the restroom," and that "everyone has the right to their own identity, and the right not to be discriminated against for who they are."

California's 44th congressional district is ranked "safely Democratic" by Ballotpedia. Under California's jungle primary system, all candidates run in a single primary, and the top two vote-getters advance to the general election regardless of their parties; in 2016, no Republican received enough votes to make it to the general election at all, so Barragán squared off against, and ultimately defeated, another Democrat in the fall.

Saavedra's campaign website says that she's running for Congress "to fight for and truly represent all Californians with their needs and rights."