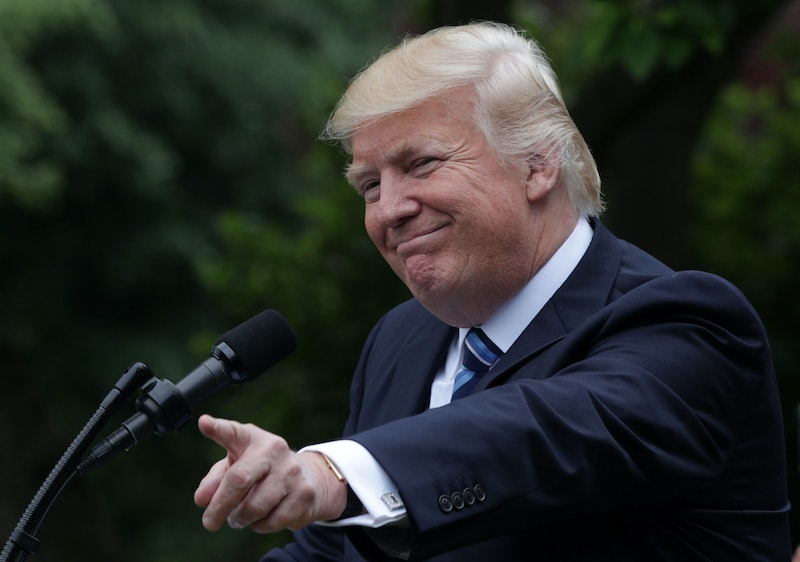 Republican congressman Tom Garrett from Virginia shared a peculiar statement on Donald Trump at a town hall meeting with constituents on Tuesday. After highlighting the faith he invested in the American president, Garrett said that Trump is "small potatoes" compared to Adolf Hitler. In a statement that surely raised some people's eyebrows, Garrett explained his trust in Trump by saying, "America has overcome amazing challenges that Donald Trump, as frightening as he is to some people, small potatoes compared to Nazi Germany."

Garrett isn't exactly off the mark with respect to his outlandish description. In spite of the seemingly endless litany of flaws he has, Trump is "small potatoes" when compared with Hitler. That said, the congressman is conveniently forgetting that many in America have felt justified cause for concern since last year, simply due to the political rhetoric that came from Trump throughout the course of the presidential race. Trump's statements have left Americans and immigrant communities worried about their fundamental rights. After all, during his campaign, Trump said he could shoot "somebody" and still not lose votes.

From claiming that "large segments of the Muslim population" hate America and positing Muslims as "people that believe only in Jihad" to accusing them of having "no sense of reason or respect for human life," Trump has made his views on Muslims abundantly clear. He not only painted a deliberately false image of a religion with 1.8 billion followers, he also made American Muslims question their safety in the United States, a country many Muslims call home.

By calling for a "complete and total shutdown" of Muslims entering the United States, Trump's Islamophobic rhetoric stunned many. Perhaps to put a moratorium on the criticism, the call for a shutdown is no longer available. The URL, however, points to his words.

There's also Trump's statement about Mexicans in 2015. By referring to Mexicans as "rapists" and "criminals," Trump severely alienated the Latinx community in the United States. His language pushed them further to the societal margins by peddling racial stereotypes about them. These racialized tropes regularly affect immigrants.

Similarly, Trump administration's rhetoric concerning Jews has elicited valid concerns about anti-Semitism. The White House's International Holocaust Remembrance Day message omitted a key reference to Jewish suffering in the Holocaust. The White House defended it by terming it an "inclusive" message but this removal of "Jews" from the message on the Holocaust encouraged neo-Nazis to celebrate the omission.

If neo-Nazis resonate with a political figure's rhetoric, there is a serious problem. There is a need to interrogate specifically which elements of such spoken and written substance find a home in such bigoted mindsets. Over time, it became evident that a considerable amount of Trump's political rhetoric appealed to a very specific section of American society: white nationalists.

Going back to Garrett's "small potatoes" descriptor, it is incredible how out-of-touch and discordant the Republican congressman's understanding of the current political landscape is. Garrett is forgetting that instead of feeling a surge of hope for America's future, Trump's victory led racial and religious minorities into a state of fear for their safety. Muslim women feared for their lives after his triumph, immigrants are afraid of reporting abuse or injuries out of concerns of deportation, Jews and LGBTQ community members fear their own welfare. The terror is not a matter of hysterics or baseless paranoia. It's rooted in Trump's words and the policies he's pushed for.

It makes sense that Trump is "small potatoes" in Garrett's mind. Garrett, a 45-year-old white male conservative from Virginia, is far from a minority. He lives comfortably in the center of American culture that is shielded from the repercussions of such political animus. But to those living on the periphery of American society, Trump's rhetoric is not "small potatoes," but an existential threat to their well-being.