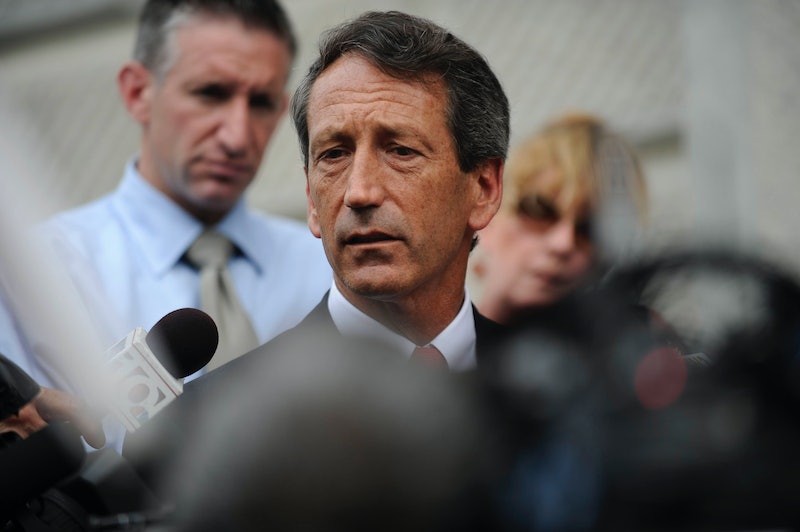 In the aftermath of Wednesday's shooting at a northern Virginia baseball field that left GOP Congressman Steve Scalise hospitalized, fingers were pointed back and forth across the aisle. The tragic shooting seemed painfully indicative of the contentious political climate that has existed in the country for quite some time. In a particularly poignant response, a Republican congressman blamed President Trump's rhetoric for Scalise's shooting.

In an appearance on MSNBC's Morning Joe on Thursday, Rep. Mark Sanford, who hails from South Carolina, called the president's inflammatory rhetoric at least "partially" to blame for Wednesday's violence. He went on to say, "If you let these forces play out, I think we end up at a very, very bad spot. What happened yesterday was symptomatic of it." Of all the fingers pointed at politicians and political discourse following the shooting, Sanford's may have been the only one not to cross the aisle.

The president is at least partially — again, not in any way totally, but partially — to blame for demons that have been unleashed ... The fact that you know, you’ve got the top guy saying, ‘Well, I wish I could hit you in the face and if not, why don’t you, and I’ll pay your legal fees.' That’s bizarre; we ought to call it as such.

For his part, President Trump responded to the shooting on Wednesday by celebrating the "heroic actions" of the Capitol police officers who responded to the "very, very brutal assault." He also called Scalise a "very good friend," "a patriot," and "a fighter." While he faced criticism for using divisive rhetoric, the president called on Americans to come together in the wake of Wednesday's shooting.

We can all agree that we are blessed to be Americans, that our children deserve to grow up in a nation of safety and peace, and that we are strongest when we are unified and when we work together for the common good.

Sanford wasn't the only legislator to distribute blame after Wednesday's shooting. Democratic Rep. Nancy Pelosi reportedly pointed a finger at Fox News, recalling a threat that she previously received from an unnamed man. Pelosi reportedly said, "His mother said, `He just watches too much Fox TV.’ That’s what she said."

Meanwhile, on the right, GOP Rep. Steve King blamed former President Obama for creating a divisive political climate. "He contributed mightily to dividing us," King reportedly said of Obama. "He focused on our differences rather than our things that unify us — and this is some of the fruits of that labor."

As Scalise remained hospitalized on Thursday night, his fellow lawmakers took a step toward unification. Despite the tragedy just a day earlier, the annual congressional baseball game went on as planned. Although the Democrats won the game, Rep. Mike Doyle, the Democratic team manager, asked Republicans to put the coveted trophy in Scalise's office.