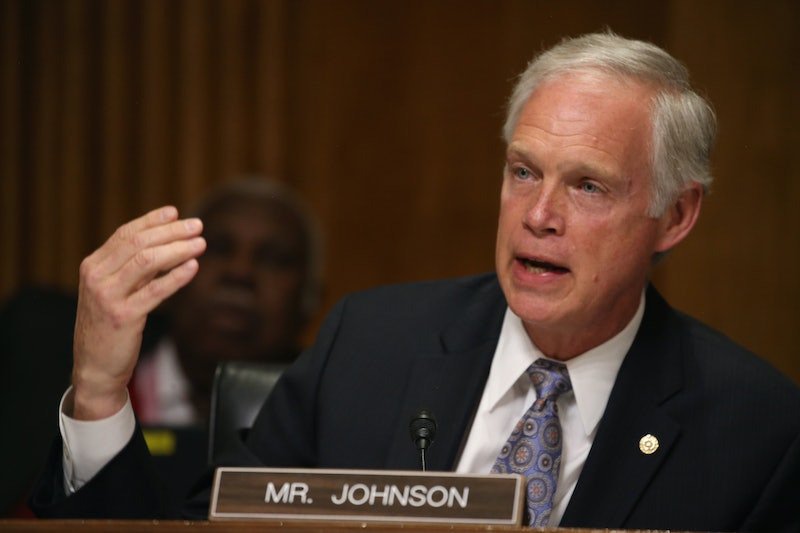 It should be no surprise that not all lawmakers believe health care is a basic human right. After all, it's that disagreement that has made the U.S. notoriously slow in passing and implementing any health care reform measures. Amid this fervent disagreement, one Republican lawmaker on Friday found a way to make the argument against universal health care particularly hard to sell: Speaking to a group of Wisconsin high-schoolers, Sen. Ron Johnson called health care a "privilege," along with food, clothing, and shelter.

Johnson addressed students from New Berlin West High School in his home state of Wisconsin on Friday. According to local ABC affiliate WISN, Johnson participated in a forum on politics, journalism, and government. While there, a student asked Johnson if he considered health care a privilege or a right. In response, he called it a privilege and posed a couple of his own questions back to her.

According to Johnson, Americans have a right to life, liberty, the pursuit of happiness, and freedom, and that's it. "Past that point, everything else is a limited resource that we have to use our opportunities given to us to afford those things," he said. In other words, Americans don't have a right to health care, food, clothing, or shelter.

Johnson also referenced an argument made by Sen. Rand Paul, a former physician, who previously compared health care as a right to slavery. For Johnson's part, he argued that it's the duty of lawmakers to create an economic environment where Americans can afford things like health care, food, and shelter. His argument isn't completely unheard of, but there could be a problem with it: According to a June report from The Atlantic, many Americans cannot afford health care services, even with their insurance policies.

Last month, Johnson joined several of his Republican colleagues in unveiling a new plan for health care reform. According to Johnson's statement announcing the plan, it appeared to be aimed at fulfilling the senator's argument, creating an environment where Americans can afford health care. The so-called Graham-Cassidy-Heller-Johnson bill, more commonly known as the Graham-Cassidy plan, would repeal the Affordable Care Act and replace it with a system of grants to states that would allow states to help their residents afford insurance. The Congressional Budget Office reviewed the plan, however, and determined that although the bill would reduce the national deficit by billions, it would also leave millions more people uninsured.

Ultimately, the Graham-Cassidy bill failed last week. Still, Johnson has continued to call for health care reform that repeals and replaces Obamacare. In particular, Johnson has criticized Obamacare for allocating funds unfairly. "I know that California, New York, and Massachusetts, they represent about 20 percent of the population, they get close to 36 percent of Obamacare funding," Johnson reportedly told NPR last month. "It's just simply inequitable."

Johnson, it seems, would rather spread funds equally amongst the states so that states have more control over their health care systems. Giving control to the states is a fundamental tenet of the conservative ideology, but to paraphrase the Congressional Budget Office, there's no way to know how states would choose to spend the money, making it nearly impossible to estimate how many people would be able to secure insurance.

Internationally, health care is widely recognized as a fundamental human right. The World Health Organization recognizes the right to "timely, acceptable, and affordable health care," while countries from Canada to Qatar offer universal health care for their citizens. As Johnson's statements on Friday show, Americans still have to fight for their own right to health care.