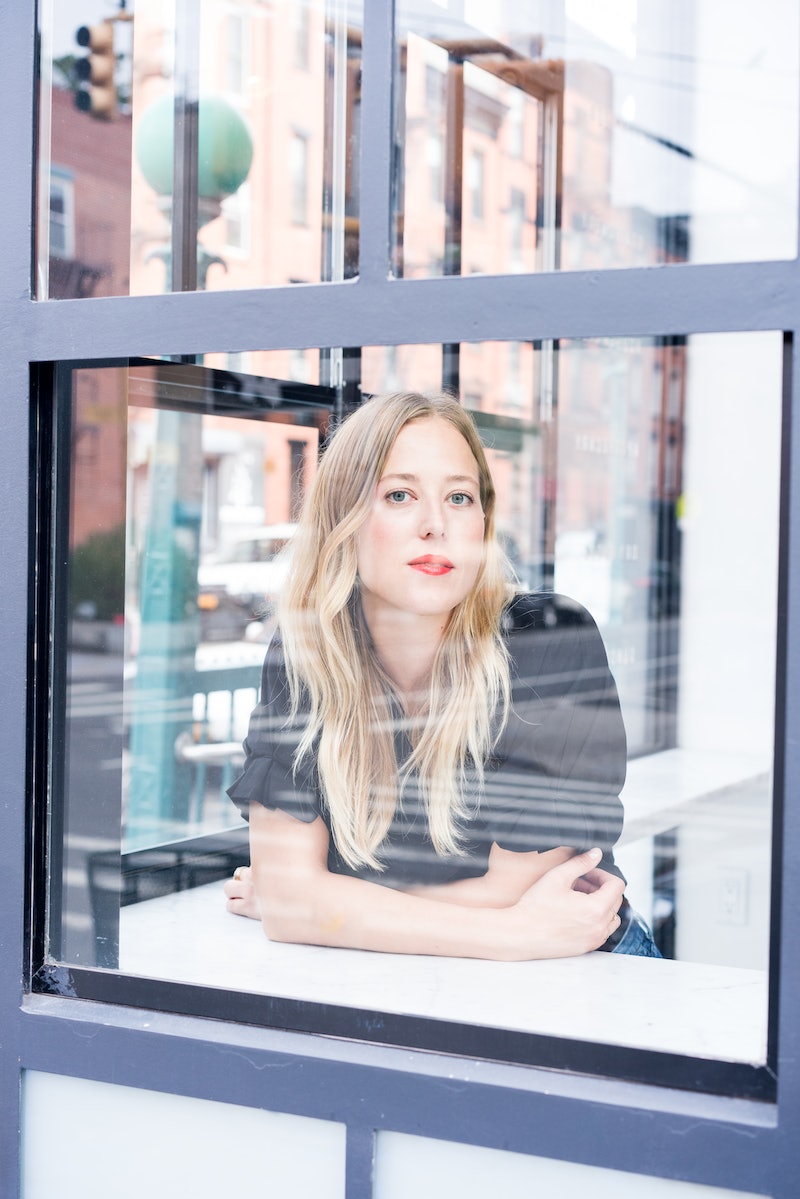 Almost everyone has heard of it, 52 percent of adults have reportedly tried it, it's legal (to varying degrees) in many states, it's poised to become a $50 billion industry, and yet it's still tricky to talk about weed. It's a fact that was made evermore clear when a long list of professional, well-known, and well-respected women in media declined to interview Verena von Pfetten because they had concerns about aligning with "the cannabis space." Do they want to support her and her lifestyle brand Gossamer, a bi-annual print magazine for, as the tagline describes, "people who also smoke weed"? Of course they do. Are their concerns about aligning with weed valid? Unfortunately, yes, they are.

Von Pfetten is trying to change that perception, though, and I, as her best friend and as someone who has a vested interest in the success and timely execution of Bustle's 2018 Rule Breakers issue (hello, I'm Lindsay Mannering and I'm SVP of Editorial at Bustle Digital Group), am here to help.

Von Pfetten and I have been talking pretty much every day since we first met 12 years ago, which has been great for me, since she's always been 10 steps ahead of trends (publications and brands such as HuffPost, Lucky, Glossier, ASOS, and Instagram have all benefited from her touch). She makes me, and everything else she encounters, cooler and smarter. And she's not afraid of breaking any rules in the process.

LM: What led you to start Gossamer?

VVP: My friend and co-founder David Weiner came to me and said, “Would you ever be interested in starting your own thing?” He was the one who mentioned cannabis, and it hadn't ever, ever, ever, ever crossed my mind that that was even an industry that existed, let alone one that I could, or would, want to participate in. But, the moment he said it, I was like, “That's actually, really something interesting.”

There were obviously existing publications like High Times and more, but they weren't necessarily reaching the same audience that was reading the publications that I had previously worked for. And that felt like a big opportunity to me.

LM: But it must have been nerve-wracking to start a publication around weed. When you're meeting with investors, or describing to others what you do and what your company is about, how do they react?

VVP: It totally varies. It's definitely gotten easier. For better or for worse, there's been a ton of media coverage around the cannabis industry and how they call it the Green Rush, and how many VCs are entering the space. And there's all the pieces about weed and yoga, or how weed has gone high-design. So all of those contribute to the idea that this is a cool thing to be a part of, or an exciting thing. The reality of that, though, is that that's also incredibly problematic.

Let's not forget, there are people in jail. I get interviewed, and I get press, and I get awarded "rule breaker" of things, which I'm excited by, but what makes me angry is when we talk about weed as this popular, trendy, exciting, cool thing, without acknowledging the incredible disparity around who gets to participate in it. And largely who gets to participate in it really depends on the color of your skin, and your socioeconomic background.

LM: What excites you most about the weed industry?

VVP: Right now, there is a legal cannabis industry that is being built from the ground up, and there's an incredible opportunity to build it in a way that is inclusive and diverse, such that you don't wake up 50 years, or 100 from now saying, holy shit, we have to try and undo, and re-break the glass ceiling, or re-makeup this industry so that it actually reflects the incredibly diverse community of people who participate in it. I think cannabis is going a long way to do that.

LM: To me, Gossamer breaks three rules. One, obviously, is the fact that it's in the cannabis space, since that still feels rebellious. Can you guess the other two rules I think it breaks?

VVP: I think it breaks the rules of what we think media should be. Is that one of them?

LM: Yes! Well, I had written down just, "print." With all your digital experience, why did you decide to go back to the dying industry of print?

I am addicted to my phone. I stare at it constantly. I go through phases where I try to delete Twitter so that I just don't open it. I wanted to be able to drive people away from their phones and their computers and say, 'Here is a beautiful object.'

VVP: I am addicted to my phone. I stare at it constantly. I go through phases where I try to delete Twitter so that I just don't open it. I wanted to be able to drive people away from their phones and their computers and say, “Here is a beautiful object.” Maybe you flip through it at a magazine stand, and that's your entire experience of it, fine. Maybe you take it home. Or, maybe you spend six months picking it up and putting it down, or read the whole thing in three hours on your couch on a Sunday.

VVP: Yep. Yes! Right, I'm making the conscious decision to read this thing right now. It wasn't pushed to me, it wasn't just flashed in front of me, attacking my day. It's a choice.

LM: The third rule that Gossamer breaks, and we've kind of touched on it already so I'll just tell you: I think being a woman founder is unfortunately, breaking a rule.

VVP: Totally. After about 20 meetings with potential investors, David and I were having coffee, and he turned to me and said, “I have to ask this, and I hope you don't mind, but do you find that in the meetings” — because 99 percent of these meetings were with men, and predominantly white men — he said, “Do you find that the men only look at me and only ask me the questions when we're talking?”

And, I said, “One thousand percent. Thank you for noticing that.” The fact that it was so pervasive that he noticed it and had to mention it to me, actually made the whole thing even more jarring.

More recently, in an incredibly consistent manner, when we are being set up for meetings or appointments, very, very often the person on the other side doing the scheduling or reaching out to us for the meeting assumes that I am David's assistant, and I will handle his calendar, and do the scheduling. And it's fascinating to me, because there's nothing other than a male and female name in someone's inbox. And, that is enough for whoever that person is on the other side to say, "Oh, this must be David's assistant or secretary, and this person is responsible for the administrative duties while he is the person taking the meeting."

LM: How do you choose which battles that you fight? What's your process like for determining when it's worth speaking up?

VVP: I try with subtlety. Every now and then I do feel like I have to get firm. Every little time I can point sexism out to someone else, maybe that will help, and maybe they won't do it to the next person.

More like this
Watch Jacinda Arden’s Devastatingly Honest Resignation Speech
By Sam Ramsden
At 28, Rosie Perez Risked Her Career To Stop Playing Stereotypes
By Gabrielle Bondi
24 History-Making Black Women You Probably Didn't Learn About In School
By Ayana Lage and JR Thorpe
25 Inspiring Quotes From Black Women To Celebrate Black History Month
By Kyli Rodriguez-Cayro and JR Thorpe
Get Even More From Bustle — Sign Up For The Newsletter
From hair trends to relationship advice, our daily newsletter has everything you need to sound like a person who’s on TikTok, even if you aren’t.