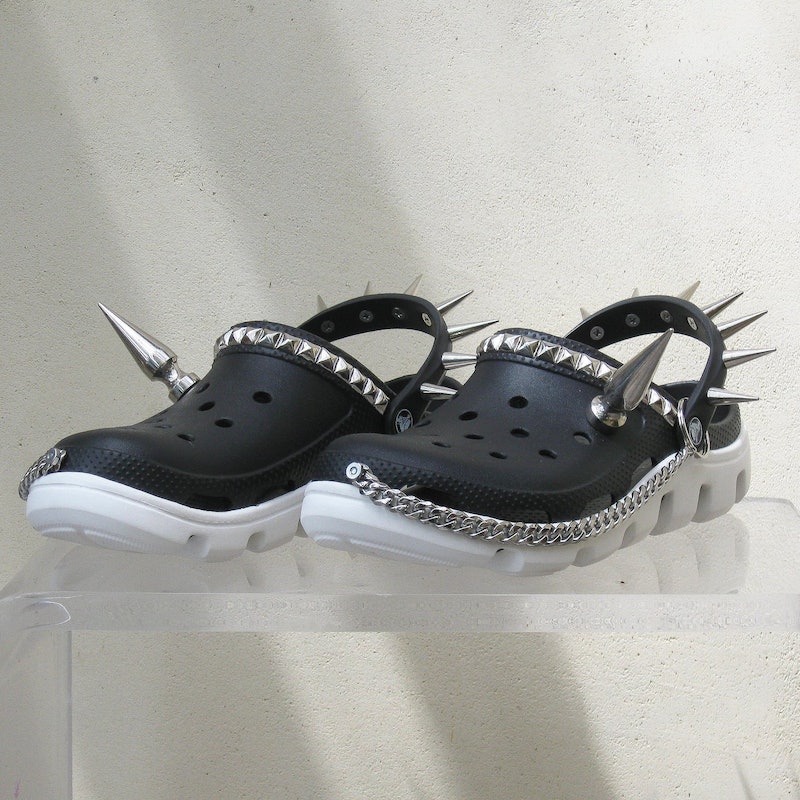 Love them or hate them, Crocs have a way of sneaking their way into runways and wardrobes. The rubber shoes have had something of a re-branding the last couple of years, where the label has teamed up with iconic designers and came out with playfully kitschy designs. And that now includes goth Crocs. (Offered in sizes 6 to 15.)

Goth Crocs answer the question, "What if Crocs had a wallet chain?" One person was finally brave enough to see what the answer to that would look like. Garbage Boy is the creator of goth Crocs, and he sells the spiky shoes on his Etsy store, Heavy Cream Store.

"Goth Crocs is like 'what are two things that really don't feel like they should go together?'" he shares in an interview with Insider. "I was pushing just how far you can take goth and the new emo trend."

Part of the fun of Crocs is that they look like shoes that shouldn't be worn outside of the garden. So re-purposing them and turning the clogs into a fashion accessory gives the shoes a subversive edge.

Garbage Boy buys the Crocs retail, and then hand modifies them to give the clogs a gothic flair. He takes nickel plated spikes and pops them into the back shoe band of the rubber clogs. Garbage Boy also adds one massive spike on the side of the shoe, using the spike like a Jibbitz.

In addition to the spikes, Garbage Boy also adds a row of studs as extra hardware on the front of the shoes. He also takes a high sheen stainless steel chain and strings it on the side of the clogs. This chain is meant to mimic a wallet chain that is usually present in an emo outfit.

The Crocs are unisex, and the line has an inclusive size range. The rubber shoes are offered in women's sizes 6 to 15.

You can also play with the shoes and add your own extra flair to them. For example, in the Etsy store photos, Garbage Boy demonstrated how you could add an extra wallet chain to the clogs. If you wear capri pants that have loops on the hem, you can add a chain from the bottom of the pants to the Crocs.

Garbage Boy also has a sporty version of the goth Crocs. Right now the trainers seem to be in prototype mode, since only one pair is available. The shoe in question is called the Goth Croc Trainers, and the clogs feature an athletic white base. The chunky white platform of the shoe adds even more contrast to the clogs, since now they're both gothic and jock-ish at the same time.

Garbage Boy has to import the trainer Crocs from Australia, so if you want this version you have to contact him with your shoe size and he will custom order it.

The goth Crocs are unexpected, and because of it they're a fun addition to any closet. As one reviewer wrote, "Honestly [I'm] really glad I bought these they're so funny and cute and I adore them."

Bring out your inner emo kid with these unexpected shoes.