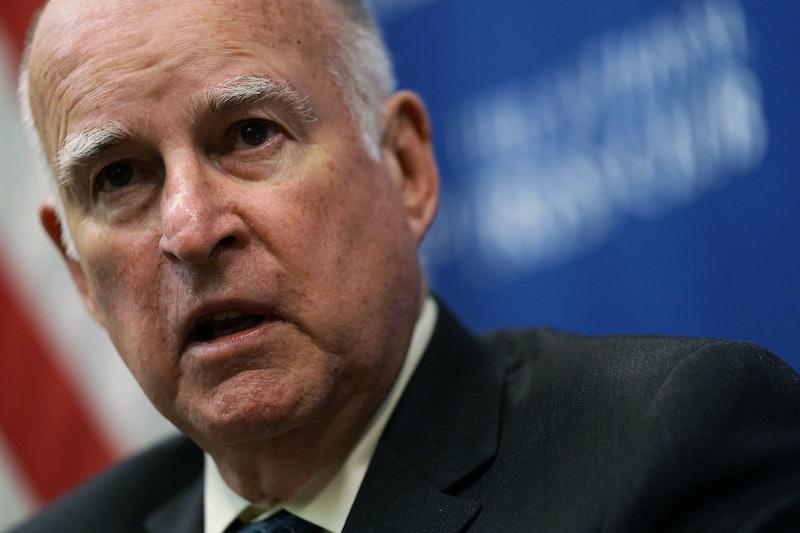 It's not even 2019 yet, but speculation is already raging about which Democrats will announce a presidential bid. And the governor of California, who himself has ruled out a run, weighed in during an Associated Press interview. Gov. Jerry Brown suggested white men running in 2020 shouldn't be an issue, adding that white men are likely to be in charge "for quite a bit of time."

"What's wrong with white men?" Brown told the AP. These individuals will "probably be running things for quite a bit of time," he continued. "Look, it's not the skin color, it's who's the right person with the right set of qualities to lead the nation."

Some people questioned his statements on social media on Friday. Brown has served as California's governor for four terms, and this one is his last; Gavin Newsom was elected to replace him in November.

Brown's statements are perhaps unsurprising for an outgoing governor that was labeled by The New York Times as "the face of California's old order." In an interview with NPR earlier this month, Brown implied that Democrats have recently shifted too far to the left. "The weakness of the Republican Party has let the Democratic Party, I think, get further out than I think the majority of people want," he said.

But his openness to white men dominating the Democratic ticket is shared by many. Since July, CNN has regularly assembled a list of the top contenders for the Democratic presidential nomination in 2020. Its first ranking of 10 candidates included three women, and just one woman of color, Kamala Harris. The other three women — Elizabeth Warren, Harris, and Kirsten Gillibrand — came in at second, third, and fourth places, respectively. Joe Biden topped the list.

Since then, these women have sometimes risen to CNN's highest rank (Warren in September and October; Harris in November), and Amy Klobuchar, a senator from Minnesota, has been added. Still, the list remains dominated by white men — which means that as far as one leading network sees it, the 2020 field will be, too.

Of course, this isn't only CNN pundits asserting its preferences. The list tries to consider who American liberals want as their next presidential candidate, and many polls suggest that white men are currently leading the pack.

A poll from Democracy for America taken at the end of November and beginning of December gauged their activists' support of 23 potential 2020 candidates. Bernie Sanders came in first with a 36.14 percent plurality of the vote. Joe Biden and Beto O'Rourke were behind him with 14.88 percent and 12.34 percent, respectively; Kamala Harris was next, with 6.95 percent. She was one of seven women offered as choices on the list (the others were Tulsi Gabbard, Stacey Abrams, and Maxine Waters).

A different survey of leftist activists — a straw poll from MoveOn.org earlier this month — showed similar results. O'Rourke, Biden, and Sanders held the top three places, in that order and by narrow margins. Harris and Warren took the fourth and fifth rank, respectively.

It remains to be seen who will secure the party's nomination in 2020. But one thing's for sure: When that moment comes, Brown will no longer be heading politics in the country's largest liberal state.