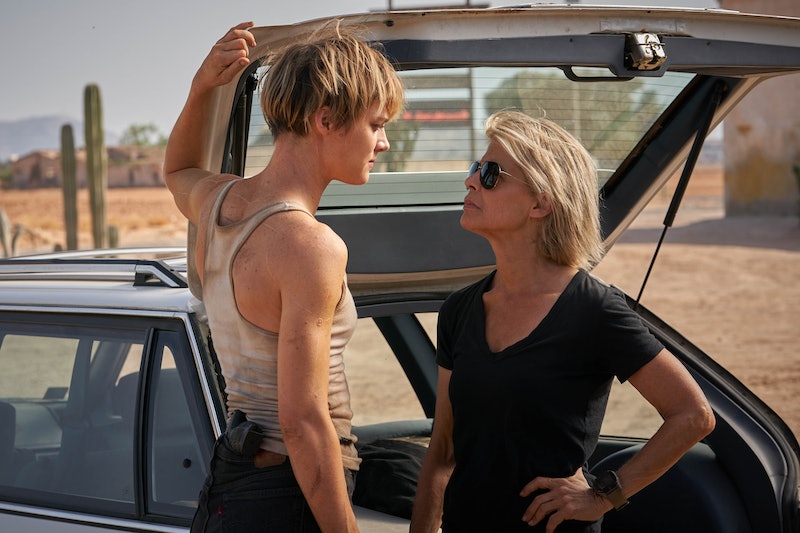 Every action movie with a token heroine can step aside. Terminator: Dark Fate features a multi-generational trifecta of world-saving women: Dani Ramos (Natalia Reyes), a terminator target and thus vital to the future of humanity; Grace (Mackenzie Davis), her augmented human protector from the future; and Sarah Connor (Linda Hamilton), the franchise's O.G. badass, returning for the first time since 1991's Terminator 2: Judgment Day. The movie, out this Friday, retcons everything that happened after the acclaimed second installment and sets the 35-year-old series on a new path. It wasn't always easy navigating, however, and some course-correcting happened along the way. For one, the dynamic between Grace and Sarah, Dani's two protectors, was totally different on the page.

"Yeah, [the writers] had written a lot of snipey, petty competitiveness for our characters," says Hamilton, speaking to Bustle over the phone from the film's Los Angeles press junket. "[Davis and I] really tried to make it come from something, and it just didn’t happen ... Of course, that’s a real device that they use in films, you’ve got characters on a mission, but there has to be some conflict to make it interesting... but that’s just not true. We thought that it reduced us to petty middle schoolers, and we were constantly trying to work against that and basically just eliminated that from our relationship."

Sarah makes her entrance in Dark Fate in the middle of Dani and Grace's first flight from the Rev-9 terminator (Gabriel Luna) who's been sent to kill Dani for reasons unknown to her. In the timeline established by this movie, the T-800 (Arnold Schwarzenegger) had caught up with Sarah and her teenage son John, the future leader of the resistance, years before. To avenge her son's death, Sarah has become a terminator hunter. She doesn't know anything about the mission to save Dani, so when she and Grace first encounter one another, they're certainly wary.

"There are moments where we are definitely women with a likeminded mission, but different approaches," Hamilton continues. "So that was enough to power some conflict, but [do] you just want to see two women snapping at each other? It just seems like a cheap device. And I think we’re much richer for not playing that."

It's not as though the pendulum then swung far in the other direction. What you see onscreen is two women who come to respect and trust each other as they join forces — even to say that they like each other might be overkill. But the point is that there wasn't any rationale in the narrative for them to be antagonistic throughout.

In a separate phone call, Davis says that she and Hamilton didn't "really [rewrite] anything" that was in the script and praises the collaborative nature of director Tim Miller. "It’s what happens in every movie," she says. "You have an idea of [characters], and then they get cast with flesh and blood people, and through rehearsals and preparations, things just shift a bit ... The more time Linda and I spent together and worked on the characters and worked with Natalia, the less we could find the justification for that within our own relationship."

As it is, there's no inexplicable rivalry to take away from an otherwise satisfying team-up between Terminator franchise veterans and new blood. It's not just a big deal for fans that Hamilton is back in action as one of the most legendary characters in the genre. The actor herself is "very devoted to Sarah Connor" and was determined to create an authentic progression of her, even though it took the team "a long time to really nail down" her arc.

"How is Sarah going to respond to [John's death]? Who is she today, with the changing circumstances?" she muses. "Jim" — which is what she calls producer James Cameron — "actually considered writing a version where she’s just f*cked up and drunk, like Rooster Cogburn in True Grit, throughout the whole film. Which is kind of a fun idea, but then when you’re adding the element of weapons and guns..." Hamilton laughs. "That didn’t last long, that idea."

The result of that excavation is the world-weary loner we see in Dark Fate. The actor says that she "worked for a year" to find in herself "the broken, sad, grieving, disappointed, sorrowful person that [she] knew [she] had to come up with" for this film. "Not pretty work," she adds wryly.

Grace, meanwhile, is living through her tragedy when the film begins. Dani's survival is essential to the survival of Grace's crumbling world. Her trip to the past is a Hail Mary mission, and her inhuman physical ability is nothing to celebrate. In a flashback (or a flashforward, depending on how you look at it) audiences see the moment when Grace has to accept mechanical enhancement.

"It’s not natural and there’s a consequence to it and the consequence is enormous for Grace," Davis says. "Without giving stuff away... you can’t do something like that to your body and not have severe repercussions."

Of course, being in a Terminator film requires some physical modifications of its own. Both actors trained hard, not just to look strong and capable, but to actually be able to complete the stunts and choreography that were required of them. Davis won't say that she enjoyed the process, but calls it "a cool feeling" when she completed a particularly intense stunt involving a plummeting hummer over several nights of shooting. "Oh, my body is essential to my survival right now," she remembers thinking. "I started to feel like, 'I did that thing, and nobody in my life could have expected it.'"

For her part, Hamilton is familiar with irrational standards of the moviegoing public. "The first thing that you have to come to terms with is that people are going to be bitterly disappointed that I don’t look exactly the same as I did 28 years ago," she laughs. So, to "immediately disrupt anybody's expectations," she dyed her dark hair white. "I was like, man, we’re just gonna own the fact that it’s been 28 years and not attempt to try to be what I was," Hamilton says. "Because I’ve got so much more to offer."

And it seems that the franchise does as well. Cameron has spoken of Dark Fate as the start of a new trilogy. While Davis and Hamilton's place in that future isn't set just yet, they made sure that the basis was as grounded as possible.