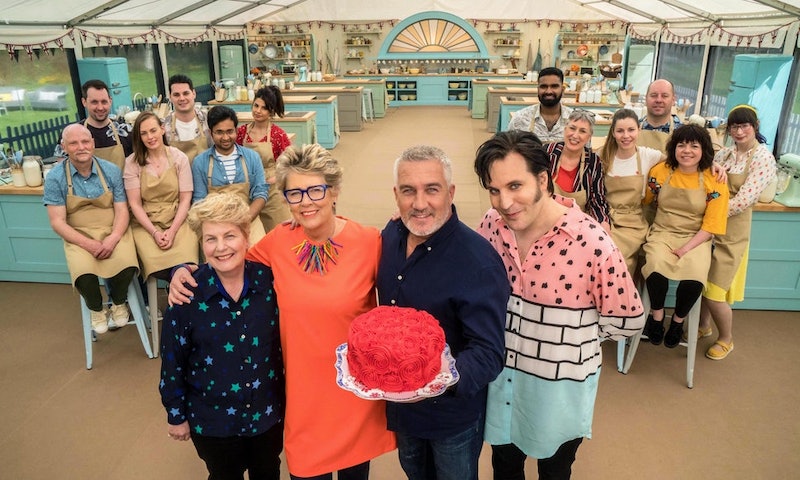 In 2016, scandal struck the Great British Bake Off tent: the producers of the baking show, aired on the BBC since 2010, announced it would leave the broadcaster for Channel 4. At the time, the BBC attributed Love Productions' decision to a desire for more money, but the company denied the move was motivated by greed — and now, Great British Bake Off producer Richard McKerrow has accused the BBC of "bullying" the production company, saying the show would have "died" without the switch to Channel 4.

Speaking at Leeds Trinity University, as the Daily Express reports, McKerrow said, "We really had no choice. I think Bake Off would have died if we hadn't moved." McKerrow, who co-created the Great British Bake Off with Anna Beattie, added, "What people don't know is the fact that three years before we left the BBC, the relationship started to deteriorate."

He continued, "Unfortunately broadcasters bully independent producers and the BBC is the biggest bully of all and I don't think that is healthy for the industry. I felt bullied. There's an arrogance that the BBC has that is not good for the industry."

McKerrow also challenged the depiction of Love Productions as greedy, saying, "It was a decision made on ethical grounds and I include receiving a fair price as ethical." He added, "I think it is perfectly ethical to ask someone to pay you a salary for what you are doing. And yet there was this 'All they want is money' like money is a grubby issue. It is a real issue. The move has been characterised as greedy producers going for the money. I say simply we did it to protect the format."

Love Productions announced the show would be leaving the BBC in September 2016, as the Radio Times reports, saying in a statement, "After an extraordinary six-year journey with the BBC, Love Productions announces with regret that it has been unable to reach agreement on terms to renew the commission of the Great British Bake Off."

The BBC released a statement indicating the production company left in pursuit of more money, saying, "We made a very strong offer to keep the show but we are a considerable distance apart on the money. The BBC’s resources are not infinite. GBBO is a quintessentially BBC programme. We hope Love Productions change their mind so that Bake Off can stay ad free on BBC One." McKerrow subsequently announced that the show would move to Channel 4, calling it "the perfect new home" for the show.

Since then, relations between the BBC and Love Productions have been tense. Original presenters Mel Giedroyc and Sue Perkins said they would not follow Bake Off to Channel 4, saying, "We are not going with the dough," while judge Mary Berry soon followed suit. In 2014, Love Productions accused the BBC of copying the Bake Off format with hairdressing competition Hair and amateur art contest The Big Painting Challenge, as the Guardian reports, a dispute settled after the production company threatened to sue. A senior BBC source reportedly told the Telegraph in 2016 that the broadcaster agreed to a financial settlement to prevent the case going to court. I have contacted representatives of both Love Productions and the BBC for further comment, and will update you as soon as I hear back.

And last year, the BBC criticised Channel 4's decision to schedule the Great British Bake Off at the same time as BBC rival show The Big Family Cooking Showdown, calling it a "cynical move." Channel 4 denied the accusation, with a spokesperson telling The Guardian, “We made the decision about where to schedule The Great British Bake Off a few months after acquiring it and we haven’t moved it since then. It is in the original Tuesday evening slot where the majority of past series have played.”

The BBC declined to comment on McKerrow's allegations — but in happier news? Applications are now open for the next series of the Great British Bake Off, closing on Jan. 6, 2019. Fancy yourself the next Rahul Mandal, Kim-Joy, or Ruby Bhogal? Best get that form filled out!