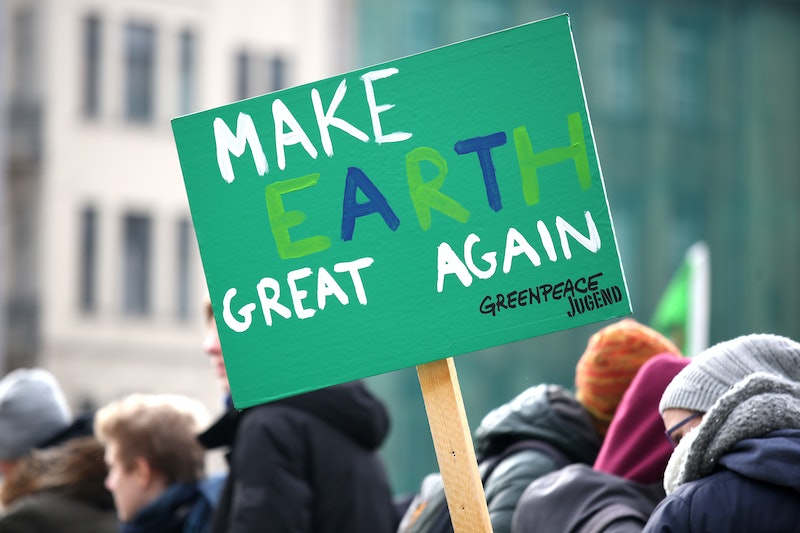 Carbon neutrality for the United States within 10 years, a universal jobs guarantee, and health care for everyone — such proposals sound miles more progressive than Congress' recent political reality. But freshman Rep. Alexandria Ocasio-Cortez and some of her colleagues are trying to bring them a step closer to fruition with the so-called Green New Deal. Until today, the actual contents of the policy were undefined. But now, Green New Deal details are here — and the proposal is truly revolutionary on numerous levels.

"Even the solutions that we have considered big and bold are nowhere near the scale of the actual problem that climate change presents to us, to our country, to the world," Ocasio-Cortez said in a Thursday interview with NPR. "And so while carbon taxes are nice, while things like cap and trade are nice, it's not what's going to save the planet."

The House resolution that put the Green New Deal forward is non-binding, which means that it wouldn't actually spark the creation of the new policies it lists out, as NPR explained. Instead, passage in the House would essentially send the message that these are the types of programs Congress aims to prioritize in the coming years. And passing this particular non-binding resolution would be a huge embrace of progressive policy.

The Green New Deal places the environment and preventing the crisis that climate changes prevents at the top of its priority list. All of the infrastructure and other improvements put forward will involve a lot of job creation, though, and the proposal states that this process will also upgrade "the basic economic securities enjoyed by all people in the US to ensure everybody benefits from the newly created wealth."

The plan for the Green New Deal argues that rather than a massive expenditure, it's actually a massive investment in America's future. That doesn't erase the amount of government spending that would have to go into it, though, which is only one of the reasons critics see it as unrealistic, as NPR noted. Even this non-binding resolution looks fairly impossible in the Republican-controlled Senate, for one thing.

There are also other elements of the plan that experts say are unlikely to actually pan out, according to NPR. For example, its goal of carbon neutrality in 10 years would be unlikely in the best of circumstances, and its plan to "overhaul our entire transportation system" includes steps such as taking combustible engines off of roads and nearly getting rid of air travel.

However, Axios reported on Wednesday that lawmakers are already lining up to support the Green New Deal. And as Vox explained, increased discussion of these progressive environmental policies could actually put them a step closer to being realized. In short, introducing this bill doesn't mean that the United States is any closer to solving the problem of climate change — but environmental advocates can still celebrate that the plan is finally out in the open.