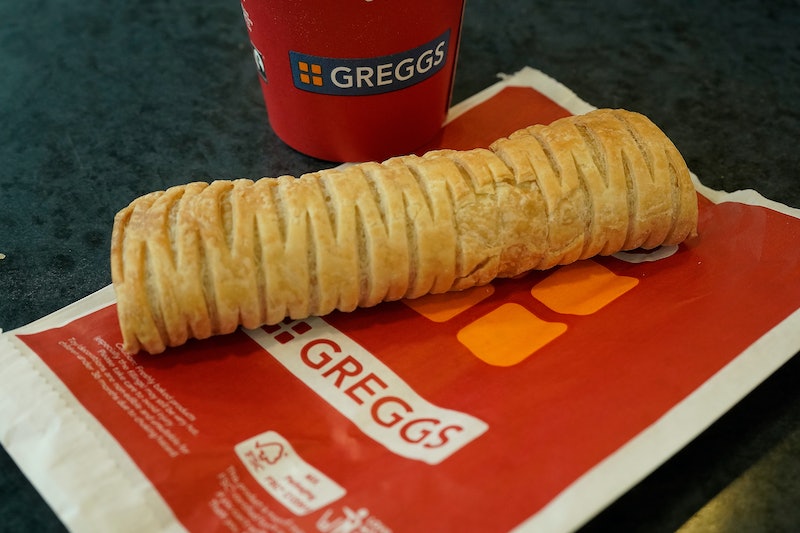 Greggs. The last bastion of delicious bready goodness that you know will satiate all of your naughty but nice needs. And at a price that doesn't break the bank or your heart. Long known for its succulent sausage rolls, Belgian buns, steak slices, and of course a whole host of beige brilliance. However, in recent years, they've kind of got with the times. Which is always a tough thing to do while keeping your brand identity. They've only gone and embraced veganism and news that Greggs are working on vegan versions of all their popular products will have vegans across the nation squealing in delight.

I know, it almost makes you want to kiss the nearest vegan to you. And if you're vegan yourself, you can just kiss yourself. Because guys, this is huge news and not some silly rumour. This info has come right from the dang top. As in their big boss, Gregg's Chief Executive Roger Whiteside. He spilled the (cheese and) beans (slice). Pretty 52 reports that all of this news came out while Whiteside appeared on LBC. Appearing alongside the famous (or infamous depending on who you ask) Nick Ferrari, he let listeners in on the goss: "I will say we are plugging away at seeing if we can come up with a vegan version of all our top-selling lines."

The move is a shrewd one, considering the rise of veganism in a world where people are more and more astute as to the perils of the meat and dairy industries. And the damage they can cause to the planet, our bodies, and, of course, the animals themselves. Whiteside made it clear that he is well aware that people are looking for vegan options:

"Obviously people want a vegan option. If we can succeed in doing that and produce something that tastes just as good as the meat version, then that will sell very successfully. That's what's been shown with the vegan sausage roll."

Holy moly and jeeze Louise. This is some serious food goss. I can't even deal with it right now. But it is totally a no brainer. Especially after the extremely positive response to the now much lauded vegan sausage roll. The Guardian reported back in May that shares for the bakery brand jumped more than 13%. Which meant it was the best performer on the FTSE 100. And all of this after Greggs reported an "exceptional" 11% rise in like-for-like sales. Speaking at the time of the reported boost to sales, Whiteside made it clear that the vegan sausage roll was the reason for the impressive hike in sales. The chief executive said:

"More people are coming. Awareness of the brand has never been higher and the vegan roll has helped with publicity and encouraging people to come and have a look at what we're doing."

So what do you expect to come from all this? Vegan pizza? Vegan steak bake? Vegan nacho cheese slice? OMG the possibilities are literally endless. Can't wait.