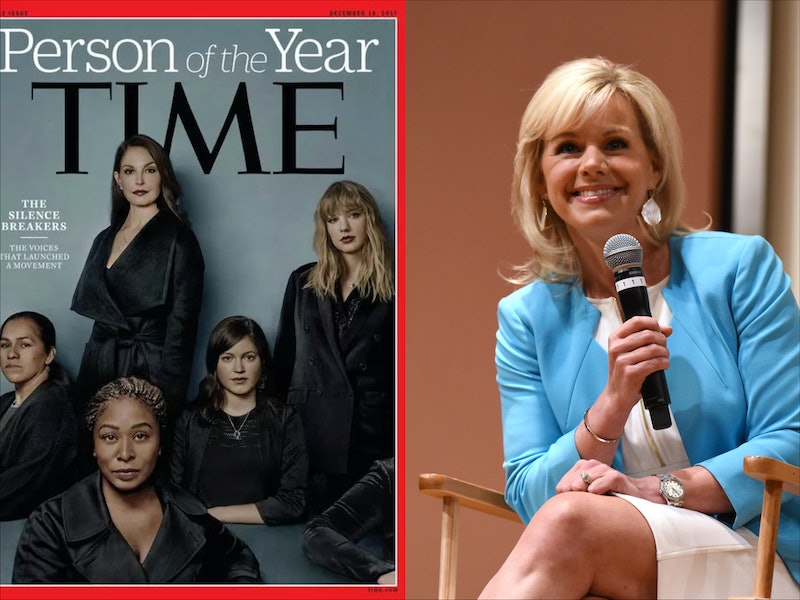 Conspicuously missing from TIME's portrait of The Silence Breakers is Gretchen Carlson, the former Fox host whose bravery kick-started a cascade of allegations against Roger Ailes. The discrepancy was first pointed out by journalist Yashar Ali, who wrote on Twitter Wednesday:

I'm really disappointed that Time did not mention @GretchenCarlson in their story. She bravely took on Roger Ailes and ignited a national conversation.

Carlson was not mentioned at any point in TIME's story, nor in its portrait or video series of notable "Silence Breakers." Of course, it's impossible to spotlight every women who played a role in #MeToo and in the movement to bring down sexual predators, but Carlson played a particularly momentous role: She was the first to come forward about the predatory behavior of Roger Ailes, risking her job in the process, which in turn led to the investigations that exposed Bill O'Reilly and Harvey Weinstein as sexual abusers. Ali described all of the above on Twitter:

They didn't even mention [Carlson] in passing. It's astonishing.

The oversight of Carlson is particularly egregious when you consider her role compared to highlighted "Silence Breakers" like Megyn Kelly and Taylor Swift, as Ali notes in his Twitter thread. While Swift has proven herself a worthy role model for women fighting sexual assault, particularly with her sharp public testimony about being sexually assaulted by a radio DJ, Swift has chosen not to use her enormous social media reach to support #MeToo or oppose Trump. Meanwhile, Megyn Kelly has refused to identify as a feminist.

Of course, Swift and Kelly have the right to do just that. Yet, Swift's advocacy efforts made the front cover of TIME, whereas Carlson's were ignored. Carlson has dedicated much of the latter part of her career to fighting sexual violence, writing an entire book about the importance of speaking out against harassment and abuse.

The former network host was not only instrumental in the downfall of sexual predators like Ailes and O'Reilly, but has also re-made herself as a women's rights champion, focusing specifically on clauses in contracts like the one who kept her from coming forward earlier. Just this week, as Ali notes, Carlson will lobby legislators in D.C. to pass legislation that would eliminate clauses in contracts stopping survivors from speaking out.

Even when her efforts to fight sexual violence went unnoticed by TIME, Carlson responded with grace. In response to Vanity Fair correspondent Gabriel Sherman, she wrote on Twitter:

It's ok making landmark change today on the Hill introducing my legislation to stop arbitration clauses for sexual harassment in employment contracts and its bipartisan! Imagine that

It is worth mentioning that TIME has highlighted Carlson's advocacy in the past: In a cover story last winter entitled "Gretchen Carlson's Next Fight," and as one of its Most Influential People in its 2017 round-up.

Earlier in the day, Gretchen had warmly congratulated all of the women named Silence Breakers by TIME, and did not mention her exclusion from the list until commentators began asking her directly about it on Twitter.

Don't get me wrong: Taylor Swift and Megyn Kelly should still be applauded for their efforts to protect women. Every Silence Breaker should be — and, for that matter, all the ordinary women and men who spoke out on social media, and all the women and men who had similar experiences that they weren't able to share. No one person can ever be considered a "better" or "more deserving" advocate than another.

Yet, just as the Silence Breakers and all who supported them should be commended, so should Gretchen Carlson. Without Rose McGowan, there may have been no resurgence of #MeToo. Without Tarana Burke, there would never have been a movement of that kind to begin with. Without the Plaza Hotel plaintiffs, there would be no lawsuit. And without Gretchen Carlson, we may never have had the New York Times investigation into O'Reilly, which, as Ali notes, inspired the investigation into Weinstein.

Like every other person on the list risking everything to protect others from suffering what they have suffered, Carlson deserves to be recognized. You can learn more about the anti-harassment bill she's supporting on the Hill here.

More like this
Beyoncé & Madonna’s “Break My Soul” Remix Honors A Group Of Black Icons
By Stephanie Topacio Long
Christina Aguilera Took A Powerful Stand At Brighton Pride
By Sam Ramsden
Are John Legend & Kanye West Still Friends? The Singer’s Latest Update Is Candid
By Brad Witter
Jane Lynch Revealed Why She’s Leaving 'Funny Girl' After Lea Michele Was Cast
By Grace Wehniainen
Get Even More From Bustle — Sign Up For The Newsletter