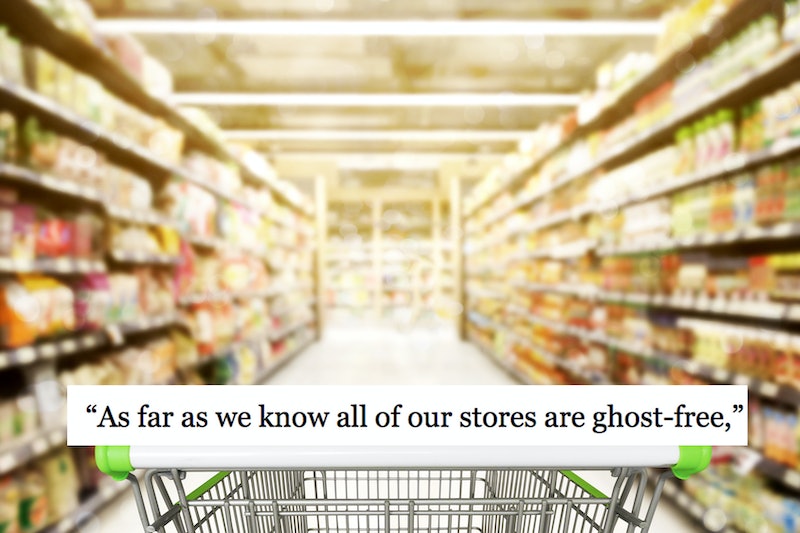 When there’s something strange in your neighborhood grocery store, who you gonna call? The members of your private local Facebook group, obviously. Thanks to a viral thread in one such group, a New England grocery chain issued a statement saying it’s not haunted which...sounds exactly like what a haunted grocery chain would say.

It started, as with most hard-hitting investigative reporting, in a closed Facebook Group for residents of Wilmington, Massachusetts. According to the Boston Globe, one person posted about a strange sighting at Market Basket, the New England grocery chain, earlier this month. “This is going to sound really really strange,” the person wrote. “But has anyone seen a ghost in the Wilmington market basket?”

In the comment section of the post, the person went on to describe the ghost as “an old Victorian era woman in her nightgown.” They said they saw her “near the frozen peas” adding “Lol.” (Frozen peas are extremely haunted. This is now spooky canon.)

Apparently, many Wilmington residents did not find it strange as the post began accumulating comment after comment in which people shared their own Market Basket ghost stories. “I’ve seen something like this but ... younger,” one person posted. “[Definitely] around that era tho, the clothes and hairstyle.” The person who wrote the original post added, “I saw her and looked away to see if anyone else saw her and when I looked back she was gone.”

One store employee who’d worked overnight shifts at the chain commented on the Facebook post, writing that they think the store is “definitely haunted,” according to the Patch. However, the employee also added, “it’s probably just your imagination taking you to crazy places after working alone for 10 hours straight.” Hmm, I don’t know. Victorian-Era Ghost Woman in search of frozen peas sounds more likely to me.

According to the Boston Globe, the Facebook post had over 450 comments on the morning of Monday, March 25. The responses were a mix of people sharing similar experiences, people laughing at the idea of a grocery store ghost, and people laughing presumably to mask their own deep-seated fear of a supermarket specter.

Because the thread was getting so much attention both in the closed Facebook group and across local and national publications, a spokesperson for Market Basket was forced to make a statement regarding the hauntedness of their stores.

“As far as we know all of our stores are ghost-free,” Justine Griffin, Market Basket’s spokesperson, said in a statement to the Globe. “But if there’s anything to it, she’s probably attracted to our Victorian-era prices.”

Also, what do you mean “as far as we know”? That sounds like legalese meant to cover-up some spooky ghost business dealings.

The grocery store ghost story even reached the government with the team for Seth Moulton, a U.S. Representative for Massachusetts’s 6th congressional district, posting a tweet about the spectral sighting. “I thought I only needed to worry about witches and ghouls in #Salem!,” Moulton tweeted. (Moulton has previously suggested he’d run in the 2020 presidential election, though he hasn’t officially announced a campaign. Is the promise of a Moulton/Victorian-Era Ghost Woman ticket what he needs to declare his candidacy?)

If you’re having fear-based FOMO, I’ll bet there are plenty of ghosts haunting frozen peas at your neighborhood grocery chain. Depending on where you live, your grocery store ghost might be near the frozen vegetable medley bags or hiding behind the Halo Top. If you’re not sure if your store carries in-store ghosts, just head on into your local Trader Joe’s and ask! Or you can peruse the real-life ghost stories that haunt the internet. The world is your ooky spooky oyster.

More like this
TikTok's Butter Board Might Be The New Cheese Plate
By Emma Carey
On TikTok, Tinned Fish Date Night Is The Latest Viral Food Obsession
By Emma Carey
Chris Kaba's Family Continue Fight For Justice After Viewing Police Bodycam Footage
By Sophie McEvoy
Deliveroo Is Selling Lotus Biscoff Cinnabons Now
By Darshita Goyal
Get Even More From Bustle — Sign Up For The Newsletter