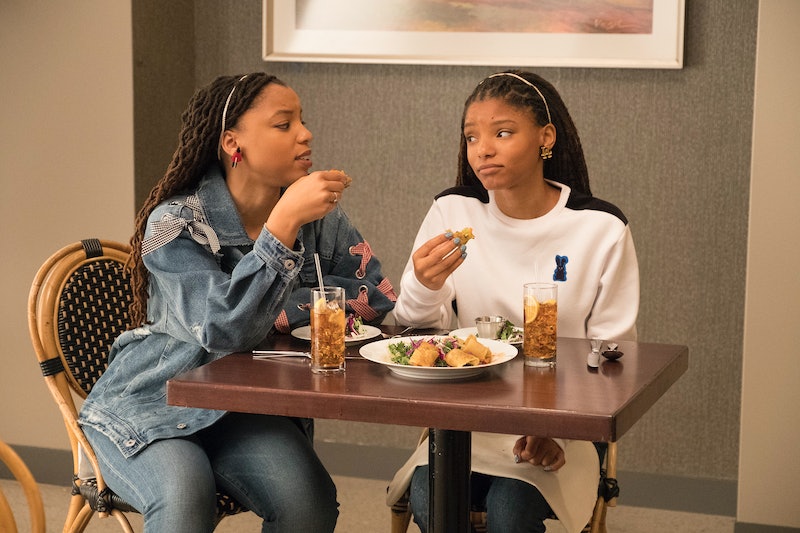 With so many dating apps at your fingertips, finding someone to text you back or "Netflix and chill" with should be a breeze. And for the most part it is — unless you're a black woman. As track stars Jazz and Sky (Chloe and Halle Bailey) came to learn on grown-ish, dating as a black woman is easier said than done.

While everyone around them smiling and living it up, Jazz, Sky, and a whole row of black women find themselves standing up against the wall as the episode opens. Suddenly an attractive black guy walks by, but he's already taken, and adding insult to injury, his date isn't black. Given the fact that it's 2018, this shouldn't be a big deal at all. Unfortunately, it can be for some black women (myself included), who occasionally feel like we're passed over by men who look like us in favor of women who don't.

Frustrated, Jazz and Sky vent about their recent dry spell to their confused friends around a table of food. The two wonder if the reason they aren't getting dates is because black men prefer white women and non-black women of color. According to Jazz, there's an unspoken list or hierarchy of the world's most eligible bachelorettes and black women are firmly at the bottom. Ana and Nomi both look skeptical at first, but eventually come to realize that Jazz and Sky are unfortunately correct.

Case in point: Jazz sends a drink back for being less than appetizing. The waiter looks offended. But, when Nomi does the exact same thing, no one bats an eye. This moment perfectly demonstrates how stereotypes and pre-conceived notions about how black women should act harm our dating lives, though the same actions garner praise when dished out by non-black women. This also applies to our hair, our style, and our curves. As Jazz put it, "everybody's always checkin' for the girl who looks black, but no one wants the girl who actually is black."

Other times, if we are accomplished and outspoken, we’re seen as too independent or full of attitude, but if we're quiet, don’t have an established career, and completely cater to a guy's needs, we’re often looked at as "gold diggers" or weak.

And in addition to stereotypes, colorism sometimes plays a big part in black women being rejected by men of the same race. Take Aaron, who quickly reassures Jazz and Sky that he's all for his "queens." But as Luca quickly points out, they are all "Egyptian and not Nubian." While its certainly his choice to be attracted to whomever he likes, it's a little disheartening to see that the only black women that catch his eye are light-skinned ones.

Men, the media, and even the beauty industry constantly make darker skinned black women feel less worthy than their lighter counterparts. And the ignorance that comes along with it is even more jarring, especially when it's from black men, most often celebrities.

For example, NBA player Gilbert Arenas found himself on the Twitter chopping block in 2017 for offensive comments he made regrading dark skinned women, saying that Lupita [Nyong'o] was "cute with the lights off," according to Ebony. The problem isn't having a "preference," it's that black women are constantly put down by men like Arenas to justify these preferences.

So what should black women do if we're having no luck dating inside of our race? According to Nomi and plenty of others out there, we should look outwards. Unfortunately, non-black men aren't exactly checking for us, either — a 2014 study of non-black men on OkCupid showed that 82 percent of them "show some bias against black women," according to a blog post on the study. Even though Vivek is clearly smitten by "strong independent black women," other men who look like him aren't impressed.

With all of this being said, it's safe to say that dating for black women is a struggle and it's understandable that Jazz and Sky are frustrated. Fortunately though, after Jazz's failed date with a fellow white student, the two sisters have a heart-to-heart and remind each other that they're more than the just a series of rejections, and that the bad luck they're having now isn't a reflection of their worth.

This has to be the most important part of the entire episode. With plenty of articles out there about why black men don't want to date black women, or what black women are doing wrong, women like me can begin to feel like we're not good enough just as we are. We find ourselves changing how we look, how we speak, and what our interests are in hopes of finding "the one."

And really, when it all comes down to it, you never really know what catches someones eye — as Sky quickly learns when she decides to ask another black student why he constantly has a white girl on his arm. Though his initial reaction was harsh and simply, "because he can," his tune quickly changed and the next day viewers saw him hitting things off with Jazz.

Does this happy ending mean all is well for black women like Jazz and Sky now? Absolutely not. But Jazz's current "win" on grown-ish does show us that while dating as a black woman is hard sometimes, being unapologetically yourself is all you can really do in the end to find love.