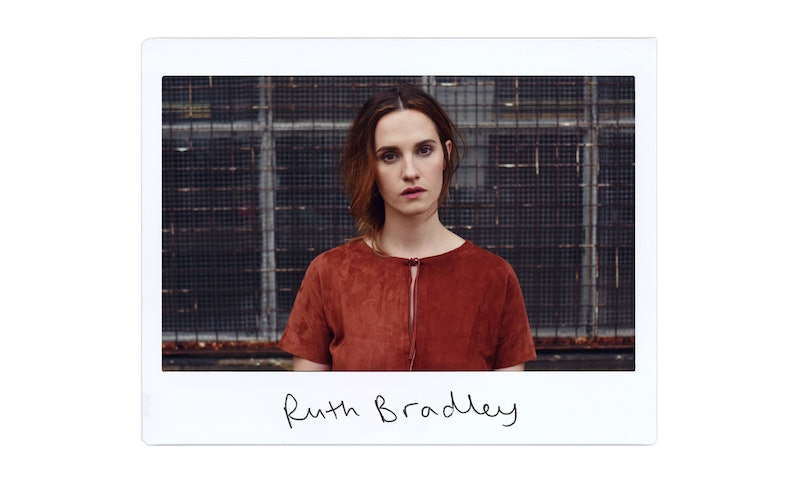 When celebrities hang out with Bustle editors, we want to give them the chance to leave their mark. Literally. So we hand them a pen, a piece of paper, a few questions, and ask them to get creative. This time, Guilt actor Ruth Bradley is leaving her mark in the Bustle Booth.

Ruth Bradley always knew she wanted to get into acting, telling Glass magazine in 2017 that, "it was just something I knew I was going to do before I really knew what it was. I remember wanting to move people through feeling something myself. Then when I started doing drama classes as a kid I realised that I could take people with me on a journey."

The star grew up in both Canada and Dublin, but moved to London when she was fairly young. "I'd already been acting as a kid in Dublin, and I went to Trinity for literally three weeks, and then I was like, 'Who's life am I living here?' So about a week after I dropped out, I left for London because I thought if I'm not doing that, I need to really, really 100% on making a career for myself and so many people were moving to London that I thought, I'd better move before I'm settled here," she told entertainment.ie.

Acting had always been in the star's family, too. Her mother, Charlotte Bradley, is a well-known actress recognised for projects such as Fair City. Ruth has previously revealed that her mother was both supportive and wary of her daughter taking on the same profession.

"She was always like, if this is really what you want to do, then go for it, but be clear in the knowledge that it's not secure and you don't have any nine to five, and there's no definites about anything," she told entertainment.ie.

Her mother clearly doesn't have anything to worry about anymore though, with Ruth thriving in the acting world. She has previously won the Best Actress award at the Irish Film and Television awards, and won the Best Supporting Actress award in 2007 for her role in Stardust, a mini-series set in 1980s Dublin.

The only aspect of her industry Ruth has revealed she finds difficult, however, is the fame side. "It strikes me as odd, because your job is to become something else - so people don't know who you are," she told the Irish Independent in 2016. "So it is kind of part of the job, but it's a weird part."

Some of Bradley's previous most well-known work includes her role in Humans as Karen, playing Wallace in 2016's The Fall, and her involvement in 2010 TV show Love/Hate, where she played Mary.

Bradley's most recent project is her role in upcoming BBC drama Guilt, where she plays Angie, an American whose uncle has been killed. The show is BBC Scotland’s first drama commission for their new digital television channel.

Speaking about her role in the exciting new show, the actor explained to Bustle what attracted her to the project. "The scripts were fantastic. I couldn’t put them down and ate every up every page- such wonderful storytelling with an array of well rounded, interesting characters." She continued: "I loved Angie because she was mysterious and dry and ultimately I hadn’t played anyone quite like her before, she had a different energy."

The future looks bright, too, and Ruth has big aspirations, telling Bustle it would be her dream to work alongside Sam Rockwell or Meryl Streep, both of whom are her acting idols.

From her opinions on reality TV to her celebrity idol, get inside Bradley's head in her Bustle Booth questionnaire below.