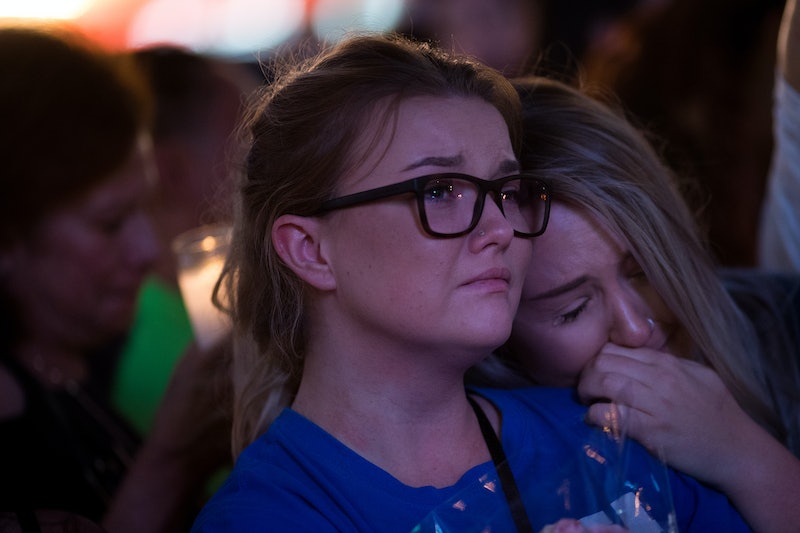 The Parkland shooting and March for Our Lives brought renewed energy to the gun control movement this year. But new data from the Centers for Disease Control and Prevention (CDC) provides a reminder that the epidemic of firearm violence was already extremely dire when that massacre in Florida shocked the country. According to a Thursday report from The Guardian, which analyzed CDC figures, U.S. gun violence deaths rates in 2017 spiked higher than they'd been since 1996, over two decades ago.

Per the CDC's Wonder database, 39,773 people died from gun wounds last year. Around 60 percent of those were individuals who took their own lives, the vast majority of whom were white men: 87 percent were male and 91 percent were white, according to The Trace. The outlet also reported that gun suicides increased by around 60 percent or more from 2008 to 2017 in Kansas, Vermont, Missouri, and West Virginia, all of which are states with relatively high levels of gun ownership.

Suicide was responsible for the greatest uptick in gun death levels, but there was also an increase in homicides. An analysis of the CDC data from the Giffords Law Center to Prevent Gun Violence found that over 50 percent of gun homicide victims were black men.

"It's unacceptable that the number of deaths from shootings keeps escalating while Washington DC refuses to even debate policies we know would help save lives," Gabby Giffords, the former Arizona representative who began the Giffords Law Center after becoming a victim of gun violence herself, said in a Thursday press release.

Giffords' analysis shows additional worrying trends in the data. On average, around 109 people were killed by guns every day last year, its report shows. More than nine of those deaths were children and teenagers.

Everytown for Gun Safety also crunched the CDC's statistics and found that more people died from guns in 2017 than from vehicle accidents. Car crash deaths have been steadily sinking for years while gun violence numbers have been increasing. "Common-sense laws to make American cars, roads and drivers safer played a key role in the steady decline of auto deaths," Everytown's John Feinblatt said in a press release, "and common-sense laws are exactly what we need to make American communities safer from gun violence."

"Come January, lawmakers should view our nation’s gun violence crisis for what it is: a public health crisis," added Shannon Watts of Moms Demand Action for Gun Sense in America in the release. Nancy Pelosi, who is on track to become the next speaker of the House when Democrats take control in January, has made it clear that her caucus will make gun control a priority.

CNBC reports that over 24 members of Congress who are opposed to stricter firearm laws were voted out of office in the midterm elections and that at least 17 of the new member-elects favor more gun control. Everytown and the Giffords Law Center were among the organizations that gave money to pro-gun reform candidates.

"It's clear that gun issues are no longer abstract," Feinblatt told CNBC. "Mass shooting after mass shooting has left an indelible mark on Americans, and this explains the success of our candidates in the House."