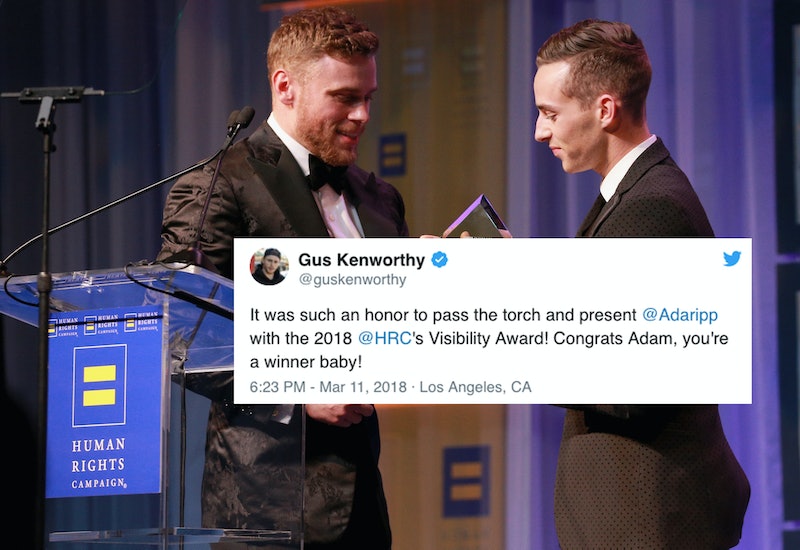 If you didn't get enough of your favorite LGBTQ winter Olympians in South Korea, you should have been at the Human Rights Campaign Visibility Award dinner in Los Angeles on Sunday for some soaring words of inspiration. Snowboarder Gus Kenworthy introduced figure skater Adam Rippon for HRC, and both shared some key insights their experience as out LGBTQ athletes and Americans. They both focused on how being themselves improved not just their game, but also their entire lives.

Rippon was the honoree, and Kenworthy explained just how much Rippon deserved the recognition for his Olympic experience — and not just the one on the ice. "He’s an inspiration to me, and over the past few months, his skating has won over the world. Along the way, he has helped cut a path for young people to see that being your true self is the best way to live," Kenworthy said while introducing his fellow Olympian as "America's sweetheart" — not failing to mention Rippon's eyebrows and their many fans.

As Rippon reached the stage, the two shared a hug that shows how the two have become more than just fellow Olympians. They're close friends, too. "I love this guy," Kenworthy said.

Rippon took on the mantle of LGBTQ visibility at the games, ran with it in his HRC acceptance speech. "I’ve learned that a champion is more than a medal. It’s a mindset," Rippon told the crowd of celebrities and LGBTQ activists. He spoke to the next generation of children who can come out and change the world:

To all the young kids out there, whether you are gay, straight, bi, trans or still on a journey of self-discovery; whether you are white, black, or any color in between, you are smarter than you think. You hold more strength than you may ever know. You are powerful. No matter where you have come from or where you are going to, there is someone who looks up to you, and they will find inspiration in your strength of just being yourself. Be a role model, and never forget that you can be someone’s champion. You are a winner. When we all come together, we can change the world.

This was a rousing finish to a speech that explored his own insecurities, not just in the world of skating. "When I was little I used to care so much about what others thought of me,” Rippon told the crowd. “I was mindful of the way I dressed, my mannerisms, the way I talked."

"I was afraid people would think I was weak," Rippon continued. "I was afraid of making mistakes. I was afraid that I wouldn’t be welcomed by the LGBTQ community because someone like me wouldn’t be the role model they were looking for. Maybe I was too gay, and maybe I was just too myself."

But that all changed for Rippon when he decided to live openly. "I remember making the choice to be unafraid," Rippon said. "I made the choice to not care what others thought of who I was. I was going to be truly me. This was the biggest and most important decision I’d ever made: To live fearlessly. To take risks. To let go of my fear of what others may think of me, and to always keep learning."

As Kenworthy acknowledged in the opening, this isn't always easy. There were haters for both of them. But Rippon's response shows how he's focused on living fearlessly. "Neither of us, especially Adam, ever toned it down. He brings his true, authentic self, on and off the ice and in every TV interview," Kenworthy told the crowd of the honoree.

The Olympics may be over, but Rippon's dedication to living as his true self goes on.