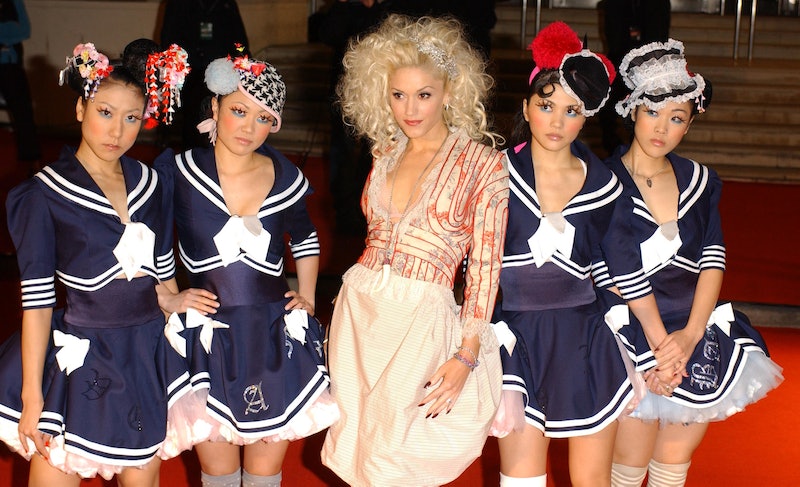 It's been fifteen years since Gwen Stefani released her debut solo album, Love. Angel. Music. Baby, which featured an ode to her love of the Tokyo neighborhood, Harajuku, and its influence on the fashion world. While she has been criticized for cultural appropriation in the years since, Gwen Stefani says she doesn't regret her "Harajuku Girls" era, and that it was a decision made out of love for "a culture I was a superfan of."

The singer reflected on Love. Angel. Music. Baby. in a recent interview with Billboard, in which she revealed that she gets "defensive" when people accuse her of cultural appropriation for her 2004 album and promotional campaign. "When [the album] first came out, I think people understood that it was an artistic and literal bow down to a culture that I was a super fan of," Stefani told the magazine, referring to the district in Tokyo and the colorful, over-the-top style culture it created.

"This album was like a dream. I went in thinking I'm going to make something that could never be possible — me doing a dance record — come true," she said. "When the Harajuku Girls came out, [my reaction] was like, you're not even real, you're a dream. It wasn't like, 'You're not real because you're Asian.' Are you kidding me? That would be horrifying!"

"I wanted to write a song that talked about my love for Harajuku," Stefani explained about the origins of her song, "Harajuku Girls" and the group of backup dancers of the same name. "When you're from Anaheim and never traveled outside of your city until you're 21 years old, it was really crazy to go to Japan."

Explaining that she was "fascinated" by Japan from a young age, she stated that she felt at home when she visited the Harajuku district, thanks to her love of outrageous fashion. "I get a little defensive when people [call it culture appropriation], because if we didn't allow each other to share our cultures, what would we be?" the No Doubt front woman said. "You take pride in your culture and have traditions, and then you share them for new things to be created.

Stefani explained that she had been asked about the Harajuku Girls often at the time, describing it as a "concept" in which she and the girls were "just having fun." While the singer didn't explicitly address the claims that the Harajuku Girls were reportedly contracted not to speak in public — they were a group of backup dancers and an entourage who accompanied her everywhere at the time — she did refute the claims that she "renamed" the girls in order to match her album title.

"We went to Nobu in London and we talked about the concept of the record ... Judging by their own personalities, I called them 'Love,' 'Angel,' 'Music' and 'Baby.'" Stefani told Billboard. "It was like we were creating a group together." The singer also stated that the quartet were "cast to be dancers — that's all," but that she felt a strong bond with them as individuals.

While "Harajuku Girls" and the girl group of the same name may have come from a place of love for Stefani, there are still many aspects of this era she hasn't addressed. In December of 2014, Stefani described the Harajuku Girls in an interview with Time as "dancers that were cast, but they became real" — as if the dancers themselves were not real people before they became part of Stefani's crew. Furthermore, the fact that she chose the names they were known by, rather than letting them make that decision themselves, similarly perpetuates the idea that they didn't exist as people without Stefani and her album.

Stefani has said for years that, for her, "Harajuku Girls" is an ode to a place and a culture that made her feel accepted and celebrated. However, based on her comments, it seems that she still doesn't understand why people feel it was appropriative.