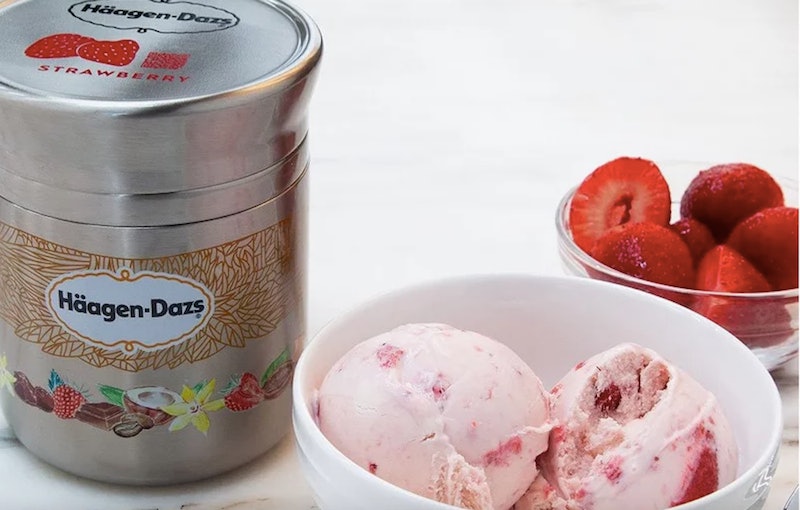 Say goodbye to the days of empty containers of ice cream pints and juice bottles piling up in your trash can — a new era is here. You've probably already seen the movement to get rid of disposable drink and food items in the news lately, with Starbucks' announcement to eliminate distribution of plastic straws in all of their global locations by 2020 and the ban on foam containers in New York City. Now, Nestlé and PepsiCo, respective owners of popular brands Haagen-Dazs and Tropicana, are jumping on the train as well — by testing Haagen-Dazs' refillable pints and Tropicana's refillable orange juice bottles. The environment wins and so do we — our favorite ice cream flavors and juices are getting an upgrade.

According to the Wall Street Journal, both PepsiCo and Nestlé are going to start testing out their all-new reusable containers in partnership with recycling company TerraCycle, Inc., which specializes repurposing raw material into new products in collaboration with a variety of corporate donors. It's meant to act as a "milkman-style" model, in which customers will have the opportunity to reuse their products' cans and bottles in an effort to avoid a surplus of plastic waste.

How does it all work? Per Food & Wine, all-new products will arrive to customers in a reusable tote bag. Once they're done using the products and need a refill, they simply schedule a time for the items to be picked up, professionally cleaned, and re-stocked. Food and Wine explains that the reusable products will retail for roughly the same price as the single-use items by the brands, but are going to require a deposit for every container (somewhere between $1 and $10). Additionally, the items will cost approximately $20 to ship — the leaders of the new initiative are aware that these costs may be a prohibitive factor for some customers.

The interesting part about the recent, global movement toward reusable products is that several decades ago, glass bottles and other multiple-use containers were the norm (In the late 1940s, refillable bottles made up 100 perecent of soft drink bottles) — but they lost traction as cheaper and more convenient single-use bottles became increasingly popular. By the year 2000, the statistics for reusable soft drink bottles dropped to 0.4 percent. The change is striking, and it's something to think about when considering the rate that plastic waste has accumulated over that time period.

Although these new projects focused on reducing waste — undertaken by some of the largest brands in the world — have great intentions, leaders at the companies still wonder if their efforts will point to success and meaningful environmental progress. “People talk about recyclability and reuse and say they’d like to be involved in helping the environment, so let’s see if it’s true," said Simon Lowden, PepsiCo's president of global snack groups, per the Wall Street Journal. When weighing your options on whether or not to make changes like switching from a plastic bottle to a reusable one, remember that your contribution is not just an inconsequential drop in the bucket. Even if it doesn't feel like you're doing much, small steps will lead toward a healthier environment.